Once the poster child of fast casual, Chipotle (CMG) is now facing a series of health outbreaks which are expected to deter both consumers and shareholders. During this reporting quarter, the CDC announced it was investigating the burrito chain for another E. Coli outbreak after 5 people in the midwest got sick. On the heels of the announcement, Chipotle stock plummeted with shares reaching a 52 week low. In fact, the stock has fallen 29.3% during the course of 2015 and expectations are that the company will continue to falter . Since the emergence of the outbreak in October, sales have plunged and analysts now believe same store sales could fall for the first time in the company’s history. 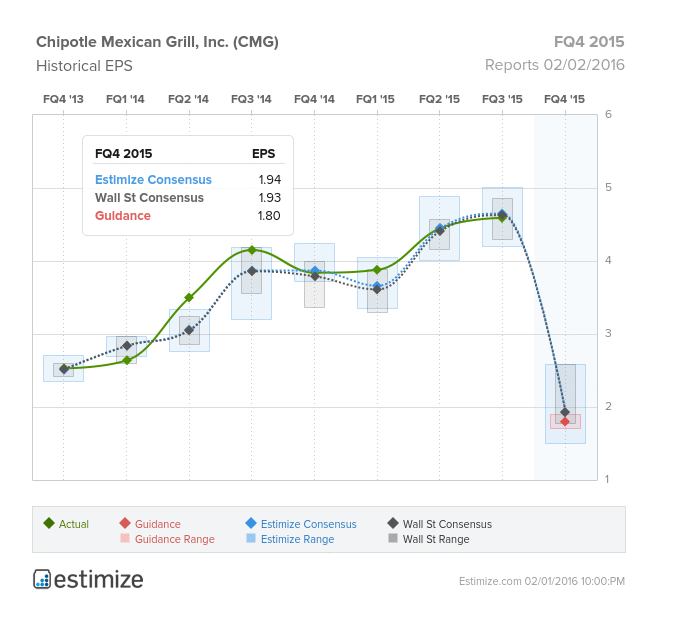 Chipotle is scheduled to report fourth quarter earnings with corporate guidance having been adjusted to reflect all publicly known information regarded E. Coli outbreaks. The company, which had already begun to slow down, expects EPS to fall over 40% from the previous quarter to $1.80. On the backs of corporate guidance, Wall Street decreased revenue and EPS estimates to $1.93 and $1.003 billion respectively. On the other hand the Estimize consensus calls for EPS of $1.94 and revenue of $1.005 billion. Compared to Q4 2014, this represents a project YoY decrease in EPS and revenue of48% and 5%, respectively. After this most recent series of outbreaks, Chipotle closed stores nationwide to revamp health and safety procedures. WIth customers weary or unable to visit Chipotle stores, the burrito chain will be faced with contracting same store sales, slower traffic and declining average ticket orders. 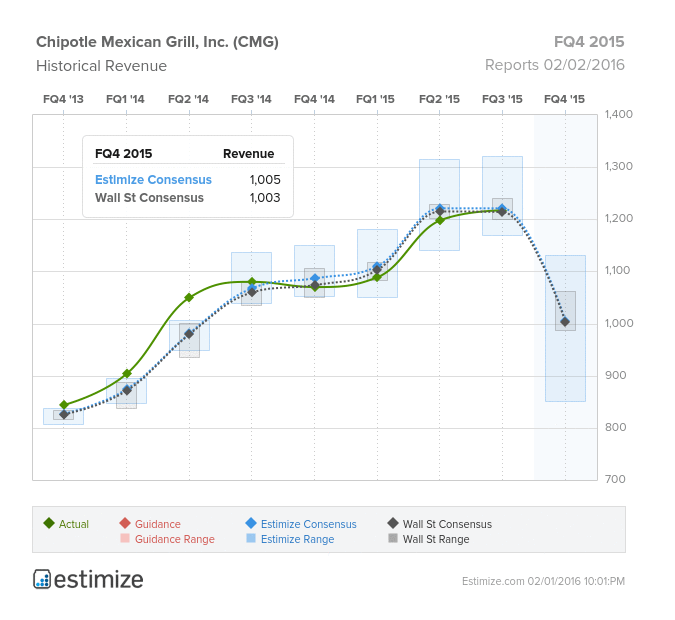 After a strong 2014 and beginning of 2015, Chipotle’s promising growth is coming to a standstill. Given the events of the past 3 months and potential for future occurrences, investors are flocking from the stock causing share prices to plunge. Despite new safety protocols, Chipotle’s freefall is expected to carry through most of 2016. In addition to health concerns, increasing wages and a potential menu price hike have dragged down investor’s sentiment for Chipotle in 2016. Even though the CDC declared the E. Coli outbreak over, it remains to be seen whether Chipotle can ever reach its pre scandal growth.

Do you think Chipotle Mexican Grill CMG can beat estimates? There is still time to get your estimate in here!