In my research and investing I stress three things: people, structure and value.  I look for companies that are controlled and managed by quality people, have corporate structures that align minority and majority shareholder interests and trade at valuations that are below fair value if not outright cheap. This post is about value.

About a year ago I wrote about an investment strategy that returned a little over 14% per annum on average in our backtest.  It achieved this by investing in the five least expensive countries as ranked by CAPE, holding for a calendar year, and then re-balancing (see post here).

As noted in that post, CAPE stands for Cyclically Adjusted Price-to-Earnings ratio.  It is like PE except that it compares the current price of a company to its earnings averaged over a number of years. PE or “Price to Earnings” ratio is a popular way to value companies, particularly those that are listed on stock markets.

2015 was the first year of tracking this strategy and the results are out. They are more or less in line with the backtest. The ‘cheap’ country basket increased by 12.1% local currency, and 2.7% in US dollars.   The best performing markets were Hungary and Slovakia, whose headline indexes rose 44% and 32%, but only 29% and 18% in USD.  The third best performing market, Czech Republic, was up a mere 1% in Koruna and down 7% in USD. Romania was largely flat and Bahrain fell by 14.8%.

The ‘expensive’ countries did not do as well.  On average they fell by 1% in local currencies, and 5% in USD.  Only Lithuania’s headline index was up in local terms, increasing by 7.4%, but down by 3.1% in USD.  Only Israel was up in USD last year. 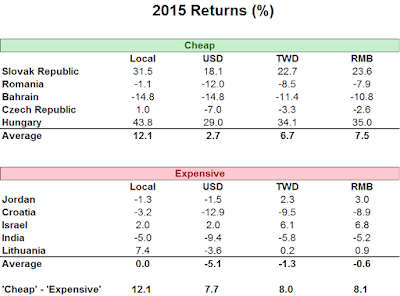 Taiwanese and Mainland Chinese investors would have done slightly better than USD investors with the ‘cheap’ basket increasing by about 7%. The spread for both was also a tad higher than for USD investors.

Relative to major indexes, the performance of this strategy in 2015 was not bad. The S&P 500 index was flat, and most markets ended the year down in USD terms.  “Emerging markets”, how most countries in both baskets are classified, fell by 17% last year according to the most followed index. This is a massive 19% out performance (see here). 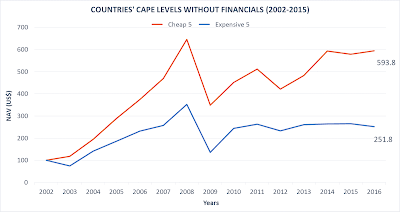 Global equity markets generally did not do very well last year.  In addition to Hungary, only a few were up more than 20% in USD.  This included Latvia (up 31%), and Jamaica (up 88%, write-up on Jamaica is here).   Venezuela increased by over 200%, but I think this number is very squishy given the country’s uncertain exchange rate.

Despite its decent relative return, the NAV of the “cheap” strategy is still below its 2007 peak. The last several years have seen a good rebound, but still not enough to break its end 2007 high-water mark.

Our list of ‘cheap’ countries is almost identical to last year’s.  Four of the five countries are still there. The only addition is Latvia.  It remains inexpensive despite last year’s increase. Hungary is no longer among the five cheapest countries after its solid increase last year.
The list of expensive countries however is completely different.  It includes two very large markets, the US and China, which is a cause for concern. Being so big, they are seen as bellwethers for much of the rest of the world.  Being expensive means that it’s more likely they will fail to increase or decrease which could put pressure on other smaller markets. This was and remains my biggest fear going into 2016.  But this was also a fear going into 2015 and China was one of the better performing markets last year despite its dramatic rise and fall.

If the first eight weeks of 2016 make a good indication of any kind, it could a be a bumpy year for global equity markets.  The US and China are down by 5% and 18% respectively.

But it’s a long year and a lot can happen in the next 10+ months.

CAPE is a long term metric. It was introduced as a way to smooth out the business cycle.  Studies point to it doing a good job of identifying inexpensive markets that tend to perform well in the long-term.

‘Cheap’ countries have many problems and tend to be in or close to a crisis.  Big markets that are inexpensive on a CAPE basis include Brazil, Russia, and Greece.  Hardly the places your investment adviser is likely recommending.

However, as written before, some of the best investments are in ugly markets and sectors when prices are low and virtually no one is expecting things to improve (see here).