The Estimize consensus is right in-line with Wall Street on both the top and bottom-line on this name. Alphabet Inc EPS is expected to come in at $8.17, with revenues of $16.9B. Both of these numbers have gradually been revised upward since the Q3 report, by 5% and 2%, respectively.

Alphabet Inc – What to Watch:  Late this past summer, the internet behemoth announced it was reorganizing under the name Alphabet Inc. Google will continue on as the company’s legacy business and include core properties such as search and advertising, while Alphabet contains moonshot investments such as self-driving cars, health care, Google-X and  smart homes, among other things. This will be the first quarter that investors get a peek into how both of those segments have performed going back two years. The reorganization and new cost cutting initiatives helped Alphabet shares increase 46% in 2015. With another favorable quarter, Alphabet is on the verge of eclipsing Apple as the most valuable company in terms of market capitalization. Alphabet’s focus on innovation and growing its already dominant search division has contributed to the recent string of robust growth. Thanks to strategic mobile initiatives, the introduction of YouTube Red, continued acquisitions and the aforementioned reorg, this should be a good quarter for GOOGL.

The Estimize community calls for EPS of $1.49, three cents above Wall Street and corporate guidance. Revenues of $1.37B are also above the Street’s $1.35B and guidance of $1.34B. Expectations began dropping after last quarter’s results were released. 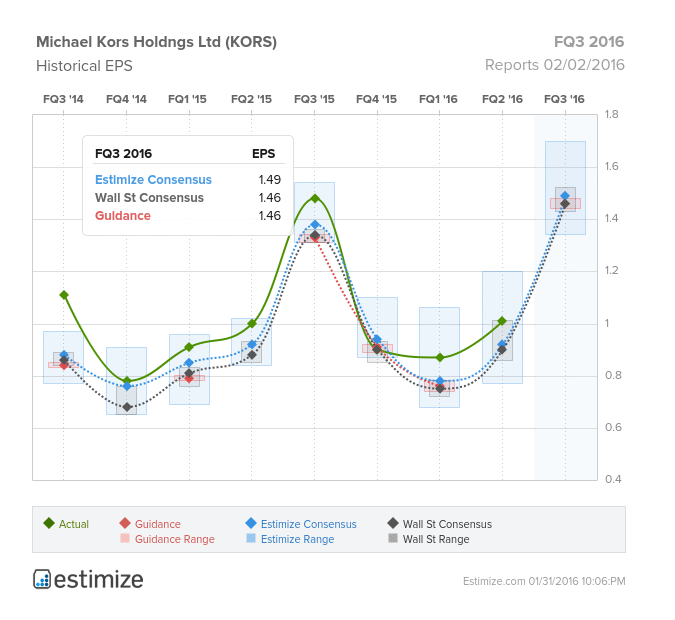 What to Watch: It was a rough first half of 2015 for affordable luxury designer, Michael Kors, missing analyst estimates on either the top or bottom line in each quarter. However, things seem to be slowly moving in the right direction, with two consecutive quarters of beats briefly lifting the stock, which lost almost half of its value over the course of the year. The concern with KORS has long been that it was losing its cache. It has oversaturated the market with both high-end and lower-end accessories, diluting the overall brand. Add to that currency pressures from the strong US dollar, which are expected to detract as much as 6 cents from the FQ3 2016 report. The holiday shopping season, which all retailers heavily rely on, was one of the weakest since 2009, making it unlikely that retail sales from the period will be able to boost KORS. Despite the slew of bad news, Kors is plowing ahead, investing in new brick and mortar stores as well as their ecommerce platform. Encouragingly, we got good news from the premium accessories space last week when Coach reported better than expected results. We’ll see if Kors can continue that momentum.

The Estimize community is looking for EPS of $3.07 on GILD, eight cents above the Wall Street consensus. The revenue consensus of $8.2B is only slightly above the Street’s estimate of $8.1B. Estimates have been rising into the report. 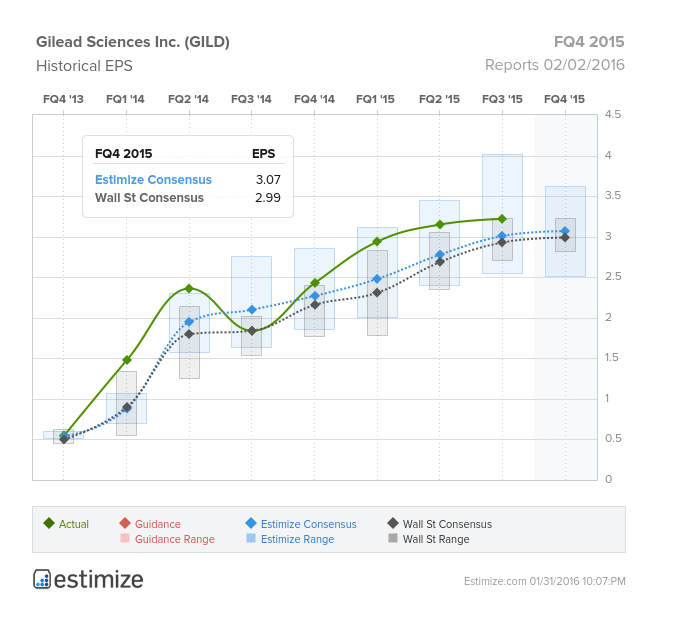 What to Watch: For the past four quarters Gilead has posted positive earnings surprises of 5.9% and is expected to beat again this Tuesday. Gilead is the market leader in Hepatitis C, with its two popular drugs, Sovaldi and Harvoni, contributing to the company’s recent success. However, both drugs have been out for over a year now, and will likely be less impactful on the bottom-line going forward, especially due to their curative nature. Compeitition is also heating up in the Hep C space, with Merck recently approved to release its rival treatment which happens to be less expensive than Harvoni. Therefore, the company is looking to expand other segments that should be profitable in the future, including their TAF-based HIV regimens set to launch this year, and treatments for Hepatitis B.

The Estimize consensus calls for EPS of $1.94, one cent above the Street’s expectation, and much higher than corporate guidance for $1.80. Revenues from Estimize and Wall Street are in-line at $1B.  If the Estimize community is correct, this would signal a decrease in earnings of 50% YoY, and a revenue drop of 6%. 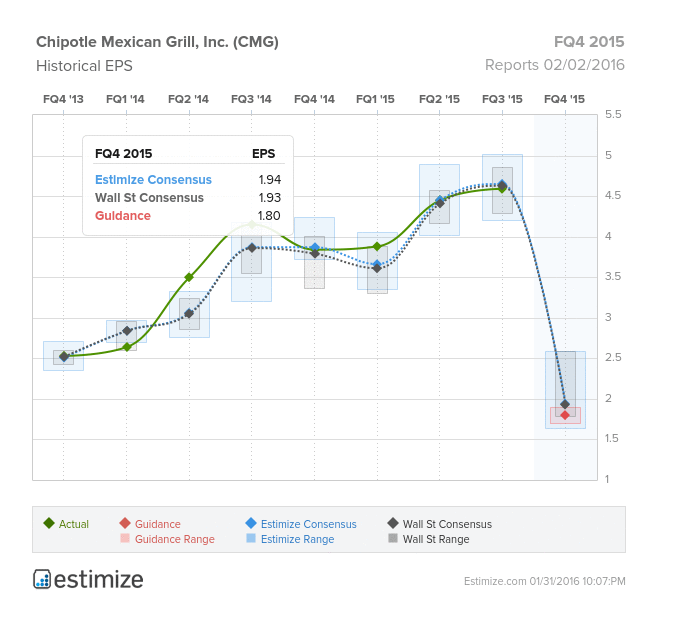 What to Watch: Once the poster child of fast casual, Chipotle is now facing a series of health issues which have deterred both consumers and shareholders. During this reporting quarter, the CDC announced it was investigating the burrito chain for another E. Coli outbreak after 5 people in the midwest got sick. On the heels of the announcement, Chipotle stock plummeted with shares reaching a 52 week low. In fact, the stock has fallen 29.3% during the course of 2015 and expectations are that the company will continue to falter. Since the emergence of the outbreak in October, sales have plunged and analysts now believe same store sales could fall for the first time in the company’s history. To deal with the food safety issue the chain has announced they will shut down all locations on February 8th for an all staff meeting. In addition to health concerns, increasing wages and a potential menu price hike have dragged down investor’s sentiment for Chipotle in 2016.

The Estimize consensus calls for EPS of $0.16 vs. Wall Street’s $0.12 and guidance of $0.40 from the last press release. Revenues have also plummeted, now expected to come in at $438M vs. $435M for both Wall Street and corporate guidance. 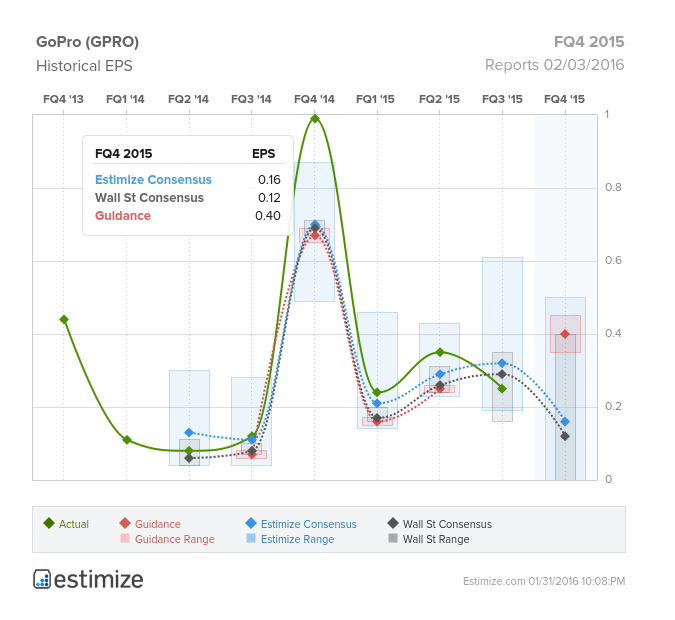 What to Watch: It probably comes as no surprise that estimates for GoPro have been plummeting ever since their last report, with EPS expectations falling 83% and revenues down 41%. The camera maker has been struggling ever since the launch of it’s HERO4 Session camera in July, sales for which have sorely missed expectations, requiring deep price cuts. GoPro still needs to prove they are more than just an action camera company, a market that has gotten very commoditized. The company’s goal since going public has been to grow into a media business, but partnerships with Facebook and YouTube have yet to make any significant impact. GoPro bulls see a couple bright spots on the horizon, however. One positive is a recent partnership with Twitter-owned Periscope, to integrate the live-streaming app into the HERO4 camera. On the product front, the highly anticipated Karma quadcopter will be released during the second half of this year, possibly offering relief.