Even with global volatility, the automotive industry is enjoying considerable gains and profitability while annual sales have reached pre-recession levels. Last year, drivers in the U.S. bought more cars than ever before, a remarkable turnaround for an industry on the verge of collapse 5 years ago. The historic free fall in oil prices have fueled car sales with consumers flocking towards gas guzzling SUV’s and trucks. The most immediate challenges that threaten the automotive sales are currency headwinds and wavering demand in emerging markets. From a manufacturing standpoint, the auto industry must evolve with major societal trend to remain relevant including a shift in consumer demand, increasing regulatory requirements and the need to integrate technology and data along the way. The outlook of the automotive industry still remains positive due to cheap gas, easy credit and an improving job market. American automakers, Ford, General Motors, Harley Davidson and Tesla all reports in the next two weeks and will set the tone for the state of the car industry.

The Estimize consensus calls for EPS of $0.48 and revenue of $35.951 billion, reflecting a significant upward trend from the year prior. Compared to Q4 2014, this represents a projected YoY increase in EPS of 86%. 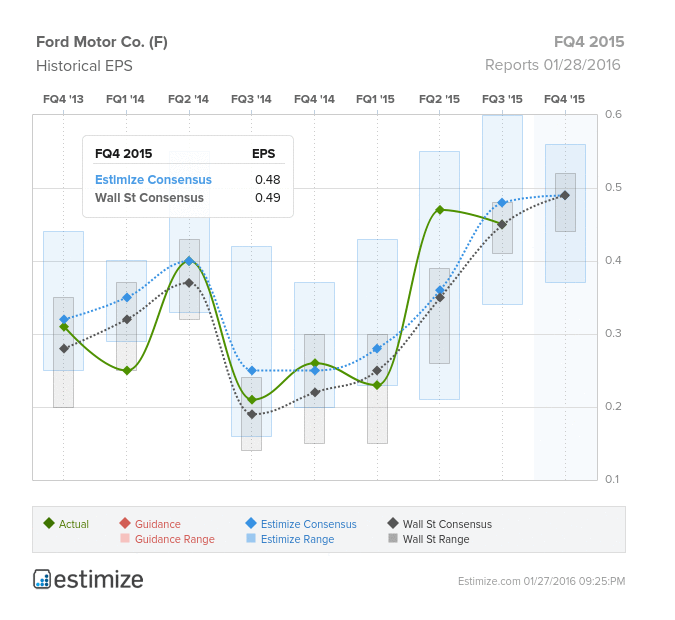 What to watch: For an industry on the verge of collapse, the automotive industry has made a remarkable industry as U.S. car sales have reached pre-recession levels. After a favorable three months, Ford Motors is poised to report strong Q4 earnings. The Blue Oval has seen frequent upward revision activity as of late, indicating an earnings beat on the horizon. Ford has outperformed expectations posting an increase in sales of almost 8% from the year prior and a 10% increase in sales of its F-Series pickups. Thanks to cheap gas, consumers are flocking to gas guzzling trucks like the Ford F150, which happens to generate the highest margins for the automaker. Besides strong truck and SUV sales, Ford has produced promising results from their new and updated models, the Ford Edge and Explorer. In the past Ford’s products did not resonate overseas, however as of late, the Blue Oval has increased its market share in Europe. That said, South America and Asia prove to be a challenge for Ford because of difficult economic woes. Ford recently pulled out of Japan and Indonesia citing wavering market dynamics. On the bright side, a majority of Ford sales come in North America where the strength of the U.S. dollar has been more beneficial than harmful.

The Estimize community expects EPS of $0.20 and revenue of $1.031 billion, slightly higher than the Wall Street consensus. Over the past two years, earnings for the motorcycle company has followed no clear trend, with large ups and downs from quarter to quarter. 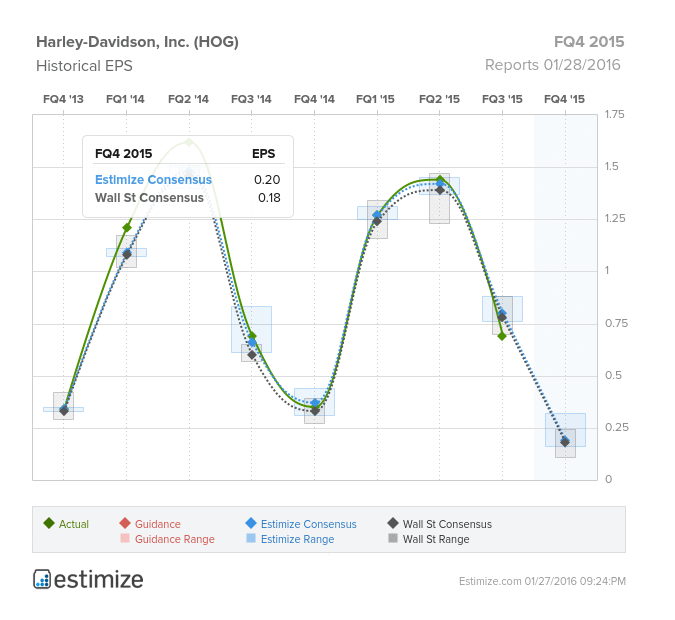 What to watch:  Last quarter, Harley Davidson delivered a negative earnings surprise of 11.5% and this quarter is expected to be no different. Shipments of the American chopper are expected to be roughly in line with orders shipped in Q4 2014. Harley Davidson has incurred an additional $30-35 million in expenses from company wide layoffs and corporate restructuring. With sales struggling, Harley has failed to adapt to the changing demographic of motorcycle owners. Today’s motorcycle buyers are a younger generation looking for low cost sport bikes rather than lavish v-twin cruisers. Harley Davidson still maintains control in the motorcycle industry with its products representing almost half of all bikes sold in the United States.

This quarter the Estimize community expects EPS of $1.26 and revenue of $38.737 billion, slightly higher than Wall Street’s estimates. With a promising outlook ahead of GM, the Estimize consensus has revised their estimates upwards, specifically increasing EPS estimates 7%. 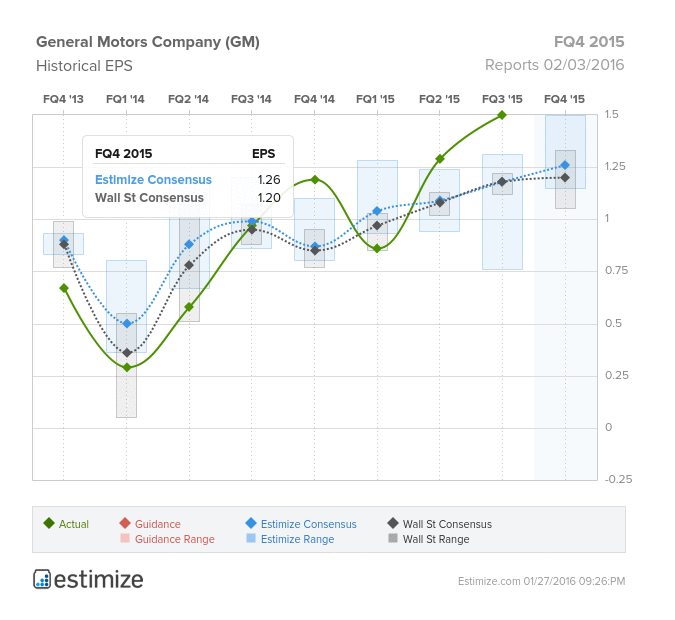 What to watch: Two years removed from a change in leadership, the financial outlook for General Motors appears to be promising. The automaker recently revised 2016 guidance, increasing its full year expectations 25 cents per share. General Motors is the largest of U.S. automakers and generates 35% of its revenue in North America. The company receives the remaining portion of revenues from global markets subject to currency risk from a strong U.S. dollar. This is a concern for GM as they must compete not only with U.S. automakers but also international car makers such as Toyota. That said, the company is positioned to benefit from its investments domestically, new product launches and partnerships. Earlier in 2016, GM invested $500 million in ridesharing company, Lyft, to develop a fleet of self-driving cars. Moreover the automaker recorded its highest year of car sales in the U.S. and views emerging markets as a huge potential. GM is taking multiple initiatives to make its vehicles more advanced while also maintain fuel efficiency and safety, insisting what should be a positive outlook for consumers and shareholders.

The Estimize consensus calls for EPS of $0.07 and revenue of $1.811 billion, surprisingly lower than Wall Street’s estimates. Compared to Q4 2014, this represents a projected YoY increase in EPS and revenue of 151% and 65%, respectively. Tesla innovatively combines the rapidly changing tech sector with a relatively lackluster automobile industry to manufacture one of the most luxurious and energy efficient vehicles on the road today. Its flagship vehicle, the Model S, crushed expectations with 3600 vehicles sold in December alone. As a whole, electric cars had a record 2015 which saw Tesla deliver over 50,000 vehicles, a 67% increase from 2014. With its booming success in North America, Tesla has begun expanding overseas in European and Asian markets. The automaker is expected to finalize 2016 guidance in the weeks to come and some bullish projections insist Tesla will deliver between 84 and 95 thousand vehicles this next year. Fueling this rapid growth will be the introduction of its newest vehicle, the Model 3. Ultimately, the outlook of Tesla hinges on its forward looking progress, as seems to be the case with anything Elon Musk embarks on.

There is still time to get your estimates in here!