Delta kicked off Q4 2015 earnings for the airlines on a sour note yesterday morning, missing expectations on both the top and bottom-line. The Estimize community had been anticipating a $25M miss on revenues, but the actual came in $100M lower than that. As expected, the airline blamed foreign currency pressures, which impacted operating revenues by $160M, and reduced passenger unit revenue by 2 percentage points. Despite efforts to hedge currency headwinds by limiting certain international routes and bulking up on domestic ones, Delta still couldn’t hit the mark.

Airline results come on the heels of an industry wide fare hike. On January 5, five major airlines including American, Delta, JetBlue, Southwest and United all announced they were raising one-way U.S. domestic flight prices by $3. The news came at an uncertain time for the industry which is currently under investigation by the US Justice Department for potentially conspiring to keep fares artificially inflated by limiting the volume of flights. 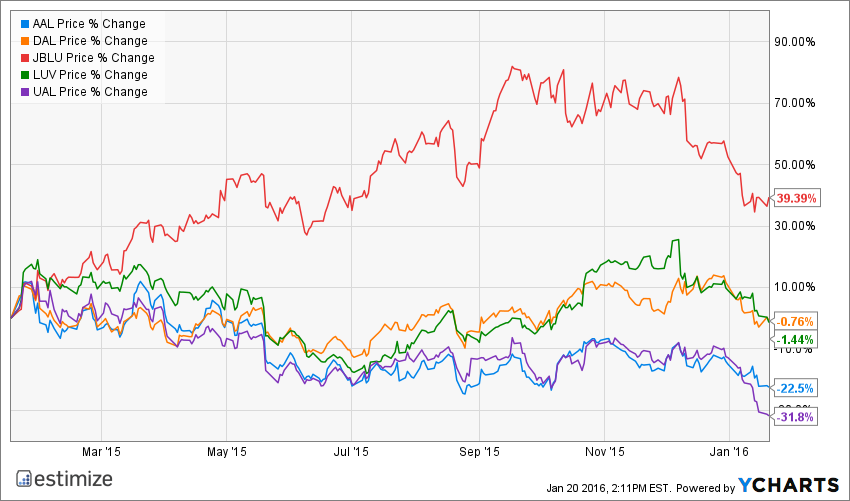 The latest price hike also comes amidst deteriorating oil prices. Airlines have been posting tremendous growth for the past several quarters in part due to fuel savings. It was initially believed that these savings would be passed onto the consumer, but instead flight prices have only increased. The S&P 500 airline industry (contains Delta, United, Southwest and American) is expected to post year-over-year earnings growth of 63% in Q4, compared to the overall S&P 500 which is anticipated to see profits decline by 2.2%. However, revenues are estimated to come in flat for the quarter, a pattern we’re continually seeing this season, strong earnings growth paired with languishing sales.

Another trend being closely monitored this earnings season is the disparity in expectations for discount airlines vs. larger carriers. Discount domestic airlines that fly to very few, if any, international destinations, do not have to contend with the stronger dollar impact.  Currency headwinds have been such a drag on multinational airlines, that several large carriers have decreased several international routes. As such, the Estimize consensus for some of these names deviates from Wall Street.

On Thursday we get results from Southwest and United Continental. The Estimize community is more bullish on Southwest, expecting EPS of $0.92, two cents higher than the Street’s consensus, and revenues of $5.05B as compared to the $4.99B estimate from the sell-side. On the other hand, Estimize is currently looking for United to miss EPS estimates by a penny.  Even with a miss, that would still denote 117% profit growth for UAL from the year-ago period, while revenues are anticipated to decline 2%.

Southwest  Get your estimates in for these names now!