In capital structure, the cost of capital  becomes an optimizing tool that helps you decide the right mix of debt and equity. 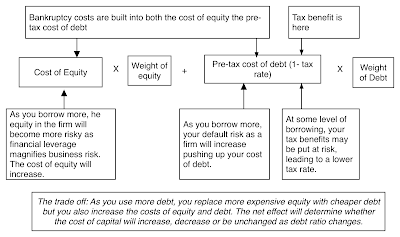 In the valuation class, the cost of capital is the discount rate that you use to bring operating cash flows back to today, to arrive at a value for a business. It has, unfortunately, also become the instrument that analysts use to bring their hopes, fears and worries into value, adding premiums to the discount rate, if an asset is illiquid, or reducing it, if it provides other benefits. 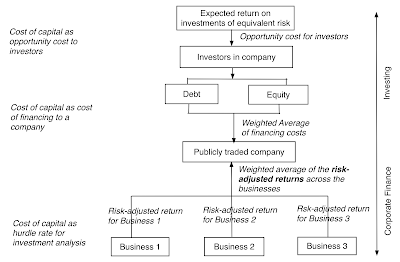 In short, it is difficult to do financial analysis without at least getting a sense of what the cost of capital is, for a business. The many uses to which it is put has also meant that it has become all things to all people, a number that is misused, misestimated and misunderstood.

The Mechanics of Estimating Cost of Capital
About a year ago, in the context of my 2015 data update, I had an extensive post on the mechanics of computing cost of capital. Rather than repeat that post, I will direct you to it and summarize the process in a picture, for estimating the cost of capital for a company in US dollars: 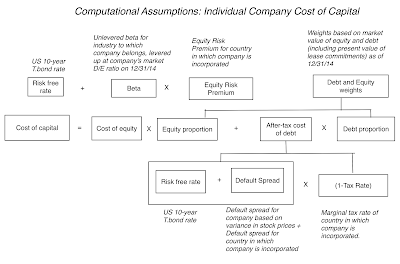 Thus, the cost of capital is a composite cost of equity and debt and incorporates the tax benefits of debt (through the after-tax cost of debt) and the risk added by debt in increased costs for both equity and debt. If you want to estimate the cost of capital in a different currency, you have two choices. The first is to replace the US dollar risk free rate with the other currency’s risk free rate (seem my earlier post on currencies) or to add the differential inflation rate between the US dollar and the currency in question to a US dollar cost of capital. Thus, if your US dollar cost of capital is 10%, the inflation rate in rubles is 9.5% and the US dollar inflation rate is 1.5%, your Russian ruble cost of capital will be approximately 18%. (It is a little more precise to compute this rate allowing for the compounding: (1.10) (1.095/1.015) -1, but I will leave it up to you to decide whether it is worth the effort.)
The Cost of Capital – US companies
Let me start off with the US-centric portion of this post, where I look at the distribution of costs of capital across my sample of 7480 firms that are listed in the United States. In making my assessments, I made some simplifying assumptions:
The resulting distribution of costs of capital across US companies is summarized below. Note that 90% of US firms have costs of capital between 5.23% and 10% and 50% of US firms have costs of capital between 6.60% and 9.20%. 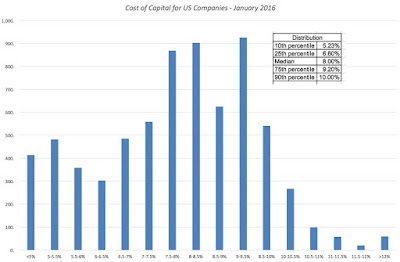 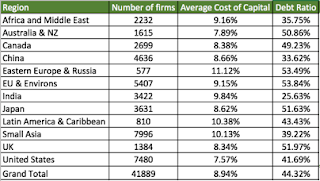 Past Blog Posts on Interest Rates and Currencies