We wake up today to the latest carnage in the GoPro stock, down another 20% on weak earning`s, poor guidance, and a 7% cut in its workforce. There are several things the company could have executed on so that the stock would have held up much better than its near Cavalry stampede from $94 a share to effectively $11 a share on a direct line down. For example, they could have followed the Apple model and come out with a much better device every nine months with new features that blow the previous model out of the water.
Poor Execution
They could have executed better on the strategy of building a brand around the media aspect of the company. They could have used their lofty stock price to buy other companies and diversify their revenue stream. As even they knew their stock was over valued at the time this is why everyone who could sell at the company was cashing in as soon as any lockout barriers were removed or circumvented in the case of the CEO with his charity fund. They could have branched out with new devices to diversify from being labeled the Camera on a stick company. But they didn`t, and it looks more and more that their heart wasn`t in it after getting their big payday in hitting the IPO jackpot. 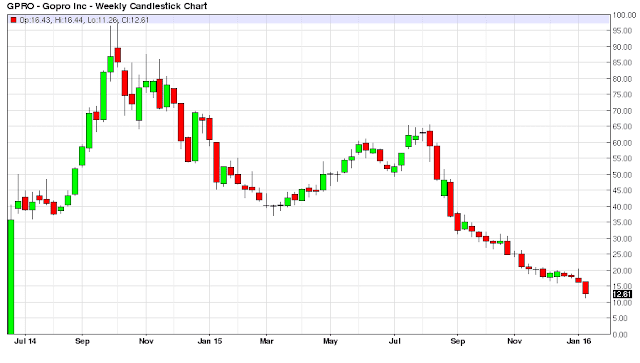 Salesman are always closing
Nick Woodman talked a good game, this guy is straight out of the salesman`s cliché catalogue. He is good looking, young and charismatic and the tech industry was at its height of popularity, with markets at all-time highs and tech valuations garnering ridiculous valuations his spiel is even more believable. But come on when a company fails to execute as much as this company failed it is obvious that leadership was on the banquet circuit more than running a company.
How hard is it not to make some ‘marketing’ engineering changes to the main product and come out with a new model every nine months? But I am not going to be too hard on GoPro because they did come out with an initial product that people liked, and you cannot really blame them for maximizing their 15 minute`s Cash In Window. Not everyone wants to grind out a company for 15 years like Steve Jobs.
IPO Lottery Ticket
But the bigger picture is to focus for investors on what IPOs are in many cases. The reason companies come to market in bull markets is to maximize their payday; that should be a warning sign for investors right there. An IPO that comes to market in a bear market is much more legitimate from the starting point. Moreover, there is a game that goes on in the market with IPOs, and I will lay it out here.
Hedge Funds
Hedge Funds love to run up IPOs, they identify a company that has a sexy product, a sexy story, something that can be sold to the market as a growth company. Then they look for a relatively small float which makes it easier to push up or manipulate. The play is this: Buy the stock in the pre-market as much as they can get their hands on, get together with a couple of other hedge funds and team up to push the stock up after the IPO comes to market, pushing the sexy story, and letting the media just hype the stock for them.
Nick Woodman with his charming smile and personality was the perfect pitchman for this scheme. Then of course as the stock continues to rise, value investors come in to short the stock on valuation concerns. This only adds fuel to the fire as these investors get blown out of the water by the hedge funds who just have more buying power and momentum on their side. This causes the stock to go higher than it would otherwise. Additional ‘smart money’ knows the stock is now over valued so they come in to short the stock, but the original shorters are still new buyers, and technical buyers come in and initiate a second, and third, and fourth short squeeze until finally everyone has given up on shorting the stock as they have all been liquidated. Never short a hot IPO, wait until everyone and their mother has been squeezed out of their short, and then wait for confirmation. The best way is to then do this in the options market, but wait for several short squeezes before buying your deep out of the money puts.
Options is where the major money is made on these plays
Then the hedge funds buy a bunch of puts on the stock and start unwinding their substantial positions and ride the stock all the way down, adding additional shorts to the market, and fueling the downside carnage. And if they can get a company that fails to execute like GoPro the more the better from a profit standpoint. Now not all IPOs are as lucrative with this scheme as GoPro has been. But on average this is a pretty standard strategy with regard to IPOs, enough so that hedge funds have formed a game plan around how best to play these IPO games; and makes fortunes manipulating them up and down in this manner. It is one of the oldest games on the street. 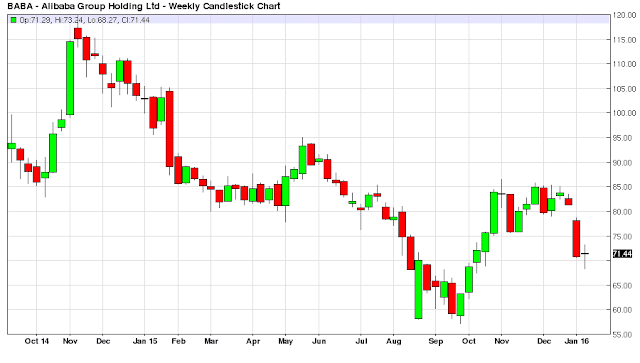 Conclusion
Therefore, stay away from most IPOs, even legitimate companies like Alibaba exhibited this same run it up after the IPO, then dump it like a rock strategy. Always wait for the pullback, like in Facebook and look for growth in quarterly earnings that are going to be the rare growth momentum 10 bagger plus models like Google, Baidu, etc. But many IPOs are scams that come to market for their lottery ticket.
You think Yahoo ever made any money off of Mark Cuban`s scam IPO market offering? That`s why many of these sales types comes to market with some flashy business model that just isn`t going to generate solid quarterly earning`s growth over the long haul. And these companies just play into the IPO scam market game of pushing the stocks up to ridiculous levels, blow out the shorts, and then take them down like an avalanche. The scheme is highly profitable, just avoid being a victim and stay away from most IPOs.