Goldman, JPM, RBS, Barclays and HSBC are Sorry they Took Your Money

That sounds like a lot of money but this fine is nothing more than a slap on the wrist for the 8 (so far) banks that are settling lawsuits for BLATANTLY MANIPULATING (allegedly) the $5.3 TRILLION foreign-exchange market.

BlackRock’s Larry Fink: Not all ETF investors are passive

BlackRock CEO Laurence Fink spoke at Morningstar's recent conference, and he talked about a variety of things, like his concerns about company culture at a time when all the firm's employees are working at home. Despite those concerns, he doesn't think BlackRock will ever be 100% working in the office. He thinks employees will always Read More

Sorry, that’s $5,300,000,000,000 PER DAY of trading in FOREX, which means that manipulation of just 0.05% in a single day would have made $2.65Bn for the Banksters in question. Does that put the $2Bn fine into perspective? Do you think that’s going to discourage them or perhaps encourage others to manipulate the markets, knowing that the fines – IF they get caught – barely amount to half a day’s work while they are getting away with it. Not only that, but this lawsuit has been dragging on since 2013.

Meanwhile, China is rigging the currency markets on a daily basis (oh, and you must see this video of yesterday’s port explosion!) and so is our own Fed and the Bank of Japan and the ECB and the Bank of England and every other Central Bank on the planet. This is how the game is played people – no sense complaining about it – especially not when we can use it to our advantage!

As you can see from this chart, China’s CSI Futures are now trading in greater volume than the S&P or Euro Stoxx, even though their market capitalization is just 1/3 of the Nikkei – that’s an active market! No wonder our Banksters friends want to take their cuts when they can – just a nickel per transaction is over $1Bn, that’s good business. Despite all the games being played to prop up the markets in China, sentiment is clearly turning lower still.

We talked about the contagion spreading from China to other Asian countries but it’s moving faster than that and already the Q2 GDP Reports coming out of Europe are alaming, with France missing huge at 0% growth and Spain the only major to hit expectations – although it’s a very anemic 1%. You know you are in trouble when Greece is your best performer!

Don’t forget, Q2 ended in June and the Shanghai only began falling around June 15th and was “only” down 18% on June 30th. It’s July and, so far, August where the real shock waves of China’s rapid economic slowdown have been felt around the World. When I was a kid, I was taught that the markets were a forward-looking pricing mechanism but all this manipulation has completely broken that function and now the markets even ignore warnings signs that are flashing right in it’s face. That’s very dangerous, as it leads to large misallocations of capital.

Why should you care? Because it’s your investment capital that is being misallocated, that’s why! Whether you are investing in stocks or bonds or keeping your money in a mattress, someone is still messing with it and wrecking havoc with proper valuations.

Forcing rates to be low leads companies to borrow too much (and unfairly penalizes you for saving) and more prudent companies are penalized by the markets for not being aggressive enough. Money flows into the daredevil stocks but then rates rise and they can’t pay their loans (see commodity sector) and everything falls apart very quickly.

Of course our Central Banksters are not done manipulating the economy yet, so it’s very hard to predict when, exactly, this whole ball of wax will begin to melt down. What we do know is that Gallup just polled Americans and asked them “In general, are you satisfied or dissatisfied with the way things are going in the United States at this time?” and only 26% answered yes to that question. As I keep saying, only people in the top 20% of this country (and really the top 10%) are in good shape economically, for the rest – well, dissatisfied seems to be the word… 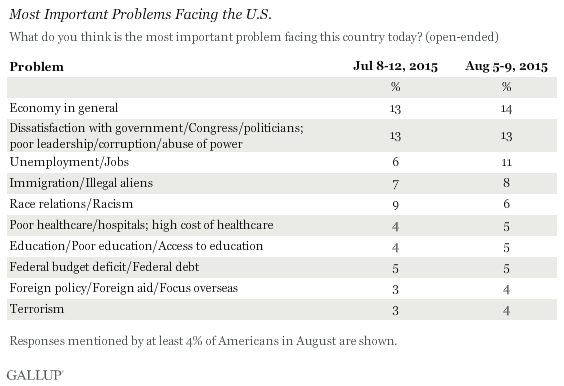 70% of the US GDP is Consumer Spending. As income disparity increases (now at record levels – worse than 1929) we end up relying more and more on the whims of the top 1%-10% to drive the economy. That means, if they stop buying gold, gold collapses. If they don’t by iWatches or Teslas or GoPro cameras, it’s a disaster. Companies are hardly even bothering making products that appeal to the bottom 80%, because they have no disposable income and are unable to make new purchase decisions, even if they want to.

It’s hard to, logically, be bullish about the US markets when the Asian markets are falling and now Europe’s GDP is missing the mark and the US consumer is on the ropes. If you haven’t already, it’s a good time to consider some defensive plays – including having a good amount of CASH!!! on the sidelines – just in case things do hit the fan.

Have a great weekend,