See, the timing of buybacks at an aggregate level has nothing to do with value. As Albert Edwards at SocGen has often observed, not only do buybacks increase at rich market valuations and dry up in depressed markets, they are also typically financed by issuing debt. What drives buyback activity is not value, but the availability of cheap, speculative capital at points in the business cycle where profit margins are temporarily elevated and make the increased debt burden seem easy to handle. The chart below showed the developing situation a few years ago… 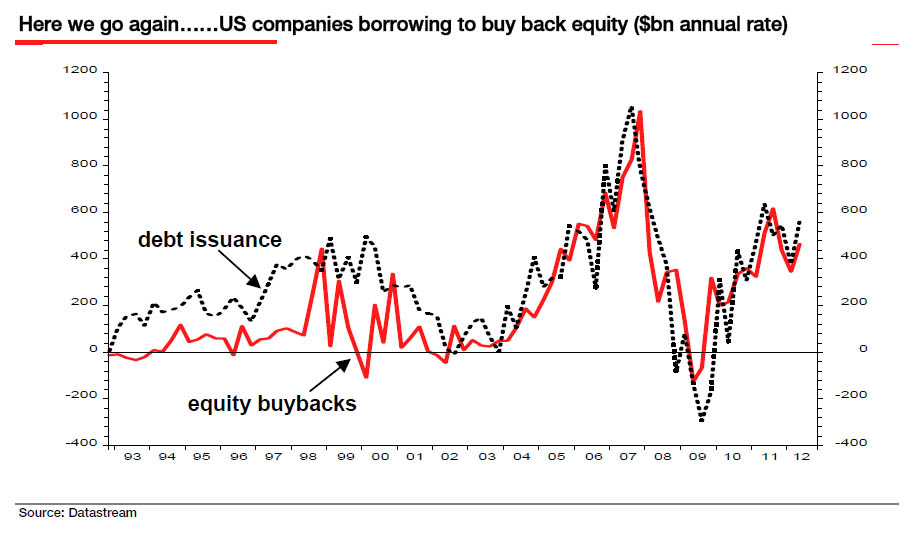 … and the chart below shows the frantic pace that repurchases have reached – at what are now the most extreme levels of valuation in U.S. history outside of a few months surrounding the 2000 market peak. 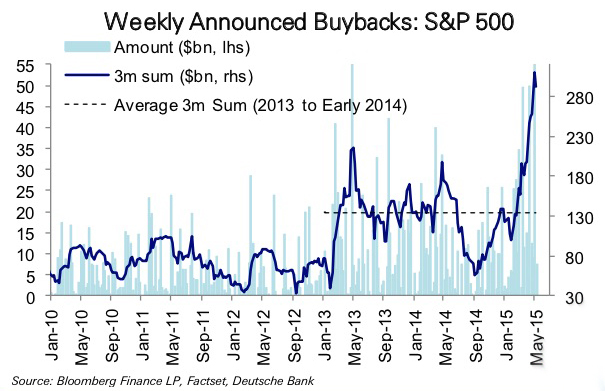 One emerging problem here is that credit spreads in corporate debt have begun to widen considerably, increasing the cost of debt, while profit margins continue (predictably) to come under pressure. Corporations tend to press their luck when it comes to buybacks, largely because profit margins tend to be deceptively high at major market peaks, but it’s difficult to maintain a high pace of repurchases when fading revenue growth and narrowing profit margins are joined by wider credit spreads.

The larger problem with repurchases is that debt-financed buybacks effectively put investors on margin. As corporations have borrowed in order to aggressively buy back their stock near the highest market valuations in history, existing stockholders have quietly become heavily leveraged, without even realizing it.

The first exhibit of analysts who claim that corporations are not highly leveraged is to compare the amount of debt owed by companies to the market value of corporate equities. But this is a deceptive metric because equities themselves are so extremely overpriced. Similarly, comparing the enterprise value of the company (the combined value of its stock and bond obligations) to earnings before interest, taxes, depreciation, and amortization (EBITDA) is also misleading because profit margins, despite some initial erosion, are still near record highs.

We’ve emphasized that the most reliable valuation metrics we identify are based not on earnings but on measures such as revenue, GDP and corporate gross value added, all of which essentially suppress the cyclical impact of profit margin fluctuations. Among these, the single most reliable variant is Market Cap/GVA, which has a correlation of roughly 92% with actual subsequent S&P 500 10-year total returns. Over the long term, it is gross value added that provides the fundamental basis for cash flows that will be delivered to stockholders and bondholders over time. Comparing both equity market capitalization and corporate debt obligations to GVA offers a reasonable indication as to how leveraged corporate securities have become, relative to the top-line driver that is ultimately responsible for providing long-term returns to investors. 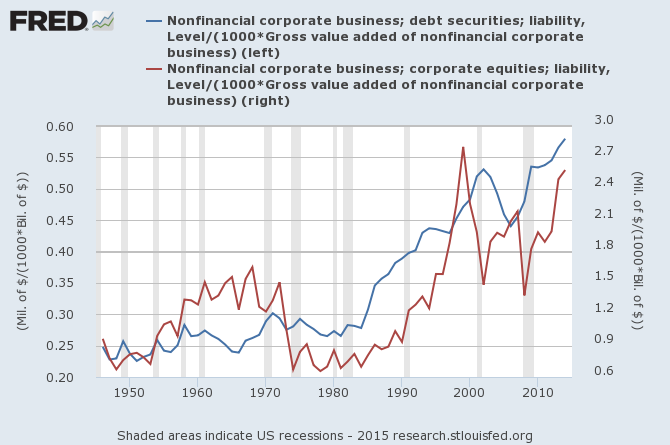