The financial markets are establishing an extreme that we expect investors will remember for the remainder of history, joining other memorable peers that include 1906, 1929, 1937, 1966, 1972, 2000 and 2007. The failure to recognize this moment as historic is largely because investors have been urged to believe things that aren’t true, have never been true, and can be demonstrated to be untrue across a century of history. The broad market has been in an extended distribution process for nearly a year (during which the NYSE Composite has gone nowhere) yet every marginal high or brief market burst seems infinitely important from a short-sighted perspective. Like other major peaks throughout history, we expect that these minor details will be forgotten within the sheer scope of what follows. And like other historical extremes, the beliefs that enable them are widely embraced as common knowledge, though there is always, always, some wrinkle that makes “this time” seem different. That is why history only rhymes. But in its broad refrain, this time is not different.

The central fallacy operating here is the notion that monetary easing provides a kind of mechanical and concrete support to the financial markets, when in fact the primary driver of financial markets in recent years has been pure speculative risk-seeking. While risk-seeking is encouraged by monetary easing, it is not a reliable outcome. Once speculative valuation extremes have been in place, persistent monetary easing has certainly not prevented severe market losses in prior cycles. Investor preferences toward risk distinguish the expanding phase of a bubble from its inevitable crash, and these are most directly measured through the behavior of market internals, not through the behavior of monetary authorities.

More enlightened leaders at the Federal Reserve would never have allowed, much less intentionally encouraged, yet the third speculative episode in 15 years. Unfortunately, the idea that repeated cycles of malinvestment and yield-seeking speculation have actually been thecause of the nation’s economic malaise doesn’t seem to cross their minds. They appear more interested in dogma than in data. The dogma is that there is a Phillips Curve between employment and inflation that can be manipulated provided a sufficiently massive distortion of the monetary base and the level of short-term interest rates. The data is that there is a feeble correlation between the Fed’s policy tools and the objects they wish to control. One wonders whether the FOMC has even made the effort to operate a scatterplot to visualize these undependable relationships, or to actually estimate effect sizesto discover how limited their ability is to manipulate the real economy. The strongest line of cause and effect they will discover is their ability to produce repeated financial crises through reckless monetary distortions.

Enlightened members of the FOMC should even question the theoretical basis for their actions. The Phillips Curve is actually a scarcity relationship between unemployment and real wage inflation – basically, labor scarcity raises wages relative to the price of other goods (see Will The Real Phillips Curve Please Stand Up and the instructive chart from former Fed governor Richard Fisher in Eating our Seed Corn). That’s the only variant of the Phillips Curve that actually holds up in the data, and there is no evidence that this or other variants can be reliably manipulated through monetary changes.

Moreover, consumers spend based on their concept of “permanent income,” not off the value of volatile assets such as stocks. Economists have understood this since the 1950’s. While the Fed has been successful at intentionally promoting yield-seeking speculation since 2009, a century of evidence demonstrates that current valuation extremes also imply a market collapse that is now baked in the cake, and that Federal Reserve policy has much less ability to prevent than investors seem to believe.

The one lesson to learn before a crash

Let’s get my subjective narrative out of the way so we can focus on the objective evidence. My own stumble in the half-cycle since 2009 – and it was a serious one – was to insist, after a financial collapse that we had anticipated, on stress-testing our methods of classifying market return/risk profiles against Depression-era data. During the tech bubble, we recognized that deterioration in market internals and other risk-sensitive measures such as credit spreads is the central feature that distinguishes an overvalued market that continues to advance from an overvalued market that collapses. The broad behavior of market internals (what I used to call “trend uniformity”) is effectively a measure of investor risk-preferences, and increasing divergence and dispersion is a signal of emerging risk-aversion among investors.

The problem with our stress-testing effort was that the resulting methods picked up another regularity: in prior market cycles across history, the emergence of an extreme syndrome of overvalued, overbought, overbullish conditions had generally been accompanied or closely followed by a breakdown in market internals. As a result, we responded defensively immediately when those syndromes emerged. As it happened, if quantitative easing did anything to make the period since 2009 “different,” it was to disrupt that regularity. Quantitative easing repeatedly and intentionally encouraged yield-seeking speculation by investors, despite overvalued, overbought, overbullish extremes. Since 2009, it has only been when market internals have explicitly deteriorated (for example, in 2011), that the stock market has declined meaningfully. In mid-2014, we imposed the requirement that a hard-defensive investment outlook must be coupled with actual breakdown in market internals or credit spreads as a prerequisite. See A Better Lesson than “This Time is Different” for a more complete narrative.

The following clipping, from my October 2000 commentary, details the lesson that I unfortunately had to learn twice in my career. I strongly encourage investors to learn it at least once – here and now – because market internals and credit spreads have clearly deteriorated, and I view the risk of a market collapse as increasingly palpable. 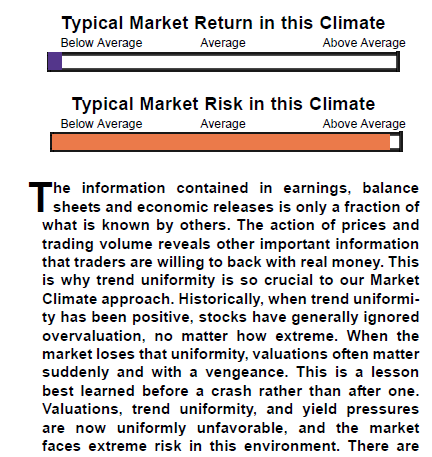 Again, it’s not simply extreme valuation, but the fact that extreme valuation is now joined with deteriorating market internals and widening credit spreads, that drives my rather unrestrained concerns here. Despite wicked valuations, an improvement in market internals and credit spreads would convey a signal about fresh risk-seeking among investors and would substantially ease the immediacy of those concerns.

As a reminder of where valuations stand, the following chart presents the ratio of market capitalization to non-financial gross value added, including estimated foreign revenue. MarketCap/GVA has a correlation of 92% with actual subsequent S&P 500 total returns over the following decade, a reliability that exceeds that of every other valuation ratio we’ve examined across history, including price/forward earnings, the Fed Model, the Shiller P/E, Tobin’s Q, market cap/GDP, dividend yields, price/book, and even price/revenue. 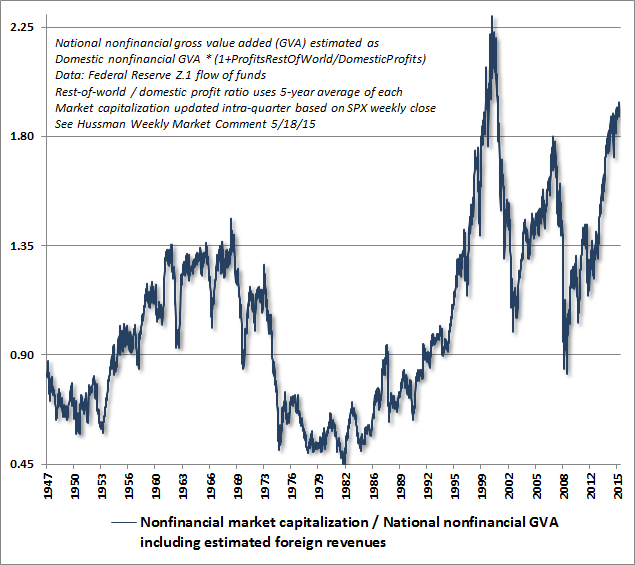 The following scatterplot, based on the same data since 1947, shows the relationship between MarketCap/GVA and actual subsequent annual total returns in the S&P 500 over the following decade. Present valuations are consistent with the expectation of zero return from equities over the coming 10-year period. 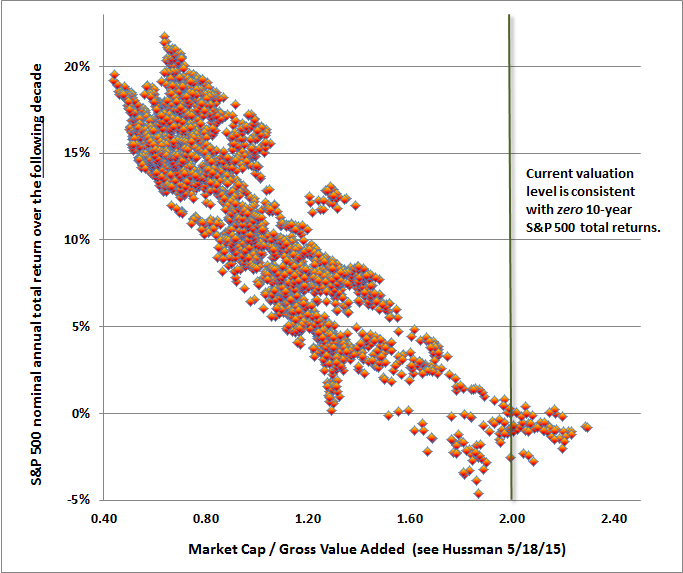