ValueWalk
Home Top Stories No Light at the end of the Tunnel: Investing in Bad Businesses

What is a bad business?

If Mr. Marchionne’s point is that the automobile business is a bad one, it is worth starting this discussion with the question of what it is that make a business a bad one. At an extremely simplistic level, you can argue that a bad business is one where many or most companies lose money, but that definition would encompass young sectors (social media, biotechnology) that tend to lose money early in the life cycle. It also would imply that any sector that collectively makes profits is a good one, which would not make sense, if the sector has huge amounts of capital invested in it. Thus, any good definition of business quality has to look at not only how much money a company makes but how much it needs to make, given its risk and the capital invested in that business. In corporate finance, we try, to capture this by looking at both sides of the equation:

While there are some business (banks, investment banks and other financial service companies), where the equity comparison is more useful, in most businesses, it is the comparison on a overall capital basis that carries more weight. If you accept the proposition that the return on invested capital measures the quality of a company’s investment and the cost of capital is the hurdle rate that you need to earn, given its risk, the spread between the two becomes a snapshot of the capacity of the company to generate value.
Why a snapshot? If the return on invested capital is estimated, as it usually is, using the operating income that the company generated in the most recent time period and the cost of capital reflects the expected return, given the risk free rate and equity risk premium in that period, it is also possible that looking at a single period can give you a misleading sense of whether the company in question is generating value. With cyclical and commodity companies, in particular, where earnings tend to move through cycles, a good case can be made that we should be looking at earnings over a cycle and not just the most recent year. Finally, the return on invested capital is an accounting number and is hence handicapped by all the limitations of accounting principles & rules, a point I made in this long, torturous examination of accounting returns. If you bring the two strands of discussion together, there are two levels at which a sector has to fail to be called a “bad” business.
In my post on GM, I made the case that the automobile business was a bad one, using these two metrics. Collectively, the distribution of returns on capital across global automobile companies in 2014 looked as follows:

If you look at the return on capital across time for the auto industry, you see the same phenomenon play out. 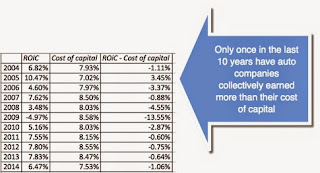 Up 60% In 2020, Axon Capital Says These Tech Stocks Are Value Stocks

It should come as no surprise that I agree with Mr. Marchionne that the auto business is a bad one and with Mr. Warburger that the companies in this business are in denial. The bad news for investors is that the auto business is not alone in this hall of shame. I computed returns on capital, costs of capital and excess returns for all non-financial US companies, by year from 2005 to 2014, and then looked for the sectors that delivered a negative excess return on average during the decade, while also generating in excess returns in at least 5 of the 10 years:
Some of the businesses on this list have a good reason for being on the list and perhaps can be cut some slack. For instance, the green and renewable energy business has delivered negative excess returns both in the aggregate and in every year for the last decade, but in its defense, it may be a business that needs time to mature. The real estate sector is well represented on this list, with REITs, homebuilding, building materials and real estate operations & development all making the list with negative excess returns. An optimist may argue that the last decade created the perfect storm for real estate, unlikely to be repeated in the near future, and that these businesses will return to adding value in the future. There are some surprises, with entertainment software, wireless telecom and broadcasting all making the list, suggesting that you can have bad businesses that are growing. Finally, there were 169 companies that were classified as diversified, and their excess returns were negative every year for the entire decade, making a strong argument that many of these companies would be better off broken up into constituent parts. It is true that the returns on capital in this table were computed using standard accounting measures of operating income and debt, and I recomputed them, with leases capitalized as debt to derive the following table:

The list looks almost identical to the unadjusted excess return rankings, though the excess returns for restaurants, retailers and other larger lessees became much smaller with the adjustment and airlines make the worst business list, once you consider leases as debt.

Why do companies stay in bad businesses?

If you are a company that finds itself in a bad business, there are four options to consider. The first is to exit the business, extracting as much of your capital you can to invest in other businesses or return to the suppliers of capital. While this may seem like the most logical choice (at least from a capital allocation standpoint), there is a catch. It is unlikely that you will be able to get your original capital back on exit, because buyers will have reassessed the value of your assets, based on their diminished earnings power. Consider, for instance, a company that generates a 3% return on capital on invested capital of $1 billion and assume that its cost of capital is 6%. If a sale of the assets or business will deliver less than $500 million, the best option for the company is to continue to operate in the bad business. The second is to retrench or shrink the business, by not reinvesting back into the business and returning cash from operations back to stockholders (as dividends or buybacks). That was the rationale that I used in supporting the GM buyback. The third is to continue to run the business the way you used to when the business was a good one, hoping (and praying) that things turn around. That seems to be the response of most in the auto business and explains the cold shoulder that they gave to Mr. Marchionne’s prescription (of consolidation). The last is to aggressively attack a bad business, with the intent of changing its characteristics, to make it a good one. This is a strategy, with the potential for high returns if you do succeed, but with low odds of success. Not surprisingly, it is the strategy that appeals the most to CEOs who want to burnish their reputations and it one reason that I posited that my returns on my Yahoo! investment would be inversely proportional to Marissa Mayer’s ambitions.
Of the four strategies, the one that is least defensible is to the third one (doing nothing), but that seems to be most common strategy adopted by companies in bad businesses and I can think of four reasons why it continues to dominate. The first is inertia, where managers are unwilling or unable to change their learned behavior, with the resistance become greater, if they have long tenure in the business. The second is poor corporate governance, where those who run firms view shareholders as just another stakeholder group and view costs of capital as abstractions rather than as opportunity costs. The third are institutional factors which can conspire to preserve the status quo, because there are benefits derived by others (labor unions, governments) from that status quo. The final factor is behavioral, where the easiest path for managers, when faced with fundamental changes in their businesses, is to do nothing and hope that the problem resolves itself.

Why do investors invest in these companies?

If it is difficult to explain why companies choose to stay and sometimes grow in bad businesses, it is far easier to explain why investors may invest in these companies. At the right price, any company, no matter how bad its business, is a good investment, just as at the wrong price, any company, no matter how good its business, is a bad investment. To decide whether to invest in a company in a bad business, investors have to value these companies and there are challenges. The first is that with these companies, growth is almost always more likely to destroy value than to increase it. Consequently, the value of these companies is maximized as they minimize reinvestment, shrink their businesses and liquidate themselves over time. The second problem is that while designing a valuation model that allows for a shrinking company is easy enough to do, the value that you get is operational only if management in the company does not undercut you, by aggressively seeking out growth with expensive reinvestment. I present responses to these problems in this paper.
As a passive investor, you have to accept your powerlessness over management and build, into your expectations, what you believe that the management will do in terms of investment, financing and dividend policy, no matter how irrational or value destroying those actions may be. As an activist investor, though, you may be able to force managers to reassess the way they run the company. It should come as no surprise that the classic targets of activist investors tend to be companies in bad business that are run by managers in denial. Finally, while the debate about corporate governance has atrophied into one about director independence, corporate governance scores and CEO pay, the real costs of poor corporate governance are felt most intensely in companies that operate in bad businesses, where without the threat of shareholder activism, managers often behave in irrational, value-destructive ways.

As I look at the excess returns generated by companies in different sectors, I am struck by how little margin for error there seem to in many businesses, with excess returns hovering around zero. If we attach large values to the disruptors of existing businesses, consistency requires us to reassess the values of the disrupted companies. Thus, if we are bidding up the values of Tesla, Uber and Google (driverless cars) because they might disrupt the automotive business, does it not stand to reason that we should be bidding down (at least collectively) the values of Volkswagen, Ford and Toyota? More generally, we seem to be more willing to anoint the winners from disruption than we are in identifying and repricing the losers.
Datasets
Papers