What Surprised Us In 2014 and Potential Risks for 2015 by Luciano Siracusano III, Chief Investment Strategist, Jeremy Schwartz, Director of Research and Rick Harper, Head of Fixed Income & Currency, The WisdomTree Blog

WisdomTree’s Chief Investment Strategist, Luciano Siracusano (L.S.), its Director of Research, Jeremy Schwartz (J.S.), and its Head of Fixed Income and Currency, Rick Harper (R.H.), sat down in mid-December to reflect on 2014 and discuss the forces that could impact global financial markets in 2015.

Below, we highlight the biggest surprises of 2014 and potential risks to look out for in 2015. To read the full roundtable discussion, please click here. 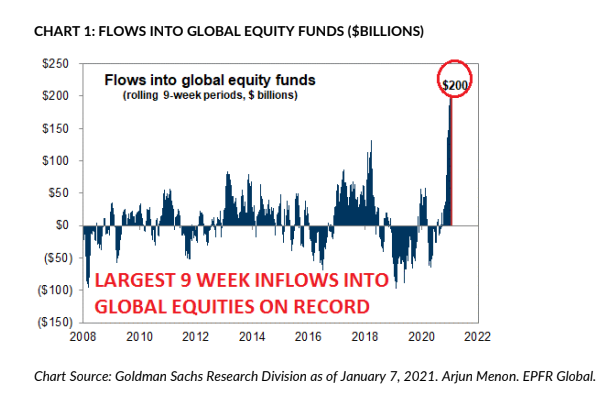 The North Rock Fund was up 7% for December, bringing its full-year performance to about 22.3% for 2020. Kelly Perkins of North Rock said that was a record return for the fund, especially the last two months of the year. Q4 2020 hedge fund letters, conferences and more He also reported that the fund's Sharpe Read More

J.S.: The biggest surprise of 2014 was how quickly oil prices collapsed—and the winners and losers this created across the various equity markets. Russia, being a major oil exporter, had the biggest negative performance, largely exacerbated by its currency sell-off; importers of oil like India, Japan, even the United States benefited.

L.S.: I agree with Jeremy on oil. The other thing that surprised me was that we did not get what so many were expecting at the beginning of the year—a correction of 10% or more in the U.S. stock market. We saw the sixth consecutive year of positive equity returns in the U.S., and we’ve seen stocks compound at 16% per year for six years in the U.S. I think the power and longevity of this bull market in stocks has surprised many investors.

R.H.: The sharp drop in oil prices and the slide in global interest rates stand out as the largest surprises over this past year. Both emerged as economic growth momentum faltered and disinflationary forces intensified outside the U.S.

Q: What are some of the big risks that could impact markets in 2015?

L.S.: There is always the risk that an exogenous event from overseas affects the sentiments of U.S. consumers, and all of a sudden psychology changes in the U.S.: People stop shopping at the malls, stop going out to dinner or to see a movie because of a foreign threat. I think we got some good news here in December with the passage of this $1.1 trillion spending bill during the lame-duck session, which removes the risk of a government shutdown for about 10 months. It basically keeps the government running through September 30 of 2015—and delays any real debate about how much of the Obama agenda the new Republican Congress chooses to actually fund. That debate likely won’t begin in earnest until the fourth quarter of next year. If the parties come together and get some type of agreement on corporate tax reform, including repatriation of overseas profits at a lower tax rate, that could actually be an unexpected policy catalyst for further upside to the market.

R.H.: As with any year, the list is potentially long. A return of the polar vortex, an escalation of geopolitical risk or a central bank policy mistake are obvious risks that could infuse volatility into the markets.

Another important consideration for investors is that extraordinary central bank stimulus and regulatory changes post-financial crisis have altered the dynamics of many markets. With volatility remaining very low and valuations in many markets relatively full, these new dynamics are largely untested. Spikes in volatility could trigger knock-on effects currently not anticipated by the market, such as those seen by the decline in energy prices. We think this reinforces the need to know what you hold, enhance risk oversight and increase threshold targets for assuming new risk positions.

The outlier risk is that an intensification of global disinflationary forces incites deeper concerns of the sustainability of U.S. growth. The Federal Reserve delays its exit from zero-interest-rate policy, and investors push expectations for inflation even lower. In this environment, investors would want to opportunistically add interest rate risk in long-term Treasuries to their core credit positions. Additionally, as we have seen in recent weeks, the impact of lower global energy prices can potentially impact markets in unforeseen ways.

Important Risks Related to this Article

Foreign investing involves special risks, such as risk of loss from currency fluctuation or political or economic uncertainty.