The number of companies in the S&P 500 commenting about oil during earnings conferences increased 37% between September 1 and November 6, 2014  compared in the same period last year, according to FactSet.

The financial research firm found that the term oil was mentioned once in 144 out of 438 earnings conferences. During the same period last year, 105 out of 426 companies commented about oil.

Fact Set found that 39 energy companies and 33 industrial companies mentioned oil in their earnings calls—the highest among the sectors. The materials sector recorded that largest increased in the number of companies citing oil during conferences.

Last week, Pioneer Natural Resources (NYSE:PXD) commented that the $30 decline in the price of oil per barrel is equivalent to $1 trillion stimulus per year to the global economy.

On the other hand, Denbury Resources Inc. (NYSE:DNR) commented, “ As everyone knows, oil prices dropped considerably over the last couple of months and WTI future prices are now below $80 both short and long term. Of course finally, the equity valuations of oil companies have dropped significantly including ours.” 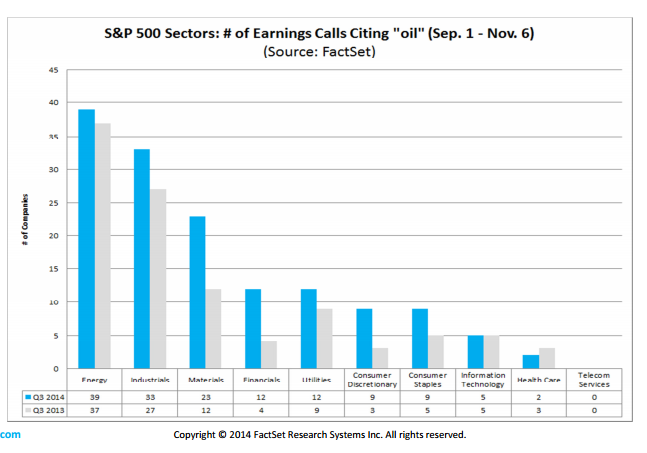 Fact Set observed that only a few companies has reaction regarding the results of the mid-term elections when the Republican Party gained control of the Congress. The financial research firm found that only 22 companies in the S&P 500 cited the term election during earnings conferences between September 1 and November 3.

Election was mentioned by 10 companies in earnings calls on November 4 to 6. Only three companies commented specifically about the congressional elections.

Based on the results of the mid-term election, some analysts speculated that there would be changes in policies including the Dodd-Frank Wall Street Reform and Consumer Protection Act and Affordable Care Act (ACA).

Tenet Healthcare Corp (NYSE:THC) commented, “But on the topics you raised about politics, there are probably all sorts of fear factors. I think the reality is with respect to the Republican control of the Senate, the ACA marketplaces and benefits are so deeply established across so much of the country now, it’s really hard to imagine taking that on as a fight and trying to dismantle it. Tweaking it, fine, we could expect that.”