ValueWalk
Home Business Majority Positive on Retirement; While Those Older Less Sure

A new Gallup Poll shows that those who have not retired yet think that they will have plenty of money to live comfortably in their retirement.  This comes as funding for public pension funds and concern regarding a statistical bubble in government known obligations for retirement benefits is set to occur within five years.

Prior to 2008, when a market crash caused by financial structure led to questioning of retirement plans, a majority of non-retired Americans consistently thought they would be able to live comfortably in retirement. This number fell to 46% in the aftermath of 2008, staying below the 50% mark until this year. 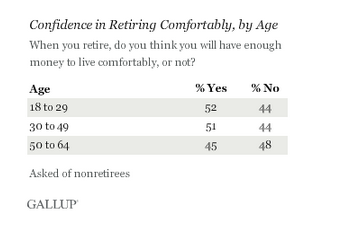 For the first time since the 2008 structural crash, non-retirees are slightly more likely to think they will have enough money to live comfortably after retirement than think they will not have enough. Retirement worries are greatest among Americans aged 50 and older who are approaching retirement age and least among younger Americans.

This uptick in confidence in having enough money to retire comfortably may be related to the recent rises in the stock market, a report on the topic notes.  Most respondents likely have no idea regarding how asset prices have been inflated through quantitative easing.  “While 401(k) accounts, which most nonretired Americans plan to rely on for income when they retire, dropped in value during the financial crisis, many are regaining their value, which could be easing Americans’ fears about having a comfortable retirement,” the report said.