The other day, I told you about my mistake of being an arm chair investor.

That is, just sitting at my desk, reading filings and believing I understood the business.

But today, I’m going to look at the flipside.

When it’s actually ok to be an arm chair investor.

You Have Absolutely ZERO Edge with Blue Chips Stocks

CONN’s Inc was a story about a small-mid cap company where you need to put in the extra work.

These are the stocks where you can get One Up On Wall Street.

But for blue chips, it’s never under followed and rarely misunderstood.

The minute something happens, you will be one of the last to know.

If you have special insight, that’s called insider trading.

Otherwise, it’s already been analyzed, scrutinized and argued to death.

That’s why when I invest in a company like Apple (AAPL) or Microsoft (MSFT), I don’t bother trying to predict what the next iPhone screen size is going to be or how well it will do in China. This is one of the times where it’s ok to be an arm chair investor. It’s better than spending days or weeks trying to find information that is totally useless in the end.

An article came out today on Seekingalpha talking about Apple’s role with new future 4K resolution screens. I have no idea how this has anything to do with Apple itself.Samsung has one out already for $40k. ASUS, LG, Sony and other manufacturers have their own too.

Just like that referenced article, everything has already been written to death so much that useless noise is spread with large caps.

Ultimately, with blue chips, the only two avenues you can focus on is finding companies with

Take a look at BP. 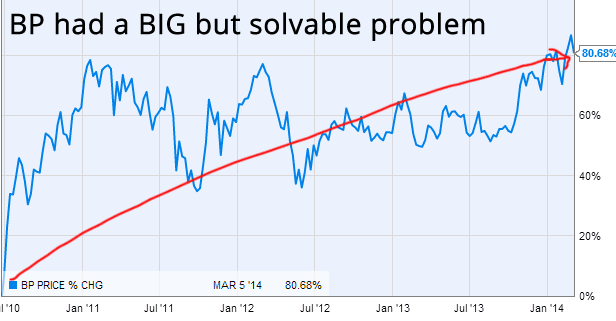 If you had iron guts, and managed to tune out the noise, this turned out to be a great investment. 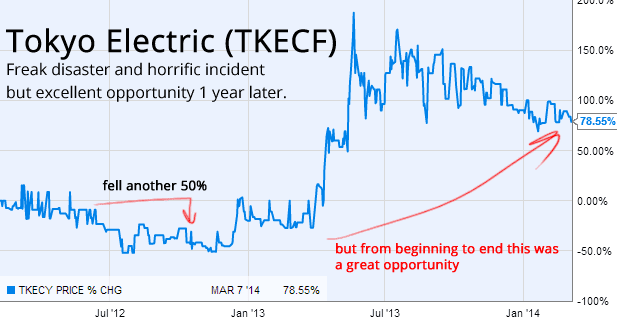 In the article, he made two big points that are spot on

Back to Big Solvable Issues and Cheapness

Both 1 and 2 end up pointing to valuation. Your only edge with large cap stocks is the price you pay. 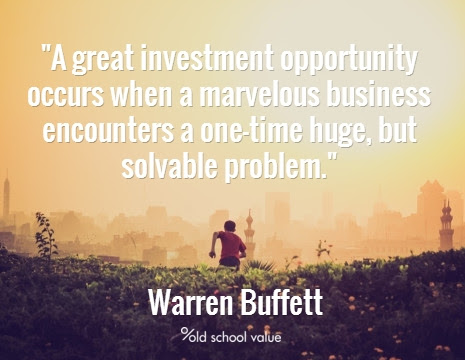 A great investment opportunity occurs when a marvelous business encounters a one-time huge, but solvable problem

The biggest stock I own is Apple and when I wrote about Apple over a year ago, I just focused on the fundamentals and valuation.

My stance was that Apple was NOT worth the $460 it was trading at.

It was worth more.

Today, it’s priced at $530 which is a slight improvement but my stance now is that Apple is still not worth $530. It’s worth more.

Apple may not have the one-time huge solvable problem to take advantage of, but it does fit the second characteristic.

I’ll be doing a one year follow up on AAPL in the coming days so that you can see more of the details behind the valuation numbers below.

For now, here’s a quick look at the numbers.

I’m doing this quickly with the OSV Analyzer so the values may change slightly in the actual follow up in a few days. If you have the analyzer in front of you, try to figure out how I’m getting my numbers and tell me what your assumptions are. Should be a good quick valuation exercise.

First some basic valuation ratios. I hope you can read my writing. 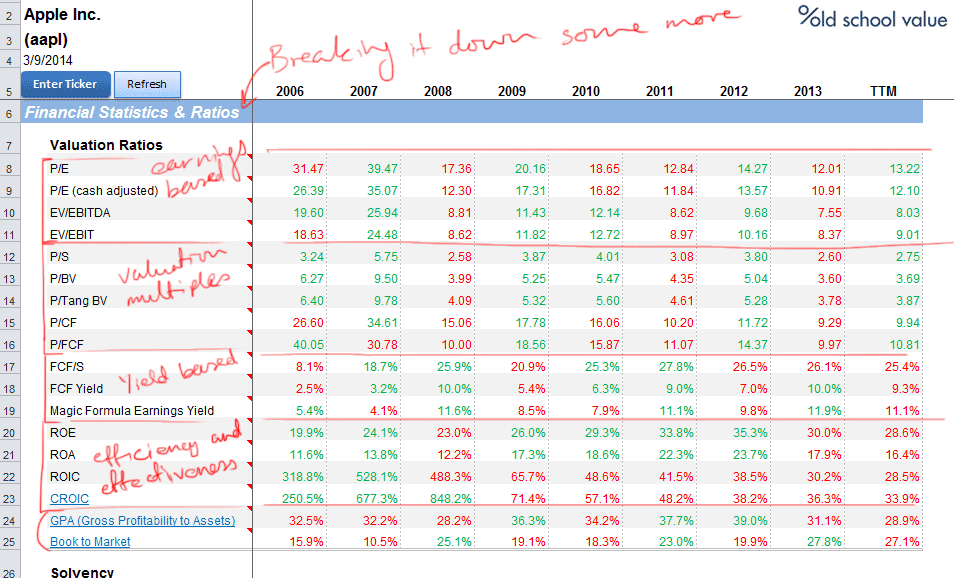 When you look at the above numbers, the business still looks amazingly consistent and strong since 2008.

It’s important to keep things simple and you may think that using multiple fair value models is a useless effort. However, you don’t want to accidentally focus on the incorrect valuation technique or oversimplify.

But you can only control the price you pay. Unless you know how to calculate what the fair value of a stock is, it’s pointless.

So use this valuation resource to either remind yourself how it’s done or get started today.