The former CEO of Goldman Sachs Asset Management, Leon Cooperman founded Omega Advisors, Inc. in 1991, since that time proving himself to be one of the most successful hedge fund managers of the current day. When he presented his most recent 13F filing last Friday, he unveiled a total of 79 holdings, valued at $7.02 billion.

Gaming and Leisure Properties Inc (NASDAQ:GLPI): GLPI was Cooperman’s biggest acquisition last quarter, the billionaire reporting 2.2 million shares of the company (valued at $112 million) as of December 31st. He paid between $41.20 and $50,82 for the assets, the company now composing 1.6% of his fund.

Sunedison Inc (NYSE:SUNE): SUNE is another big bet for Cooperman. The billionaire picked up 8.1 million shares of the solar energy company ($105.76 million), which now composes 1.5% of his fund. David Einhorn and George Soros also have positions in SunEdison.

T-Mobile US Inc (NYSE:TMUS): Cooperman joins Daniel Loeb and John Paulson as a T-Mobile stakeholder, the company now representing 1.45% of his portfolio. The investor picked up three million shares at a price range of $25.44-$33.05.

Last quarter, Leon Cooperman increased 22 of his positions. Here’s a look at his most notable moves:

SandRidge Energy Inc. (NYSE:SD): Cooperman purchased an additional 6.6 million SD shares during Q4, the company now composing 3.49% of his portfolio. He acquired the assets at prices between $5.26 and $6.90%.

The Omega Advisors manager scaled back 28 positions as well, the most significant being:

SLM Corp (NASDAQ:SLM): Leon Cooperman has held a position in SLM for more than five years, and last quarter, he sold 2.3 million of his shares. SLM still represents nearly 4% of his portfolio.

Motorola Solutions Inc (NYSE:MSI): MSI is a popular stock among billionaires, with stakeholders including Chase Coleman, Ray Dalio and George Soros. During Q4, Cooperman sold 358,000 shares, and today, the company represents 3.16% of his portfolio.

QUALCOMM, Inc. (NASDAQ:QCOM): Cooperman took a major step back with this one, reducing his stake by -7.30%. The tech company now comprises 2.76% of his portfolio. Qualcomm is a constituent of the iBillionaire Index and is also held by Steve Mandel, David Tepper, George Soros and Ray Dalio.

What is perhaps most surprising about Leon Cooperman’s Q4 activities is the fact that he unloaded a dozen stocks, including Atmel Corporation (NASDAQ:ATML), Polycom Inc (NASDAQ:PLCM) and  Penn National Gaming, Inc (NASDAQ:PENN). 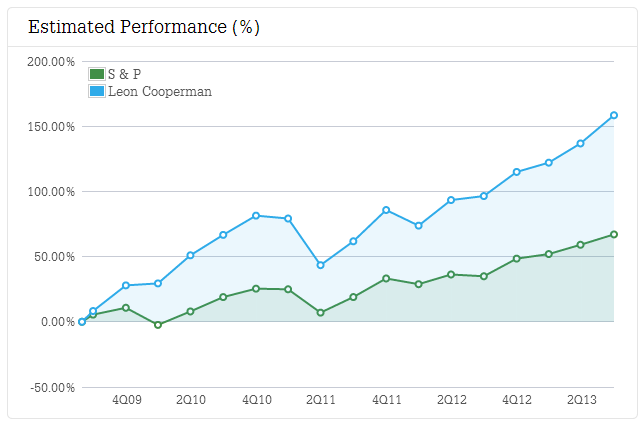 Leon Cooperman has an impressive track record, having outperformed the S&P 500 consistently for years. And by the looks of it, he won’t be slowing down anytime soon.