Hottest links for Thursday, February 20th, the late edition. Get our free daily newsletter and never miss a single linkfest. Also, now if you sign up you will get our new e-book on value investing.

Top stories for today are included below.  For your Thursday viewing pleasure, we’ve got some fascinating stories, including an update on the “Warren Buffett Indicator,” the two biggest mistakes ETF investors make, and a think-piece on chasing that ever-elusive alpha.

Is value investing dead? These managers don’t think so

For quite some time, value has been losing out to growth, and as a result, many have been wondering whether value investing is dead. At the Morningstar Investment Conference, Chuck Bath of Diamond Hill Capital Management, Ramona Persaud of Fidelity Investments and David Wallack of T. Rowe Price offered some insights into their value investing Read More

It’s not an accident that the greatest pure money manager of all time, Peter Lynch, was nicknamed The Chameleon. He earned the Chameleon moniker because he perceived the changing environments he found himself in and adapted his style accordingly. [Joshua M Brown, The Reformed Broker]

Ashmore Group plc (LON:ASHM) (OTCMKTS:AJMPF) is a kind of “intermediate” step in this regard: They are a UK-based asset manager who specialises exclusively in Emerging markets.  [Memyselfandi, Value And Oppurtunity]

Barry’s wonderful blog – although you may be re-thinking its wonderfulness given that I’m here – is, as you obviously know, called The Big Picture. His idea is to look at the investment universe using a very wide lens for a very broad audience, governed only by “facts, statistics, and informed, data-driven opinions.” [Barry Ritholtz, The Big Picture]

The attached chart shows the NDR Gold Sentiment Composite index, which is an amalgamation of a few polls on investor sentiment toward the metal. The red line spent most of 2013 in the territory index creator Ned Davis Research dubs “extreme pessimism.” [Brendan Conway, Focus on Funds] 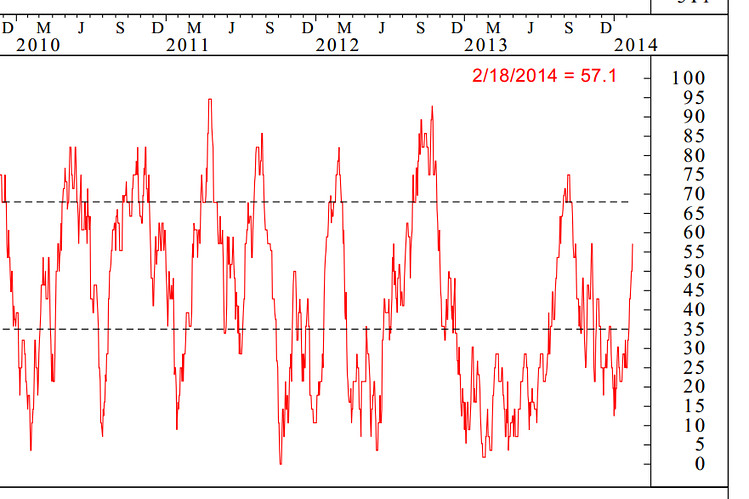 “The Warren Buffet Indicator” At Most Extreme Level Since December 2000

The ratio of the market value of equities outstanding to nominal GDP aka “The Warren Buffet Indicator” is at the highest level in about 13 years. This ratio became associated with Warren Buffet after he remarked in a 2001 Fortune Magazine article that this “is probably the best single measure of where valuations stand at any given moment”. [GaveKal Capital Blog] 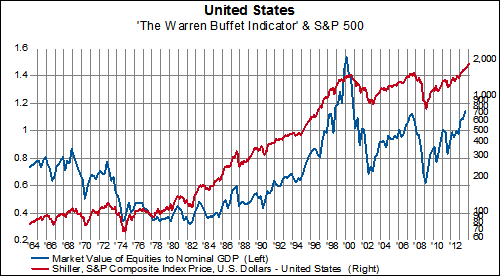 The first can happen in any investment — individual stocks, ETFs, even mutual funds. An individual investor who trades too much is giving up one of his only advantages versus Wall Street: The ability to wait. You don’t report to anxious shareholders who demand returns every quarter. [Brendan Conway, Focus on Funds]

Humans have been repeating this inefficient ritual for more than 700 years, with the first known origins were then in Europe. There sprung lenders and insurers who assessed the relative merits of individual commercial risk. [Salil Mehta, Pragmatic Capitalism]

World stock markets: How historic returns have varied by country

Deciding you should invest outside of the UK but then electing to put all your money in China is a case of out of the frying pan and into the wok. [The Investor, Monevator]

Questcor Pharmaceuticals Inc (NASDAQ:QCOR) is a biotechnology company with a $4 billion market capitalization. Good things keep happening to Questcor in the middle of the month. [Jesse Eisinger, The New York Times]

Companies ranging from chemical giants to restaurant chains have come under fire from shareholders wanting to break them apart, arguing that businesses perform better when they aren’t part of a sprawling conglomerate. The year isn’t even two months old, and already five companies have been targeted by investors pushing them to sell or spin off pieces, according to FactSet SharkWatch, which tracks such… [David Benoit, The Wall Street Journal]

As the title says- NPV modeling (scenario) vs Monte Carlo. Obviously, Monte Carlo modeling is the superior approach from a technical standpoint, but from a practical investment-making decision standpoint, it’s been discussed- that the spread of outcomes from MC’s in the gold mining sector (on a project by project basis) world would make any logical investment decisions exceedingly difficult- aside from the added effort/cost in forming the more complex model. [Phoneonbook, Reddit]

Two separate sources have told me that’s how much Google Inc (NASDAQ:GOOG) offered to purchase WhatsApp. The bid did not come with promise of a board seat, unlike the Facebook Inc (NASDAQ:FB) agreement. [Jessi Hempel, CNNMoney]

The markets’ Great Rotation is not sop much from global bonds to stocks, but from US investors into European equities. [Cliff Kule] 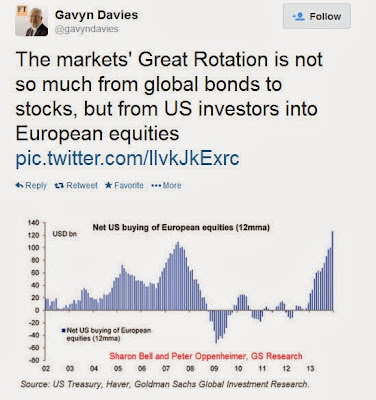 “At first we thought it was maybe a spice-grinder or needle case,” an archeologist told DNA Info of the relic found during a dig near New York City Hall. “We were stumped.” The hollow cylinder made of mammal bone, three inches long, turned out to be historic: a vintage douche, likely from between 1803 and 1815, making it “one of the earliest documented feminine hygiene products in New York.” But, for history buffs, it gets even better. [Joe Coscarelli, New York Magazine]