I come from the school of fundamental value analysis/investing. So when a client asked me to look into Unilife Corp (NASDAQ:UNIS) a few weeks ago, naturally, my first reaction was to look at their SEC filings and financial statements. It became immediately clear (as it should to anyone who’s spent more than 60 seconds looking) that this was not a company on which one could perform a discounted cash flow (DCF) valuation or any other traditional fundamental valuation, since their financials are an absolute and utter disaster of the highest order. DCF won’t work – it’d just be adding an enormous degree of false precision/certainty to an extremely uncertain and unpredictable set of financials – and comps are only useful insofar as they not only exist, but have similar activities, capital structures, etc. Option valuation is just another exercise in futility, especially considering the firm’s financial and operating history is all over the place, making any assumptions/inputs useless.

So how then are we supposed to value this company?

Frankly, I think attempting to value the company is jumping about 50 steps ahead, without taking the preceding 49. We must learn to crawl before we can walk (let alone jump!). Similarly, we must understand this company, the industry, sources and extent of demand, and other factors before we can even begin to throw darts at a board and value this firm. I’m not here to reinvent the wheel by parroting the same arguments made by others (see the many preceding Seeking Alpha etc. articles on the company). Rather, I’m going to try to point out some new ideas, or present existing facts in a new light.

For the uninitiated, part of fundamental analysis is getting to know the company and the various forces that act upon it, or with which it interacts. Don’t be so quick to dismiss this type of analysis as academic or ineffective. Unless you’re the type of person who prefers the “see no evil, hear no evil” method of investing. (If this is new to you, please pay attention, for your own sake): 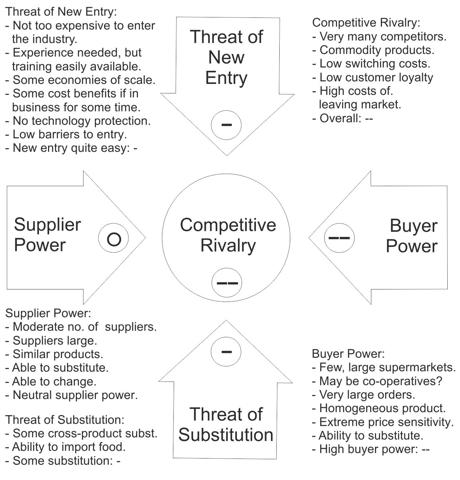 Using the 5-Forces framework, it doesn’t take a rocket scientist to realize that Unilife Corp (NASDAQ:UNIS) isn’t exactly in the best position.

Threat of New Entry: It operates in an industry with low barriers to entry. In fact, I can outsource design, manufacturing, distribution, etc to China, build a website and cold call pharma companies for not very much money at all.

Competitive Rivalry: The market for its products is intensely competitive and Unilife Corp (NASDAQ:UNIS) is among the weakest if not the weakest of the bunch. They can claim their products are differentiated enough that end users can market them to patients to differentiate themselves, but after speaking to a few doctors, that’s a load of nonsense, to put it gently. Their products aren’t that different from competitors and while they’ve worked with some big pharma companies, those firms have much bigger contracts with – and loyalty to – the entrenched players in the market (Becton Dickenson, etc). Several others have commented on this in depth, pointing out that the market for prefilled syringes is “oligopolistic in nature and is dominated by a few key players.” Besides Becton, there are other extremely similar (in end-users’ eyes) products from the likes of other, still much larger & established competitors such as Nipro, and West Pharmaceutical Services Inc. (NYSE:WST), which also makes a wearable product in case anyone was under the impression I’m just talking about prefilled/safety syringes.

Buyer Power & Threat of Substitution: Unilife Corp (NASDAQ:UNIS) is tiny. Its buyers (customers) are massive. Even if Unilife had the greatest syringe technology ever conceived by man, they couldn’t come anywhere close to satiating their customers’ needs. That’s a moot point since, as I mentioned, their products aren’t substantially different enough for a customer/end user to really care, and their customers hold all the negotiating power, anyway. Also, and I think this is a key point missed by almost everyone long the stock, why would a huge company do business with a tiny, unreliable, unproven supplier that can’t produce at scale? The answer is, they wouldn’t. The only reason Unilife gets a taste is because $40 million here or there for a big pharma company (on the chance their primary supplier screws up somehow) is literally a rounding error to them. Sanofi’s cost of sales last year was ~$15 billion (at current EUR/USD rate). $40mm is less than 1/3rd of 1% of that! No one at Sanofi is getting fired for doing a small (for them) run of prefilled syringes with Unilife. For those of you who still can’t grasp what I’m getting at here: Just because a few big pharma companies have done business with Unilife, it hardly means that Unilife is on the same level as the incumbent players.

If you disagree, please explain to me why Becton does over $4.3 billion in medical device revenue/year while Unilife is struggling to get a few million. Unilife is not a startup making syringes out of a garage; their products are just not significantly unique, their scale not sufficiently large, nor are their prices substantially low such that their target market is jumping at the chance to work with them. You’re welcome to hold on to the pipe dream that one day Unilife may get to that point, but you’re tying up your (presumably) hard-earned money until – IF – that day comes, you’re bearing a large opportunity cost by not putting your money into higher quality investments. Whether you’ve been following this company for years or you’re new, it matters not; the results thus far speak for themselves, and they are far from stellar.

As Unilife notes on its website, its products are not approved by the FDA. This is not a problem in and of itself since all of its products would be treated as Combination Products by the FDA, which are considered for approval by their Primary Mode of Action, which is not the device, but rather whatever drug the device holds/delivers. This is not to say the device is irrelevant in the approval process; the device is still part of the review. The FDA aims to review & act upon applications for generic drugs (like the ones Hikma makes) within 30 months. Unless the products are fast tracked for one reason or another, that means no real product sales for 2.5 years, minimum. I may be wrong here, but somehow I doubt, based on Unilife’s history, Hikma Pharmaceuticals Plc (LON:HIK) is going to take ownership of anywhere close to 175mm units/year in 2014, or 2015. Maybe, possibly 2016, so minimal revenue from the deal until then. Remember, Hikma is only paying Unilife $5mm upfront (per press release), which they recognize over the 15-year term of the agreement, not all at once, per thenotes to the financial statements in the last 10-k. The devil is in the details, don’t anchor onto the headline $40mm the company wants you to; the majority of that money is not guaranteed, and the portion that IS should be spread over a number of years, so the present value is really a small fraction of what you’re reading, and that’s really all that matters. Between the revenue recognition, amount, timing, and likelihood of the revenue from Hikma Pharmaceuticals Plc (LON:HIK), the deal really doesn’t justify its contribution to the subsequent increase in share price, at least not to the point where Unilife would be anywhere close to fairly valued by e.g. price/sales.

While Benjamin Graham may have been the first to really define and utilize term “margin of safety,” fund manager Seth Klarman took it a step further in the book he wrote by the same title. (You can buy a copy yourself on Amazon.com, Inc. (NASDAQ:AMZN), if you have $1,600. For many of you, especially if you are long this stock, the price paid – assuming you read and learn from it – will be more than worth it.) In Chapter 6, he writes:

“Because investing is as much an art as a science, investors need a margin of safety. A margin of safety is achieved when securities are purchased at prices sufficiently below underlying value to allow for human error, bad luck, or extreme volatility in a complex, unpredictable, and rapidly changing world.”

Let’s apply these concepts to Unilife, shall we? If you’re a buyer of Unilife stock today, at $4.63, is that below underlying value? How can we tell? If you so choose to rely upon the firm’s (ever-changing) financial condition to determine some sort of valuation, perhaps ratios of price to sales and book would be ones you might want to look at, absolutely and relative to Unilife’s peer group.

Utilizing these two valuation metrics, P/S of > 10x its peers and P/B of > double, would you consider Unilife undervalued – absolutely or relative to its peers – at today’s price? If you answer yes, I strongly suggest you have someone else manage your money ASAP. If, like a sane person, you answered no, you realize how crazy it would be to consider Unilife fairly valued, let alone undervalued. Remember, if things go south — e.g. if the company keeps burning through cash and it can’t keep raising (ahem, diluting) equity — bankruptcy is not far away. The company had $7.4mm in cash at the end of last quarter, but has been burning through about $12mm/quarter. Unless they recognized more revenue, earlier than I’ve accounted for, and/or severely reduced their operating expenses, the company is going to need more money ASAP, which if history is any indication means issuing more shares, and diluting yours, meaning every 1 share you have will be worth less than 1 afterwards.

We’ve determined that Unilife is probably not trading at or below fair value, that’s problem #1. If we assume, however, that the current price is still undervalued (a ridiculous proposition by any measure), where is our margin of safety, and how big is that margin?

Remember, it has to be large and broad enough “to allow for human error, bad luck, or extreme volatility in a complex, unpredictable, and rapidly changing world.” Loosely translated, as Klarman himself says: How much money can you afford to lose? This number will be different for each shareholder, but it is a question that must not only be asked, but answered. Will the company be able to keep raising new equity or sign enough substantial new deals that it doesn’t have to?

If Unilife doesn’t get that $15mm from Hikma in 2014, will it be able to cut costs fast enough and raise more new equity (or debt) before it’s too late? If there’s a broad stock market downturn, what will happen to the share price? If you’re long the stock, you must be prepared to suffer the consequences if any of these things even come close to happening. If you are not, then you do not have sufficient margin of safety and you are liable to lose more than you can afford, faster than you can imagine.

Ultimately, I find far more reasons to dislike this stock than I can possibly find – after much digging – than to like it, especially at $4.63. This company is levered and overvalued by the only two metrics we can really use, by enormous margins. Sure, they could sign a $500mm deal tomorrow, but the odds of that happening are less than slim, closer to none. If you’re still long this stock, you’re essentially long hope, because that’s all you have going for you in the grand scheme of things. I don’t know about you, but I’d rather be short an overvalued stock with oodles of red and orange flags than long hope every single day.