With another new year upon us mortals, we thought it is time again to check out the top 10 global risks ranked by Oxford Analytica.  Not surprisingly, from a geographical perspective, a majority of the top global risks come from the Middle East region (at 40%) and the Asia-Pacific region, specifically China, and North Korea (at 30%).  U.S., Europe, and Russia round out the rest. 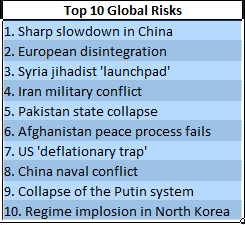 he ranking is mostly based on the potential size of global impact.  However, putting them under the lens of probability, a difference picture emerges (see graph below)

While the economic related risks such as a sharp slowdown in China, EU disintegration, and deflation in the U.S may rein supreme in terms of global impact, the probability of them materializing is actually less likely than the geopolitical risk in the Middle East (Syria, Iran, Pakistan and Afghanistan), and Asia (China, North Korea).

In terms of the type of risk, seven out of the top 10 risks are geopolitical, while only three are financial or economic.  So if we look at probability from this perspective, we are more likely to see a war or regime topple before another financial crisis rippling through the world again.

Regarding the ‘U.S. Deflationary Trap’, the Fed said last month it would reduce its monthly asset purchases by $10 billion to $75 billion, while also expressed worries about inflation.  Meanwhile, Fed’s balance sheet has ballooned to $4 trillion, we seriously doubt the U.S. deflationary scenario after Fed’s helicoptered five years worth of QEs.

Further Reading: Housing Market Setting Up For Another Crash

At this point, we at EconMatters believe that the Federal Reserve removing the Liquidity Punchbowl not because everything is fixed with the US economy, and we have fully recovered from the financial crisis of 2007, but because they have no other choice in the matter given the obvious asset bubbles they have created in the credit, bond and equity markets.

For now, the inflationary effect from QEs is mostly trapped in the stock and commodity markets (i.e. enriching the 1%), but inevitably it will manifest and spill over to the consumer side of things hitting hard on the 99%.  The removal of this liquidity, the resultant implications for financial markets, and potential future inflationary consequence of Fed’s QEs remain an under-appreciated risk to the global economy in our humble opinion.