I was wrong on the NuPathe special situation math yesterday.

I also chose not to rehash every piece of available information for obvious reasons. I just see no need to rewrite everything that has already been said about the deal.

However, there is a vital piece of additional information that I should have included.

But let me go over some of the common questions and concerns raised. I’ll also link to the updated excel spreadsheet.

Sometimes, the simple ones are the easiest to get wrong.

Here’s what you saw yesterday.

Here’s the correct one.

The numbers of shares differ, but that doesn’t matter in this example. 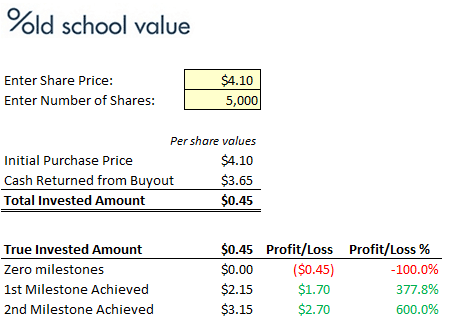 The Mindset to Approach Special Situations

Every investment come with a risk.

Special situations are no different which is why you want to find the ones where the probability of an event occurring is higher than the chance of it not happening.

When getting involved with special situations, you have to have an asset allocator’s mindset.

One of the areas I’m trying to improve on this year is just that. Instead of just trying to be an analyst, I need to think more like an allocator.

It’s like when I go to the gym and work out. I’m determined to put on some muscle so I hit the weights hard.

Then when I get home, I chill out with a burger and coke. And you know that the proper diet and rest has more influence on weight gain than working out.

By just trying to work out hard at the gym, I’m nothing more than an analyst.

To be a real investor, I’ve got to combine the proper allocation and position sizing along with analysis.

So when a deal like this comes along, it’s not just the margin of safety you should be purely focused on.

Then based on what you think, you need to limit your position sizing.

Probability says you should do it till the cows come home.

That’s what NuPathe Inc (NASDAQ:PATH) offers. You account for margin of safety with proper allocation.

Risk 1: The Buyout Can Fail

Yes there is a possibility that the buyout may not go through. But I place very little probability that this will happen.

I didn’t make any of this up. It’s all there in the filings.

Once the deal closes on Feb 20, your CVR (Contingent Value Right) is non-tradeable. Your cash is locked in, so you have to wait until the cash comes.

Like I said yesterday, close and open your eyes with 5 years in mind. Don’t expect anything quick.

Now I don’t see why the rights being non-tradeable is a risk, but there are people who view it that way because you don’t get access to your money again.

This is easily solved by allocating a tiny percentage of your portfolio. Something like 1%.

Again, it comes to having an allocator’s mindset.

Since net sales has to occur in four cumulative quarters, Teva Pharmaceutical Industries Ltd (NYSE:TEVA) could manipulate the sales so that it doesn’t reach the target every 4th quarter.

I don’t have personal experience in this space so I can’t say whether this is true.

But when looking at the information on hand;

This is entirely possible. The only thing I can say about this is that management is under a covenant to operate as they would have without a buyout.

Management teams always tend to project too optimistically. In this case, peak sales is expected to exceed $300m in year 10 (2024). That’s outside the 9 year window by the way.

Take a conservative percentage of that and the $300m target is unlikely to be reached.

The important piece of information I left out yesterday was the probability factor.

Here’s how I see it panning it out now. 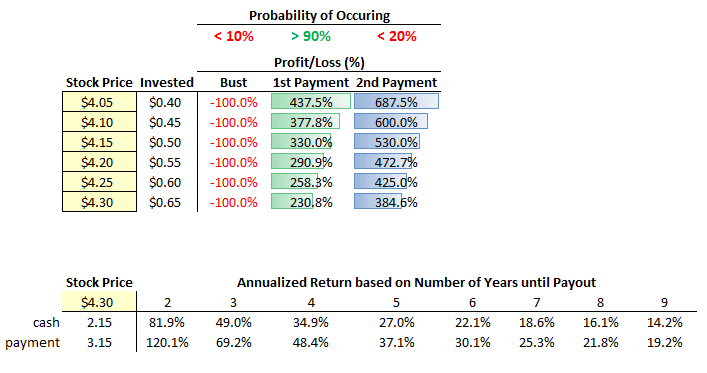 The highest probability is that you just get the first payment.

I’ve also included an annualized table so that you get an idea of what you are in for.

Download this updated excel spreadsheet for the calculations and to play around with it yourself. 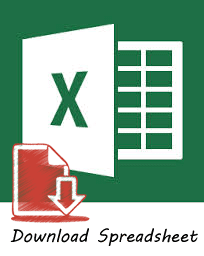 This post was first published at old school value.
You can read the original blog post here Special Situations Update: I Was Wrong on the NuPathe….