A Cost–Benefit Analysis of Student Loansby by Matt Busigin

Rising post-secondary education costs and the additional debt burden they are putting on today’s young adults have become popular topics of discussion. James Altucher stoked much of the present fire with his 2010 piece Don’t Send Your Kids to College. Jeffrey Gundlach has added to the chorus of education bubble callers, pointing out that real education costs have risen 5.4% annually since 2000 while graduate earnings have fallen –1.6%.

The questions we are left with are:

Gundlach’s analysis tells a story of decreasing affordability, but it does not indicate the actual economical position of post-secondary education, either for the individual or for the country.

What is behind the rise in education costs?

The short answer:  Education generates a very large payoff in income. The democratization of education across classes has been achieved through student loans, thereby increasing the demand for, and attainment of, education.

Educational attainment, once a leisure pursuit for the wealthy, has become an investment to increase lifetime earnings.  For adults 25–34 years old (Figure 1), there is a gap in income between bachelor’s degree holders and high school graduates of $15,000, or 50%. That gap isn’t likely to close over the course of a career. Starting salaries as measured by PayScale corroborate this number ($43,543 across all majors), with mid-career earnings (15 years of experience) rising 67% further to $72,753. The data are clear: Education is the path to higher earnings.

This fact isn’t lost on education consumers and has driven the preference for increased educational attainment. The pace of education inflation has run slightly more than double the rate of attainment growth (Figure 2). 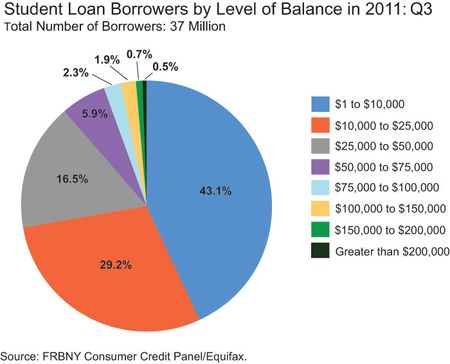 The mean outstanding balance is just over $23,000, but the median is only $12,800 — roughly half the mean value. Most  borrowers have reasonably small student loan balances, with the few big borrowers skewing the average higher.

Figure 5: The long decline in the pace of education inflation [Source: 5]

This trend has at least two plausible explanations. The first is that the supply curve has shifted, albeit not as fast as the demand curve, with the expansion of student loans. Another is that marginal educational attainment likely comes from a marginally weaker economic background, which reduces the expectation for future income (even with the added education), and the financially weaker education consumers likely choose cheaper options as a result.

Education shares many characteristics with capital goods. Both can be measured by their marginal efficiency (the difference between future value and supply price) and economic utility, which we will define as the marginal efficiency after opportunity cost. (There are many terms used to describe these concepts in the media, such as net worth, but they are not consistent with the common parlance of economics.)

The individual economic utility of education varies wildly. PayScale has done much of the heavy lifting for us by calculating the excess earnings after accounting for costs and graduation rates to be $333,455 over 30 years. 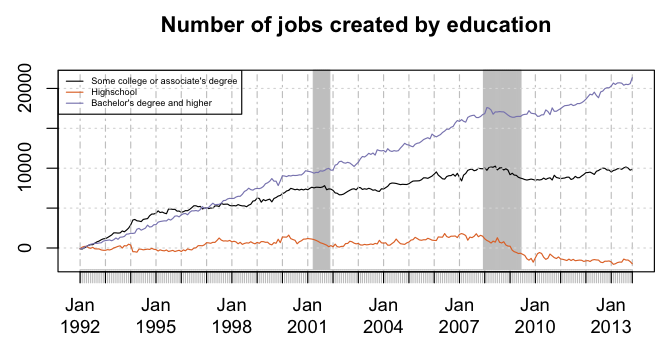 It is impossible to dismiss the first explanation in its entirety. It is difficult to get a resume past recruiters’ recycling bins without a degree. However, it’s counteracted by profit maximization, which incents employers to minimize labor expenses while maximizing productivity. Given the large gap in earnings between people with different education levels, employer behavior seems to mostly reject the “domestic-based qualification inflation” argument, since employers find greater utility in paying more for even more productive workers.

Global labor competition over the past several decades may lead to an understatement of the economic utility of education. Had attainment rates not strongly increased, it is likely that real median earnings would have fallen since the educational attainment epoch of the mid-1990s, instead of merely being flat. The increased educational attainment potentially rescued as much real income in the United States as it was responsible for net new income. 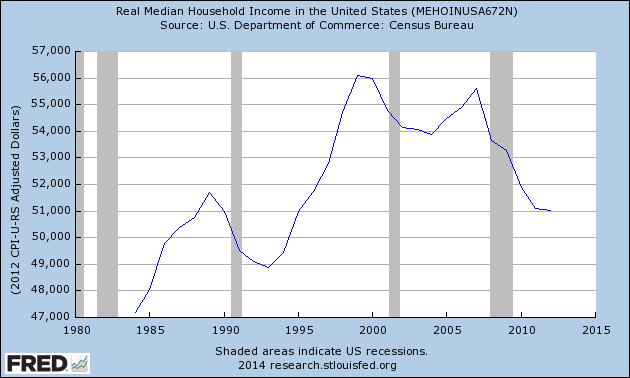 It is also important to note that cyclicality has covered up some of the household income benefits (Figure 7). For instance, during past recessions, when actual economic output was below potential output, the income of specialists, who tend to be the most educated and also the most vulnerable to cutbacks, may have been reduced. If true, this could make much of the present dip in median real household income temporary.

The rise in education costs is commensurate with a rise in educational attainment. Attainment increases are driven by demand for higher income. Even after accounting for costs, graduation rates, and opportunity costs, post-secondary education is economical, adding $11,115, or 32%, per year to the median high school wage. The median student loan debt, $12,800, is just shy of a single year’s worth of economic utility generated by post-secondary education spending.

Most importantly, don’t forget to calculate the benefit of the 50% increase in post-secondary educational attainment when weighing the increased costs. It’s disturbing to think where incomes may have been without it.

For the individual, the payoff in future income for completing a degree remains very high. As with any form of investment, the composition of results is highly varied, and there are uneconomical outcomes. On balance, it is as important to households to preserve purchasing power across generations as it is to grow it. Becoming a more productive, better-educated world should be something we nonetheless embrace.