Hottest links for Saturday-Sunday, 21th-22nd December, the weekend edition (see Friday’s edition of hottest links). Get our free daily newsletter (which HAS BEEN RECENTLY UPDATED) and never miss a single linkfest. Also, now if you sign up you will get our new e-book on value investing.

Top stories for today… Lots of great stories and value write ups, the theme of today and 2014 is boring. How much time should you spend on investing? Morgan Housel argues one percent, what about the rest of the time? Do nothing at all! A great value site lists its 24 favorite boring stocks for the year of 2014; Investment Checklists are getting hot; Why you should consider using one before jumping to buy bitcoin, Tesla etc. Another great Not The Onion today, make sure to check it out. That and much much more below.

Consider the following chart, which shows the average investor portfolio allocation to equities from January 1952 to December 2013: [Philosophical Economics]

10 Lessons To Learn From Poker

“Step right up and try your luck…spin the wheel and watch where she lands…everybody’s a winner” – sometimes if you listen hard enough you can almost hear the Carney coaxing unwary investors to step up and try their luck in a game that has been rigged against them. [Lance Roberts, Pragmatic Capitalism]

I continue to get a kick when ideas I discussed now almost two years ago writing Abnormal Returns: Winning Strategies from the Frontlines of the Investment Blogosphere resurface in the finance mainstream. [Tadas Viskanta, Abnormal Returns]

99% of Long-Term Investing Is Doing Nothing

Most financial advice is about today — what should I do now, what stocks look good now. But the vast majority of the time, I’ve come to realize, today isn’t that important. It’s just buying and waiting. [Morgan Housel, The Motley Fool]

December is always a good time to look at the portfolio and revisit the initial investment case in order to decide if all the investments are still “on track”. [ValueAndOppurtunity]

A Thank You, An Update, and Some Thoughts on 2013?s Ideas

In the course of this year I wrote about more than 30 different companies. Many of these have performed extremely well, some of them reaching or exceeding my opinion of fair value. Quality Products’ shares lagged in 2013, even as the company continued to profit and expand. [OTC Adventures]

Have Strong Conviction, But Hold It Weakly

In order to better understand this elusive concept of conviction in investing, I recently had the pleasure of speaking with Mariko Gordon, Founder, CEO and CIO of Daruma Capital Management based in New York. [Oliver Mihaljevic, BeyondProxy]

This Is The Most Important GIF Of 2013

The most important GIF of 2013 shows the recent shift in the eurodollar forward curve. Let’s talk about what this means. [Matthew Boesler and Mike Nudelman, Business Insider]

Why Soros Management Moved into Dry Bulk Shippers in Q3 2013

Although the Baltic Dry Index has been on a tear in 2013 I can’t recall the last time we had a post on it or the shipping companies. As the Financial Times reported last week. [Climateer Investing]

The 2013 performance of iShares Inc. (NYSEARCA:EEMV), the category inflow leader with a fresh $1.7 billion this year, compares favorably versus the plain-vanilla iShares MSCI Emerging Markets Indx (ETF) (NYSEARCA:EEM). It’s down 1.6%, versus the latter’s 6.6%. [Brendan Conway, Focus on Funds] 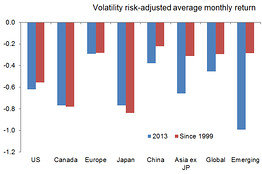 Activist investors have been around for a long time, but in 2013 they shook up corporate +America like never before, agitating for change at some of the nation’s most iconic companies, ranging from Apple Inc. (NASDAQ:AAPL) to Microsoft Corporation (NASDAQ:MSFT) and PepsiCo, Inc. (NYSE:PEP). [Nathan Vardi, Forbes]

US land prices drop for first time in four years

US farmland prices have fallen for the first time in four years, undermined by weakness in agricultural commodity prices evident in a drop in wheat prices to 18-month lows this week, while corn stands near three-year lows. [Climateer Investing]

For a Hedge Fund Pioneer, a Tiger Fund Burning Bright

Julian Robertson, the billionaire investor and an early pioneer of the hedge fund industry, is  again proving to be a top picker of new talent. [Matthew Goldstein, DealBook]

Wells Fargo & Co (NYSE:WFC) will start knocking more loudly on the bulge bracket’s door. The California lender is already one of the top 10 global investment banks by fees, according to data from Thomson Reuters. [Antony Currie, DealBook]

Corporate profits have been soaring during the recovery, by one measure sitting at their largest share of the U.S. economy since World War II. Buried inside Friday’s economic data, the government gives us ten ways to show how well corporate America is doing. [Eric Morath, Real Time Economics]

The hard-landing hedge fund: A new way to bet against housing

A Toronto financial firm is creating a hedge fund that will allow Canadian investors to bet on a housing slump, a move that underscores the skepticism that exists about policy makers’ ability to engineer a soft landing for the real estate market. [Tara Perkins, The Globe And Mail]

The BCSC’s allegations are false and without merit.  I am taking legal action to both defend my reports and to hold accountable those public servants at the BCSC who have ignored my warnings about Silvercorp Metals Inc. (NYSE:SVM) (TSE:SVM). [Jon Carnes, Alfredlittle.com]

Greenspan 3.0 and Other Random End-of-Year Thoughts

The year is winding down, people are getting ready for the holidays, and I am working on my last few columns of the year for Bloomberg View.  [Barry Ritholtz, Bloomberg]

This is Steven A. Cohen before he gained $9.4 billion and lost his hair. A classmate from the University of Pennsylvania at Wharton, from which the hedge-fund tycoon graduated in 1978, shared this photo from the Zeta Beta Tau fraternity, where Cohen was treasurer. [Richard Johnson, Page Six]

Many of its elevators have doubled as restrooms and smell like it. That’s about to change with first-of-its-kind technology which catches “offenders” literally — with their pants down. [WSB-TV 2]