Before this year’s gigantic rally, I wrote about the unexpected risk of a Double Rip. At that time, all the talk and concern was over the likelihood of a “Double Dip” recession due to the sequestration, tax increases, Obamacare, and an endless list of other politically charged worries. 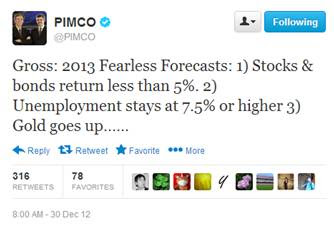 Well at least Bill was correct on 1 of his 4 predictions that bonds would suck wind, although achieving a 25% success rate would have earned him an “F” at Duke. The bears’ worst nightmares have come to reality in 2013 with the S&P up +25% and the NASDAQ climbing +33%, but there still are 11 trading days left in the year and a Hail Mary taper-driven collapse is in bears’ dreams. 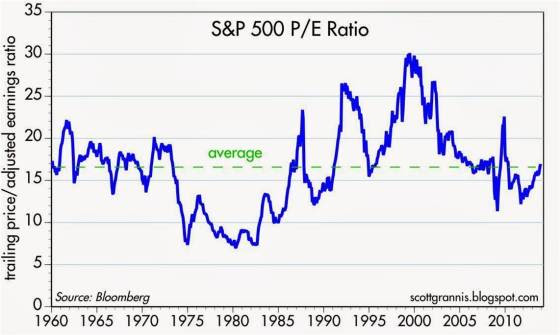 For bulls, the year has brought a double dosage of GDP and job expansion, topped with a cherry of multiple expansion on corporate profit growth. As we head into 2014, at historically reasonable price-earnings valuations (P/E of ~16x – see chart above), the new risk is no longer about Double-Dip/Rip, but rather the arrival of the “dumb money.” You know, the trillions of fear capital (see chart below) parked in low-yielding, inflation-losing accounts such as savings accounts, CDs, and Treasuries that has missed out on the more than doubling and tripling of the S&P and NASDAQ, respectively (from the 2009 lows). 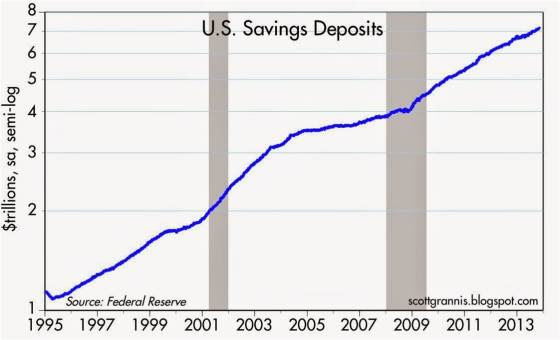 The fear money was emboldened in 2009-2012 because fixed income performed admirably under the umbrella of declining interest rates, albeit less robustly than stocks. The panic trade wasn’t rewarded in 2013, and the dumb money trade may prove challenging for the bears in 2014 as well.

Despite the call for the “great rotation” out of bonds into stocks earlier this year, the reality is it never happened. I will however concede, a “great toe-dip” did occur, as investor panic turned to merely investor skepticism. If you consider the domestic fund flows data from ICI (see chart below), the modest +$28 billion inflow this year is a drop in the bucket vis-à-vis the hemorrhaging of -$613 billion out of equities from 2007-2012. 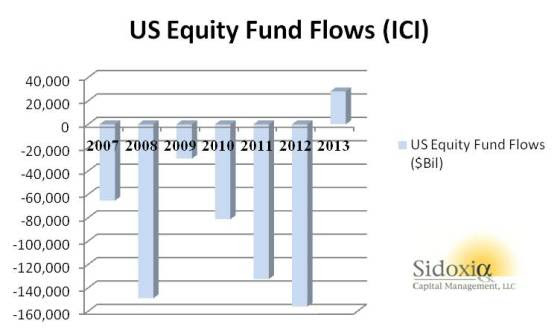 Will I be talking about the multi-year great rotation finally coming to an end in 2018? Perhaps, but despite an impressive stock rally over the previous five years in the face of a wall of worry, I wonder what  a half trillion dollar rotation out of bonds into stocks would mean for the major indexes? While a period of multi-year stock buying would likely be good for retirement portfolios, people always find it much easier to imagine potentially scary downside scenarios.

It’s true that once the taper begins, the economy gains more steam, and interest rates begin rising to a more sustainable level, the pace of this stock market recovery is likely to lose steam.  The multiple expansion we’ve enjoyed over the last few years will eventually peak, and future market returns will be more reliant on the lifeblood of stock-price appreciation…earnings growth (a metric near and dear to my heart).

The smart money has enjoyed another year of strong returns, but the party may not quite be over in 2014 (see Missing the Pre-Party). Taper is the talk of the day, but investors might pull out the hats and horns this New Year, especially if the dumb money comes to join the fun.

DISCLOSURE: Sidoxia Capital Management (SCM) and some of its clients hold positions in certain exchange traded funds (ETFs), but at the time of publishing SCM had no direct position in any other security referenced in this article. No information accessed through the Investing Caffeine (IC) website constitutes investment, financial, legal, tax or other advice nor is to be relied on in making an investment or other decision. Please read disclosure language on IC Contact page.