Hottest links for Saturday and Sunday November 9th – 10th, 2013 the weekend edition (see Friday’s edition of hottest links). Get our free daily newsletter (which HAS BEEN RECENTLY UPDATED) and never miss a single linkfest.

Top stories for today are included below. Lots of great articles including an in depth (and new profile) of investing guru Peter Lynch (and if you have not done so make sure you read One Up on Wall Street and Beating the Street; Also two great interviews with behavioral expert, Michael Mauboussin; A great profile of one of America’s favorite CEOs, Alan Mulally; Jason Zweig with his usual great weekly piece; Guess which ETF is dirt cheap despite a huge rally? Hint it is related to ValueWalk’s June 2012 article titled-  Ignore Greek Elections: Stocks Might Be The Best Buy In Over 60 Years; Read David Merkel’s article about frothy markets I dare you to guess when it was written; Also a superb, long article about Howard Marks’ great buys during the financial crisis

Treasure Hunters of the Financial Crisis

“Unless the second Great Depression lies ahead,” Howard S. Marks, Oaktree’s chairman, wrote to their clients on Oct. 6, 2008, “today’s purchases should produce substantial returns, and in a few years we’ll reminisce together about how easy it was to take advantage of the bargains of 2008-09.” [Peter Lattman, NYTimes]

The Role Of Luck And Skill In Investing

Michael Mauboussin is head of Global Financial Strategies at Credit Suisse and the author of several books, including The Success Equation: Untangling Skill and Luck in Business, Sports and Investing (Harvard Business Review Press, 2012). He and I spoke about the role skill and luck play in investing. [Charles Rotblut, Forbes] I recently had the privilege of interviewing Mauboussin about his involvement with the Santa Fe Institute and his thoughts on complexity. [ElliotTurner, Compounding My Interests]

Chilling Signs of a Market Top

Absurd valuations, whether high or low, can become even more absurd if the expectations of market participants become momentum-based. Momentum investors do not care about valuation; they buy what is going up, and sell what is going down. [Joshua M Brown, The Reformed Broker]

The Cheapest ETF In The World

For the past three years, all of the news coming out of Greece has been negative. To illustrate just how absurd that figure is, take a look at the 10 cheapest single-country ETFs in our system. Of course, a P/E ratio is only applicable to equity ETFs. [Paul Baiocchi, IndexUniverse]

Backtests: Your Next Big Investing Headache

The fund industry — especially its hot ETF segment — continues to churn out new investing strategies. “Backtests” are the math telling you what a strategy’s returns might have been ten or twenty years ago. [Brendan Conway, Focus on Funds] 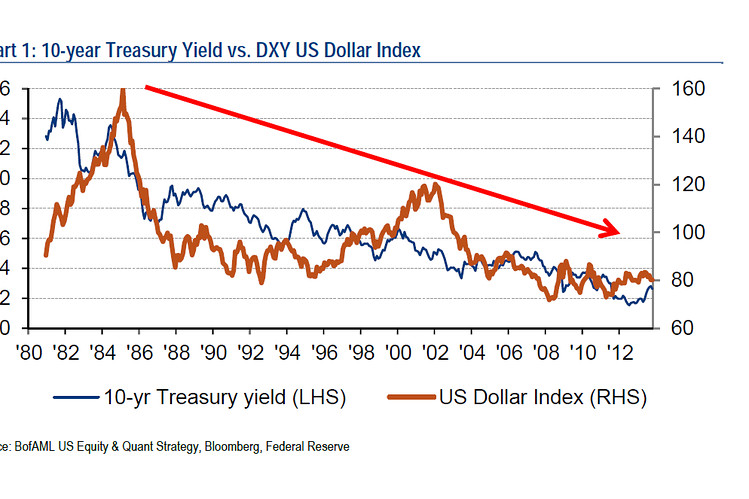 While Eurozone unemployment hovers at record highs, investors are embracing European equities. The Vanguard FTSE Europe ETF (NYSEARCA:VGK) is one of the top 10 ETFs this year in terms of inflows and last month, Pan-European ETFs raked in $7.9 billion last month, the third straight month of record-breaking inflows, according to BlackRock data. [Todd Shriber, ETFTrends] Peter Lynch Once Managed Money. Now He Gives It Away

Today he and his wife of 45 years, Carolyn, spend most of their time working on the Lynch Foundation, which they started 25 years ago this month. “It’s a public foundation, but not many people know what we do,” Peter Lynch  said. [Wealth Matters, The New York Times]

Jordan Belfort Had A Pretty Nice Little Set Up In Prison

As Chong describes it, the Taft Federal Correctional Institution would beat many Manhattan hotels for comfort. He says Belfort’s arrival “was like Elvis coming to jail” and that his roommate spent his days playing tennis and backgammon, cleverly hiring other inmates to do his chores for him. [Bess Levin, DealBreaker] The former boiler room king, Jordan Belfort, is ready for his closeup as The Wolf of Wall Street heads into theaters this December. [Joshua M Brown, The Reformed Broker]

Bear Creek Mining Corp. (CVE:BCM) (OTCMKTS:BCEKF) has a current market value of $215 million with 330 million P+P ounces ; costing roughly $0.65 on a per-ounce basis. Why so cheap? Scorpio Mining Corporation (TSE:SPM) (OTCMKTS:SMNPF)’s current price is .21 with a .72 per share book value. The book value is comprised of per share value of cash at .13, Receivables .03, Net PPE .48 to give us total assets of .75. Karnalyte Resources Inc (TSE:KRN) owns a 100% interest in subsurface Permit KP 360A comprising 68,301 acres; and subsurface mineral lease KLSA-010 consisting of 16,825 acres located near Wynyard, Saskatchewan. Exeter Resource Corporation (TSE:XRC) (NYSEMKT:XRA)  holds a 100% interest in the Caspiche gold-copper project located in the central Chilean Andes of Northern Chile. [ShadowStocks]

A Few Good Reasons to Hoard Some Cash Now

The stock market is near record highs. More money came into U.S. stock mutual funds the week of Oct. 23 than during any other week since 2007. Initial public offerings like Twitter Inc (NYSE:TWTR) are booming. [Jason Zweig, MoneyBeat]

An interview with Ford’s Alan Mulally

Automaker Ford Motor Company (NYSE:F) was losing billions of dollars when Alan Mulally took the wheel, in 2006. Here, he reflects on his leadership style and his efforts to turn around the organization. [Rik Kirkland, McKinsey]

The Return Of The Mini-Tender?

Last Friday, we came across an unusual filing in the weekly Friday Night Dump. While we tend to look at most 8Ks that come in late on a Friday for our Pro subscribers, the fact that it came from a company — International Business Machines Corp. (NYSE:IBM) — that we used to focus on somewhat obsessively in our pre-footnoted days, tilted the scales even more. [Footnoted]

Hottest Links: Not the onion

I don’t know if this is funny or sad, but it’s a real news report on a local station in Tulsa, Oklahoma about Jim Pace and his fellow ghosthunters. The report focuses on one haunted house where “ghosts” have scrawled “The Cake Is a Lie” on a basement chalkboard. [Nerd Approved]