Hottest links for Friday November 1st, 2013 the on time edition (see Thursday’s edition of hottest links). Get our free daily newsletter (which is being updated currently to make it even better) and never miss a single linkfest.

Top stories for today can be found below. There is a new hottest stock in town and it is not Herbalife (or JCP), NQ Mobile is possibly the most polarizing stock since the days of Tesla and Herbalife (and JCP). Carson Block is at it again and shares are now down over 8 percent, and it appears this fight is just starting. Check that out and much more in today’s hottest links.

Focus on What You Can Get for Free: Part 1/2

Consider the Vanguard 500 Index Fund (NYSEARCA:VOO). This ETF invests in stocks in the S&P 500 INDEX (INDEXCBOE:SPX), has an expense ratio of 0.05%, and thus represents a very inexpensive (and tax efficient) way to get exposure to the performance of the 500 of the largest companies in the U.S. Buying such an ETF is a solid strategy for most investors. [David Foulke, Turnkey Analysts]

Lie detection is at the crux of psychology and criminal justice. Much has been writtn about the body language, the subconscious expression and the linguisitic sidnifiers of deception. In terms of investment, stopping fraud could save billions, as any investor in Enron, Worldcom or Madoff Investment Securities could attest. [Frances Denmark, Institutional Investor]

Berkshire Hathaway Inc. (NYSE:BRK.A) (NYSE:BRK.B)’s cash position is back up to $40 billion. The media’s take is that he has so much cash that he doesn’t know what to do with it. [Joshua M Brown, The Reformed Broker] Related; Warren Buffett’s favorite market indicator shows the US stock market is overvalued. [Dan McCrum, FT Alphaville]

Passive investing in market index funds has been labelled a “parasitic” business. However, re-designing index investing rules to account for corporate moves such as mergers and acquisitions could make passive the new active. [Thomas Aubrey, AlphaNow]

The hedge-fund industry ramped up hiring for entry-level positions in 2013, according to a new report from Hedge Fund Research. The average compensation for a mid-performing fund for those entry-level hires was a total of $353,000, including bonuses, according to HFR and its study partner Glocap. [David Benoit, MoneyBeat]

Citigroup Inc (NYSE:C) has a message for the international companies it advises: Watch out for the activists. TCI, an activist hedge fund, took a stake in French aerospace company EADS NV (EPA:EAD), encouraging it to sell its stake in Dassault Aviation SA (EPA:AM) (OTCMKTS:DUAVF). Third Point Management, run by Daniel S. Loeb, has a stake in Sony Corporation (NYSE:SNE) (TYO:6758) of Japan and is agitating for change. And the activist investor Knight Vinke has called for a breakup of the Swiss bank UBS AG (NYSE:UBS). [David Gelles, DealBook]

Margin Debt: What Does it Really Tell us?

I’ve seen some ”debunkings” of margin debt in recent weeks that remind me of the repeated claims in 2006 where most people thought the household debt bubble was totally benign. [Cullen Roche, Pragmatic Capitalism]

U.S. Venture Capital Index, which is based on data compiled from 1,439 venture capital funds, shows venture capital funds outperforming indices like the SPDR Dow Jones Industrial Average ETF (NYSEARCA:DIA) only in the short term (the three months to June 30) or the long term (15 or 20 years). [Climateer Investing] 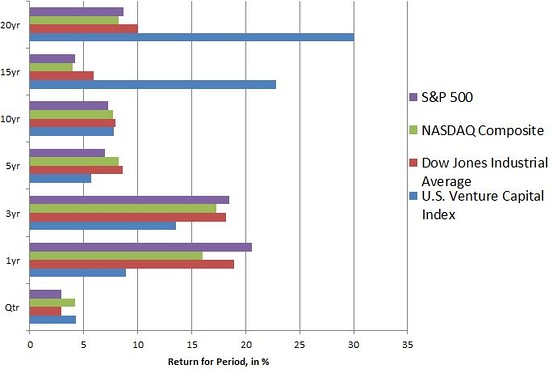 That’s what energy market traders—many of them at hedge funds down double-digits for the year—think of the opportunity in natural gas, electricity and other power-generating commodities outside of oil. [Lawrence Delevingne, CNBC]

Steve Cohen is now parting with about $80 million worth of blue-chip art at the important auctions that begin next week at Sothebys (NYSE:BID) and Christie’s. [Carol Vogel and Peter Lattman, The New York Times]

International Business Machines Corp. (NYSE:IBM) felt it would be beneficial to patent the patent strategy process all the way from training inventors, to competitor monitoring and protecting (i.e. suing someone) a patent from infringement. [Douglas Perry, Tom’sHardware]