By EconMatters It was just last month that U.S. lawmakers brokered a deal suspending the debt ceiling through February 7 to end the government shutdown, and the Treasury Department could continue borrowing.  After the debt ceiling February 7 deadline, Treasury will still be able to use the “extraordinary measures” to stave off default.

With the current national debt at an unprecedented $17.1 trillion (One analyst thinks it could double to $34 trillion), any reasonably intelligent person would wonder how long this kicking-the-can band-aid will last.  Both the Bipartisan Policy Center and Treasury Secretary Jacob J. Lew have estimated that the extraordinary measures would run out in a month or so, i.e. by March, 2014.
Now according to a report issued today by the Congressional Budget Office (CBO), U.S. may be able to push the debt ceiling deadline to as late as June because the income tax receipts around the April 15 tax deadline may provide more cash cushion to meet scheduled obligations.

Overall, the federal government is expected to run a significant deficit for fiscal year 2014….. Given the volume of the government’s daily cash flows and the uncertainty about the magnitude of key transactions…., the Treasury could exhaust its extraordinary measures and authority to borrow as early as March or as late as May or June.

How did America get itself into this predicament?  Slowly but surely… by outspending its revenues. The chart below from USA Today illustrates Federal Revenues vs. Federal Spending since 1996 (in trillions of current dollar).

Meanwhile, OECD is already freaking out about the prospect of a U.S. debt ceiling bind.  In its global economic outlook presentation yesterday, OECD included these three scary charts to demonstrate the dire economic consequence to the U.S. and the rest of the world with a debt ceiling brinkmanship for an entire year. 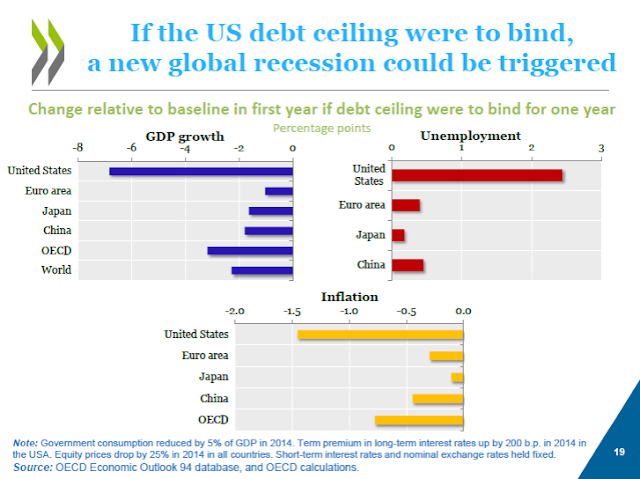 It is highly improbable that the U.S. Congress would risk their re-election by letting the debt limit gridlock (and government shutdown) go for a whole year.  Nevertheless, I do think OECD is concerned about the negative impact on the already fragile global economy and stock markets, even for just a few weeks.

Mind you that raising the debt ceiling does not resolve the root cause of debt limit breach. To avoid the recurring debt ceiling showdown, Washington has to address how to cut federal spending and/or increase revenues.  Unfortunately, any federal revenue increase, in my view, will involve some kind of tax increase mostly to the middle income class.  And cutting the federal spending seems to be in the constant mode of one step forward, two steps back.

Unlike Fed’s QE which benefits mostly the top rich 1% (and should be ‘tapered’!), federal spending, however wasteful it may be at times, actually does get injected into the real economy. So when billions of federal spending disappears from the economy, it will translate into revenue and employment losses affecting many government contractors and the middle income America.  Furthermore, whatever savings from spending cuts that may have materialized tends to get sucked away by some colossally mis-managed government program such as ObamaCare, whose bills eventually will need to be footed, again by no other than the middle income class.

While the middle income class has been a major force reshaping America since World War II, I doubt there’s much juice left to help dig the country out of this debt trap.  All in all, 2014 should be a year of several critical decisions for the United States on its debt limit, monetary (QE) program, or maybe Obama would go down in history as the ObamaCare President minting the $1 trillion platinum coin?