Apple Inc. (NASDAQ:AAPL) is holding an event today at 1 PM EST. Reports seem almost certain that the company is planning on launching its latest tablet computer, the iPad 5, at today’s event. Apple might be going to surprise us today. More outlandish rumors of the company’s plans include the release of an Apple Inc. (NASDAQ:AAPL) smart watch and the release of a full Apple television.

Can’t wait to get underway. Having fun backstage.

There has been a dearth of rumors about what Apple Inc. (NASDAQ:AAPL) is going to do with the iPad 5. The company is likely to release a thinner and lighter iPad with a thinner bezel. The device will probably come with the same color options as the iPhone 5s. That means gold, silver and space-grey.

In terms of features, the iPad 5 is bound to be faster, and there’s a good chance it will come with a longer battery life than the iPad 4. The new tablet might come with a Touch ID sensor like the iPhone 5s.

14:17 EST: iPad Mini with Retina Display has ten hours of batter and the A7 chip inside.

14:16 EST: iLife and iWorks will all come free with the iPad Air. iPad Mini is up now

14:05 EST: Next generation of iPad is up. 9.7 inch display. Small Bezel like the iPad mini. thinner and lighter. A new name. It’s called the iPad Air. This means a bigger one might be on the way!

14:02 EST: iPad updates have to be coming up, we can’t be looking at sales numbers and consumer satisfaction forever.

13:58 EST: Finally Cook is talking about the iPad.

13:56 EST: iWork is entirely going for the cloud. It’s free with any new Mac or iOS device and it’s available today for download. It’s not the product that enterprise customers are going to go for, but it’s a step in the right direction.

13:50 EST: On to iWork now, completely redesigned for Mac apparently.

13:49 EST: iLife does a lot with the cloud, the Garageband demo looks great, and the updates are all available today. The suite is available free on all new Macs.

13:41 EST Mac Time is over. Three new releases. MacBook with Retina 13 inch and 15 inch and the slow and slower launch of the Mac Pro.

13:34 EST: Thuderbolt 2 on the Mac Pro powers up to three 4K displays. One with HDMI two on Thunderbolt.

13:29 EST: 15 inch will have Crystalwell chip, Iris Pro graphics, 8 hours battery, price is at $1999 for the lowest specs, $200 down from last year. Shipping starts today on both MacBook Pro with Retina Display models.

13:15 EST: Mavericks concentrates on integrated graphics. Memory is used more efficiently, and integrate graphics will be more powerful with the upgrade.

13:13 EST: OSX Mavericks updates hardware through software according to Federighi. Macs have an hour longer of battery life with the updates.

13:11 EST: Cook says that PC makers are confused. They’re trying to turn tablets into computers and the opposite.

13:05 EST: Cook is talking about Apple Inc. (NASDAQ:AAPL) retail. Here’s a picture of Cook from cnet. 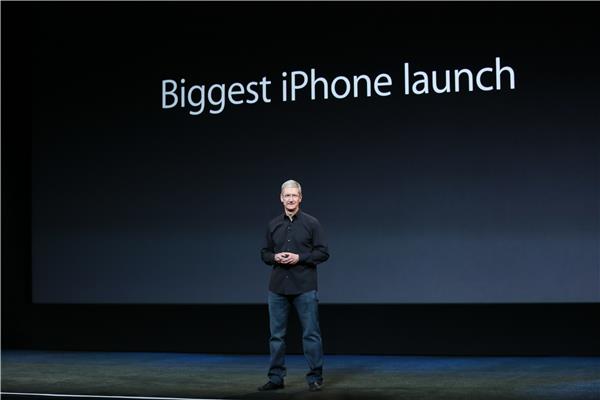 13:04 EST: Tim Cook is talking about the update and the sales of the iPhone 5s and the iPhone 5c. This is old news, but they have to pump older products.

12:55 EST: Here’s a pic from Mashable of theater before the show starts. 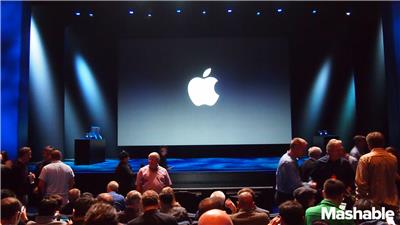