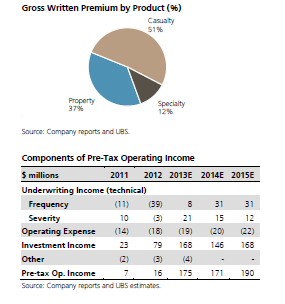 UBS analysts, Brian Meredith and Marie Lunackova, explained that they increased their price for Greenlight Capital Re, Ltd. (NASDAQ:GLRE) from $29 to $34 per share to reflect its higher earnings for the third quarter. The analysts estimated that the reinsurance company will deliver $0.53 earnings per share.

Valuation multiple for Greenlight is conservative

Meredith and Lunackova believed that Greenlight Capital Re, Ltd. (NASDAQ:GLRE)’s ROEs are attractive with the assumption that its investment returns are in line with historical results. The analysts noted that the returns of the reinsurance company are not pressured by a low interest rate environment because 100 percent of assets are invested in its parent hedge fund.

The analysts projected that Greenlight Capital Re, Ltd. (NASDAQ:GLRE) will be able to generate mid- to high-teens ROEs, around 15.3 percent in 2014. Meredith and Lunackova emphasized that their estimate is higher than their 11.7 percent estimated average returns for other reinsurance firms under their coverage.

According to the analysts, their estimate for Greenlight Capital Re, Ltd. (NASDAQ:GLRE) included its annualized investment portfolio return of 10 percent, which is in line with its average return since its inception. 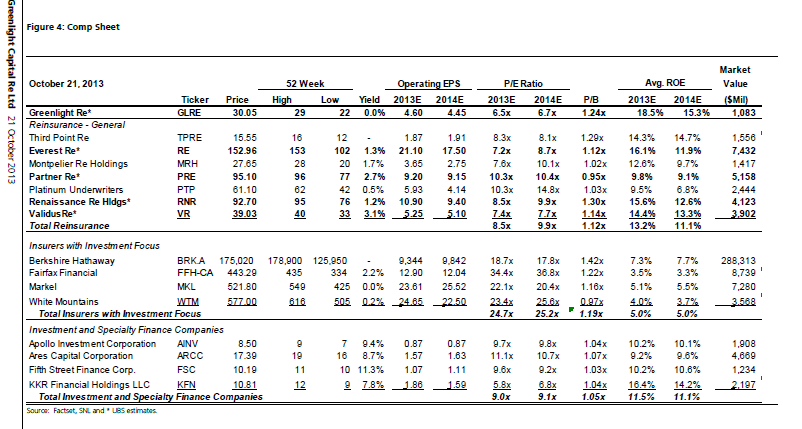 Investment returns can be volatile

Meredith and Lunackova recognized that investment returns can be volatile, but they pointed out that their downside scenario for the stock is manageable as they assume an annualized investment portfolio return of only 2 percent until 2014. Under such circumstances, they perceived that the fair value of Greenlight Capital Re, Ltd. (NASDAQ:GLRE) is around $27 per share, 9 percent lower than its current price. As of this writing, the stock is trading around $30 per share.

The analysts maintained their buy rating for the stock and their $34 price target represents a 13.5 percent cost of equity and 15.3 percent expected ROE in 2014. They assumed that the stock will trade at 1.15x multiple of 12-month forward BVPS estimate of $29.50.