Gasoline RBOB futures closes Friday above 40 cents from the price on July 1st which was $2.70 and even reached a high of $3.15 on July 12, without any major news like 5 refiners exploding, a major hurricane demolishing energy infrastructure, or supplies being really scarce.

It isn`t due to real demand as gasoline supplies are actually 221 million barrels in storage versus last year when they were 207 million barrels. And to further point out the absurdity in the gasoline market, RBOB futures prices were $2.71 a year ago at this time. So we have more supplies and higher prices from a year ago. Shoot just a couple of days ago RBOB Futures were $2.86. These moves are ridiculous, and they might make sense if Israel attacked Iran, Unemployment was 2% overnight, the US was using more gasoline than usual by a factor of 10, or there was a shortage of oil.
Further Reading: Gold Sitting at Ledge of 2-Year Support Cliff 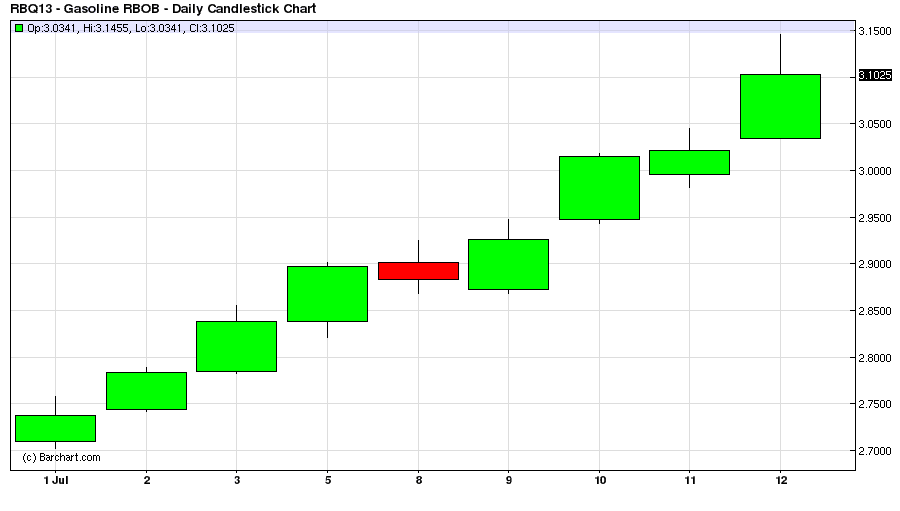 None of these things have occurred and the real ramp in gasoline prices which are going to hit the pump this weekend to the shock of consumers is pure speculators pushing the prices up in paper markets where nobody actually takes delivery of said products. Less than 1% of all energy paper market transactions are ever physically delivered to buyers, and unfortunately for consumers the prices in the physical market are set by the paper/electronic futures markets.
Further Reading: The Stock Market is a Giant Ponzi Scheme
So regardless if JP Morgan has no intention of actually taking physical delivery of gasoline, i.e., they have no use for it as a bank/hedge fund, and as their earning`s point out they make a whole lot of money from running up the paper markets, consumers get stuck with the bill of higher prices at the pump.
Price Gouging: Artificial Prices
How do you know these prices are artificial? Easy, do you honestly think there was a massive run on gasoline during the last two weeks? Just look at supply levels versus last year! Look at prices versus last year. It is all a scam by the players involved. Another reason you know prices are artificial is because if the president merely discussed that he was going to release the SPRs to counter higher oil prices, gasoline prices in the RBOB futures market would drop 45 cents in 3 days. If it was true market forces prices would stay high, or only moderate slightly after the threat or release of the SPRs. 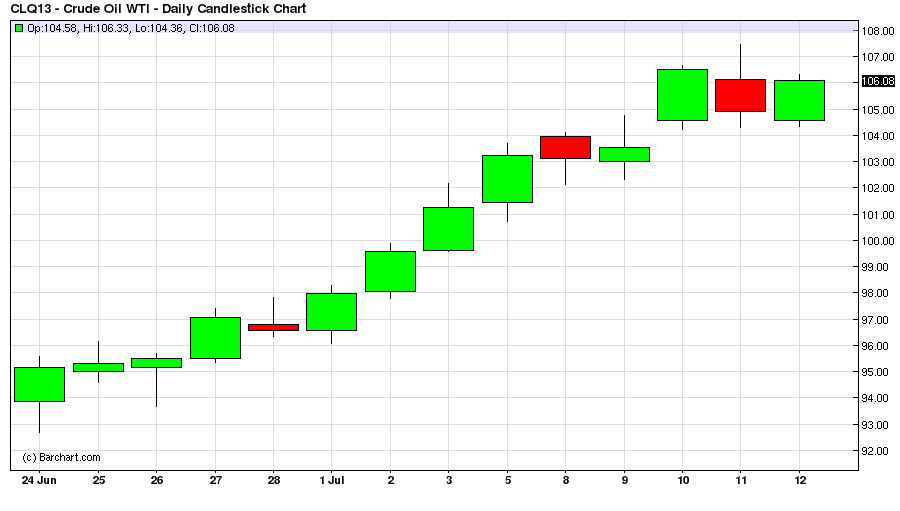 How do we know because the very thing happened last year, which by the way was an election year, and the president thought that higher gasoline prices would be harmful to his campaign so he made the threat, and prices dropped like a rock last summer. He didn`t have to actually release any supplies, just the threat made energy prices drop like a rock, i.e., oil dropped over $25 a barrel last summer.
There wasn’t true demand last year, and there sure isn`t true demand this year. Americans basically have been using less gasoline, and trending down the last five years as we are a mature gasoline consuming market with higher fuel efficiency standards, newer vehicles replacing old vehicles, and prices have been relatively high despite the weak economy, so consumers have started using fuel more efficiently, i.e., one large trip to the mall or store versus 5 smaller trips.
Further Reading: Lumber Prices near the Top of their Historical Range

Price Gouging: I Guess It Was All About the Election

Frankly the president to be consistent (if this wasn’t a political ploy for votes last year like most critics stated at the time) needs to threaten the release of the SPRs next week if he gives a damn about the struggling middle class in this country. The last thing poor people, citizens on fixed incomes, or just economic growth in general for a 1.8% GDP growth rate economy needs is a 45 cent per gallon tax increase in two weeks.

The fact that a business through the help of the speculators, without any market supply disruptions can get away with this activity ought to be criminal. The general public should be outraged! This is like gouging consumers for batteries and generators during a hurricane, and we have laws against this activity. But yet this crap goes on all the time in the gasoline and oil markets.
Further Reading: Is Inflation really a Problem?
Price Gouging: The Reason SPRs Work Is Because It Is All Manipulation to Begin with…
I realize the SPRs weren`t meant to be used to control speculators but it sure works, and has for the last three years. Every time prices spike the president either threatens or actually release the SPRs, and like magic the speculative cockroaches run for the hills, and in the end nobody really wanted the gasoline and oil after all, even at much reduced prices.

Price Gouging: A Rigged Market Requires Governmental Oversight
The oil industry is a monopoly, and consumers rely on the product to go to work, so without government intervention in a rigged market built around speculators with a high utilization of carry trades and QE funds at their disposal, we get a 45 cent price hike in 10 trading days without any supply disruptions.

Price Gouging: Take Physical Delivery, Then We Have a Legitimate True Energy Market

There are two solutions: Make everybody who buys or sells a futures contract take or provide delivery, and prices would drop by 50% easily, or when speculation gets out of hand use the SPRs to say enough is enough of this ridiculous price gouging as this is hurting consumers and our economy. So where are you Mr. President Obama? This is where leadership steps up to the plate, not just during election years.