ValueWalk
Home Business Why Chinese GDP is Likely to Come in at Around 6.7 Percent
By EconMatters China releases 2nd quarter GDP data Sunday night in US time zones and it is going to be ugly based upon all the second quarter econ data we have received throughout these three months. The trend is going south fast, and as bad as the second quarter GDP figures are the third quarter Chinese GDP will be even worse because of the effects of tightening measures to try to get a handle on the shadow banking sector.

Why Chinese GDP Will Likely be 6.7 Percent

The Chinese GDP number should be in the 6.7% range for the quarter, yes even with China massaging the numbers like a General Electric Company (NYSE:GE) accountant under Jack Welch, anything in the 7% is just flat out an invalid number based upon the economic number coming out of China the last six months. So Chinese GDP either gives a credible number and the market tanks for anything industrial commodity related, or they make up such a patently false number, and lose all credibility, leading to suspicions that things are so bad that they have to blatantly fix the numbers which don`t even remotely match the econ data. 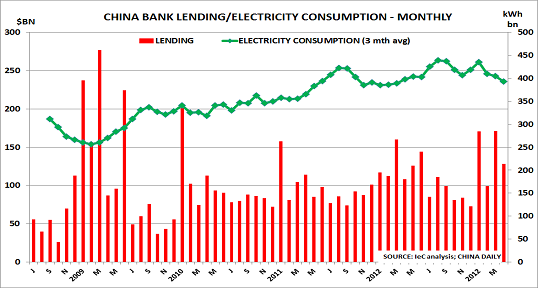 The market will tank under this scenario as well. This is the black swan, Europe is bad, but emerging markets are imploding and Sunday night market participants are finally going to take notice that they can no longer ignore the China bubble collapsing due to excessive lending of the last ten years that is finally coming to roost.

Further Reading: So David Einhorn is the Dumb Money on Apple

Copper has been moved back up to $3.19 a pound, it is an easy short back to the $3 a pound level by Sunday night through Monday morning. Oil will get creamed as well as of this writing oil is sitting just above the next level of support with WTI set to break the $104, $102, and $100 levels next week as stops get hit in mass exodus on the way down, and the shorts pile in after each technical level breaks. Gold and Silver have been getting slammed after bad Chinese data the past several months and it will be interesting to see if the pattern continues after the sharks have covered their shorts.

Further Reading: Apple Price Target: $50 Stock By 2016
If we get a 6.7% number for Chinese GDP even the safest of asset classes’ equities will get hit as Europe will sell off bringing down the US equities market as well. All in all, traders are going to see a lot of red on their screens next week as bad Chinese GDP data sets the tone for the week. Throw in some bad earning`s reports, and things could get real nasty after the run-up of the past two weeks in most asset classes.
Be advised the smart thing to do is to get out of harms way on Friday before the carnage begins next week. Markets have had a nice run, assets are overbought, move to cash, book some profits, protect your capital, and wait for the selling to exhaust itself if you’re a long only participant. Is rest assured once the selling begins next week, everyone will be trying to exit at the same time. If you want to stay long, at least buy some protective puts for your portfolio to hedge any selling if major funds start liquidating positions because they know they can buy back in much cheaper.
But the market has been worried about US tapering which is the least of their worries, it doesn’t matter a hill of beans whether the Fed buys $65 or $85 billion a month in Treasuries. But China’s considerable slowdown is what the market should be worried about, especially anything related to industrial from Caterpillar Inc. (NYSE:CAT) to Oil and Copper and the other industrial metals because everything is inter-related from Iron-Ore in Australia and Brazil, to the mining companies in Europe, to global demand for commodities like Oil and Copper.
Remember when all the talk regarding these investment themes referenced China`s incredible growth engine for supporting hefty prices, well now the counter argument applies, and now the hefty premiums for some of these industrial commodities like Oil and Copper need to reflect the facts that instead of China growing at 13% it is now growing even by dubious government numbers in the 6-7% range at best and trending in the wrong direction.

Copper should probably be trading below $2.50 a pound for example, and Brent and WTI both under $90 a barrel. Especially if you consider Chinese GDP slows growth by over 7% in the last two years. Yes the Commodity Super Cycle is over folks. QE has held these two commodities up for as long as they possibly could, but China is the prime factor regarding taking major demand for these commodities out of the market. It only a matter of time before these two commodities start to get attacked by the shorts like Iron-ore prices, and my guess is Sunday night with China`s release of GDP with a number in the 6.7% range gets their attention real quick!