Markets & Manipulation: A long History
Most markets these days are manipulated to some extent, and this is nothing new if we look back through the history of financial markets. But there are some strange things happening right now in the oil market worth mentioning.
Brent-WTI Spread/Scam
Another scam in the Oil market is the Brent-WTI spread this has been one of the biggest scams over the years in the Oil market. Just to provide some data to the absurdity which is this much hyped about nonsensical spread Cushing Oklahoma has 49.7 million barrels in storage, it had 45.1 million barrels in storage a year ago.  Cushing had 50 million barrels in storage at the start of the year. Moreover, in June Cushing will be adding additional supplies to storage due to current pipeline capacity going offline. So for all this talk about pipelines finally unlocking all the glut of oil supplies from the Cushing hub, and this being the reason for the impressive reduction in the Brent-WTI spread it is just a bunch of nonsense.
Cushing Oklahoma Supply Glut
So there is basically more oil trapped in Cushing Oklahoma then there has ever been when the spread was 25! So regardless if the spread is 25 or 8 it has very little to do with supplies residing in Cushing Oklahoma that is quite evident. Now there are a bunch of factors contributing to the nuances of the spread which I will not go into detail here but the takeaway is just to point out the absurdity which is the false and misleading rhetoric that encompasses this spread and Cushing Inventory levels. 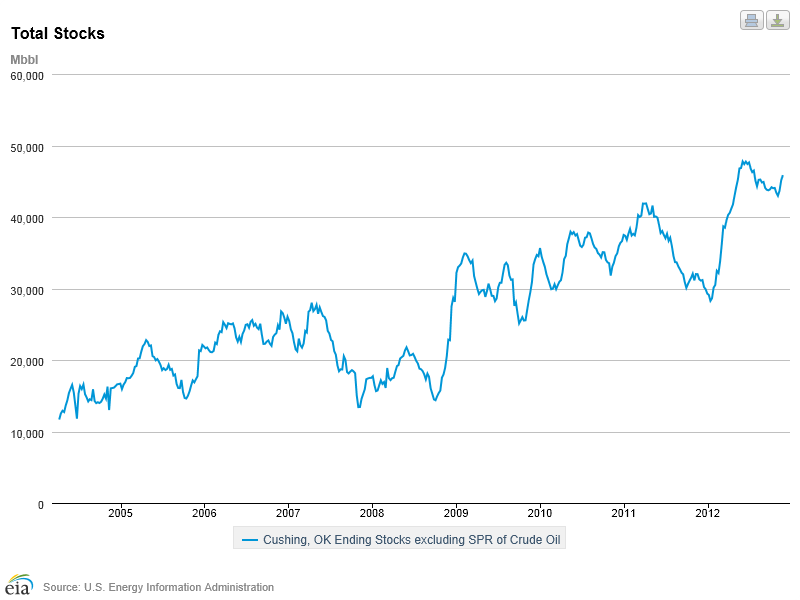 400 Million Barrels & Climbing
While we are talking about inventory levels it is funny that WTI sits at $97 a barrel when the entire year we have had basically 3 minuscule draws in inventory supplies which stand at a record breaking 395 Million Barrels in storage. So the Dow keeps hitting new highs every week, and the US keeps setting new modern records for Oil in storage each week.

Weak Demand in an Artificial Economy
But it is not just the supply issues in an obviously oversupplied oil market with the US domestic production being the biggest culprit. The demand side of the equation has been equally bearish for the fundamentals with China`s actual economy slowing over the past 2 years, Europe being stuck in a perpetual recession, and the US being a mature market with higher fuel standards and a stagnant economy that requires $85 Billion of stimulus each month to keep from cratering. The demand side had been very underwhelming from the products side of the equation. For example, Gasoline supplies in the northeast are 10% higher than normal for this time of year.

Strong Dollar Bearish for Dollar Denominated Commodities
Finally the strong dollar is supposed to be bearish for commodities and oil, and with the US Dollar Index hovering around 84 and threatening to strengthen from these levels it is a wonder that the Oil market has barely noticed this strange occurrence in Dollar strength, unlike the Gold and Silver Markets.
Fundamentals: Are we talking about the Fundamentals Again?
The takeaway is that none of the actual fundamentals ever matter in the Oil markets. When you have a house style advantage that would make any Las Vegas Casino envious the fundamentals play little part in a manipulated Oil market. It is all about protecting the huge supply chain that is the oil market and everybody`s livelihood. When in doubt follow the money trail, and money is the biggest reason oil prices are where they are currently despite the bearish fundamentals of the commodity. Oil prices wouldn`t be at these levels if the powerful manipulators of the commodity were not making a whole lot of money as a result. 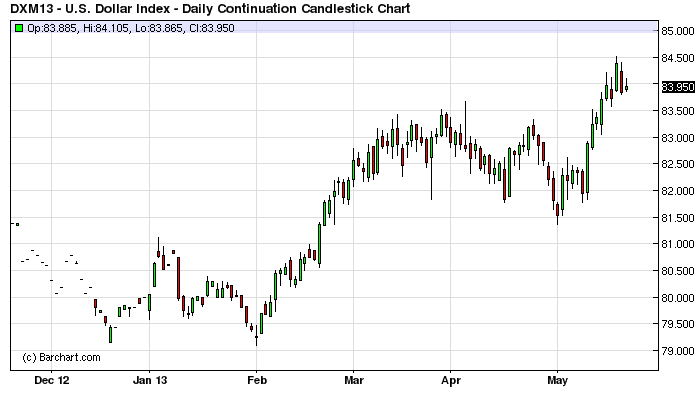 Oil Analysts Clueless
So the next time some Oil analyst tells you some hard studied reason why Oil prices are up it is all nonsense. Oil prices are up or down depending upon what the powerful players want oil to do, one week it can be at $86, the next $97, or $77, it is all about the money to these players, and they will do whatever it takes to make the money. And if it means being very creative with their methods then so be it, it is not like this is a regulated market!