The art of contrary thinking consists in training your mind to ruminate in directions opposite to general public opinions; and to weigh your conclusions in the light of current events and current manifestations of human behavior.

The purpose of contrary opinions is to avoid the predictions that go wrong, notably in the stock market.

It is axiomatic if you stop to think about it, that when everyone is bearish, or bullish, the first of the price momentum is broken.

Be a nonconformist when using your mind; when everyone thinks alike, everybody is likely to be wrong.  Imitation and contagion are the two culprits most responsible of conformity and sameness of thinking. Preconceived opinions leave little room in our minds for contrary viewpoints. –H. Neill, The Ruminator

Here is what CRM does:

Charlie Munger once said, “A thing not worth doing is not worth doing well.” When I look at Salesforce, I immediately see that it is not worth much time analyzing except if you wanted to go short perhaps. The company seems grossly overpriced. But let’s quickly go through the numbers. I also use ORACLE as comparison–ORCL and CRMValue-Lines. 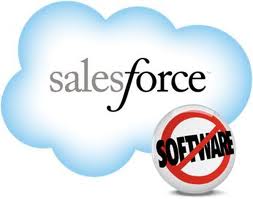 $169 CAGR 10% for 10 years = $438.  So CRM would have to grow 20% per year at least and then obtain industry leading profit margins even though it has yet to show a profit after 11 years in its quest to build market share.   I was curious if management would bother to tell shareholders when profits may be expected to arrive so I downloaded the annual report:CRM 2012 Annual Report, but the one page letter was just a cheering session. An F for shareholder disclosure.

The main reason I would pass is the difficulty to even maintain a high growth rate in terms of profits. If CRM is not a franchise (able to earn above average profits on each dollar of sales above its cost of capital) then growth doesn’t matter. However, growth is extremely difficult over ten years beyond 15% each year as this article describes: http://money.cnn.com/magazines/fortune/fortune_archive/2001/02/05/296141/index.htm

That’s the problem for big companies: The growing gets hard, and we have two studies to prove it. The first was done a few years ago by Wharton School professor Jeremy Siegel for his book Stocks for the Long Run. Siegel’s primary purpose was to examine how the Nifty Fifty of 1972 would have treated investors who paid the sky-high prices then being asked for them and held on for 25 years–and the answer was “not badly.” But a secondary part of the study looked at the group’s annual growth rates in earnings per share. And only three companies out of the 50 beat 15%. They were Philip Morris, at 17.9%; McDonald’s, at 17.5%; and Merck, at 15.1%.

The second study is one FORTUNE, working with Value Line, did for this article. For three different periods–1960-80, 1970-90, and 1980-99–we examined earnings-per-share growth for 150 large companies. In our sample were the 150 publicly owned companies that (a) at the start of each period were the biggest in the FORTUNE 500 or were in the very top of the “Fifties” lists that we used to do for certain industries, such as commercial banks; and (b) were still independent beings at the end of the period being studied. The fact that we threw out any company that did not last the period (because it was acquired, perhaps, or subjected to a leveraged buyout) gives the results an upward, “survivorship” bias. Beyond that, we know retrospectively that there was no shortage of business opportunity in the years we studied: Though the companies looked big to the world as each period began, they still had plenty of room to grow.

And yet the number that managed to increase their earnings per share over the periods by 15% annually was very small, even when you include the companies that hit the mark because of an oddball situation. For example, Boeing beat 15% in two periods (1960-80 and 1970-90) because it moved from hard times in the base years to prosperity in the later years. Similarly, Fannie Mae had an extraordinary 32% growth rate for the 1980-99 years because it began the period in a near-bankrupt condition, brought on by sky-high interest rates, and later got rich.

Below are several comments from investors who are skeptical of CRM’s valuation:

I’m short the stock, so perhaps am biased, but have tried to do the same blue-sky valuation analysis you have done above. I believe there are a few places where your assumptions are off.

In the essence, it is impossible for Salesforce to lower its R&D or Marketing and Sales (“M&S”) expenditures to levels similar to Oracle or SAP. If you think about the value proposition of CRM, this includes a lower TOC for users. If that is true, then that means lower revenues per customer, and a higher cost per unit of revenue to deliver the goods. Thus, CRM will never be able to do operating profits close to that earned by SAP or ORCL.

There is also the more sinister argument that the firm will do anything to show the Street growth in revenues and deferred revenue, and given that the market seems to be giving them a free pass for now on profitability, they are out there spending several dollars in costs (on their marketers) just to generate one dollar of sales.

For what it’s worth, I see them at $6.6 billion of revenues in Fiscal 2018 (still astounding growth) but they will struggle to do markedly better pro-forma operating margins than they are already doing now (and GAAP margins will still only be in the low single digits). Even in a blue-sky scenario, where they could approach $9 billion in sales that year, and generate 15% pro-forma operating margins, I still only get to a shade over $4 in EPS (and that’s five years away). Generating $9 billion in a single year would be quite a feat by the way: in the past three full fiscal years, they’ve only generated $8.1 billion, in total.

But let’s say that the blue-sky will prevail and that investors will pay 35x that blue-sky EPS number five years from now, that gets you to a future value of about $150/share. Given the corporate governance issues, the exorbitant insider compensation, the acquisitive growth, and the legion of current fans on the sell-side, there is a lot of risk between here and there, so I’d need to earn at least 12% a year on an investment that I thought was going to be worth $150 five years from now. That gets me to $85 today, and again this is in the rosiest of scenarios – and one which I think is extremely unlikely.

I agree by the way that there seems to be scope for the company to play games with revenue recognition. The disclosure in the 10-K regarding their policy is labryrinth of verbosity.

Finally, management is voting with their feet–a continuous sale of their stock.  CRM seems like a transfer scheme between public investors and management. Investors buy and management sells.