The gasoline market is well supplied, but if it weren`t for gasoline exports, the united states would have much cheaper gasoline, and the economy would reap the benefits of cheaper inputs which would fuel greater growth in the US. For example, I imagine college students, truck drivers and small business owners would be much more profitable paying a dollar less per gallon for gas over a year`s time.
Q1 2021 13F Round-Up: Notable Hedge Fund Changes

Gulf Coast Refiners
The refiners along the gulf coast have a strategic advantage in using the WTI oil input price, making refined products, and then selling them based upon globally benchmarked Brent Oil inputs. So quite the incentive to export as much refined products as possible with these attractive margins. 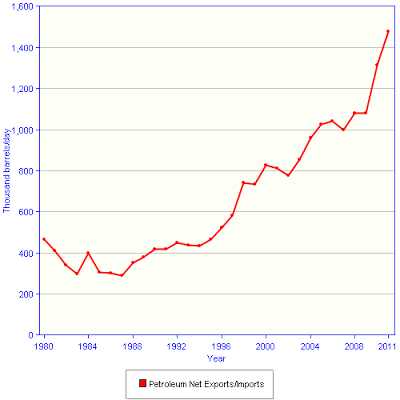 Consumers vs. Corporations
As with most transactions there are winners and losers, and US consumers are the big loser while refiners and the corporations that own them are the big winners. In short, the US consumer is subsidizing the refiners’ profit margins.
LNG Export Debate
It is ironic that another industry the Petrochemical Industry is lobbying heavily against LNG exports, saying that they could contribute to raising natural gas prices, which they use as a feedstock, and this would hurt their profitability and operating margins.
Dow Chemical Company has been a vocal critic of ramping up LNG exports, and Exxon Corporation has been on the other side of this issue. Exxon would benefit from higher natural gas prices due to their increased presence in natural gas over the last decade, and Dow Chemical who has moved operations to the US to take advantage of cheaper input costs would be hurt by rising natural gas prices.
Consumers Need Voice in Washington
I guess it is too bad consumers don`t have a large advocate group in Washington looking out for their interests when it comes to gasoline exports unlike the powerful fortune 500 companies. It is obvious that congressional loyalties go to the powerful lobbyist groups representing large highly profitable corporations, and not to consumers who elect these individuals into office.
When in doubt always follow the money, and US consumers are not organized on issues that affect them, and they lack the money to influence politicians on issues that affect their bottom line.
Salt in the Wound
If that wasn`t depressing enough for US consumers, here is a little salt to rub into that wound. If the US wasn`t exporting so much gasoline and refined products it is obvious that given the lack of demand, the abundance of oil, the sizable refining capacity, and the need to generate revenue, gasoline and refined products would be much cheaper in the US. If you don`t believe me, ask the experts in The Dow Chemical Company (NYSE: DOW) why they are fighting LNG exports so vigorously? 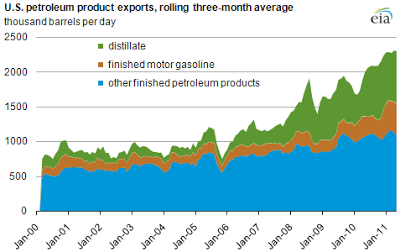 Venezuelan Subsidies
Here is the salt, Venezuela whose government under President Hugo Chávez subsidizes gasoline for their citizens, so Venezuelans pay in the neighborhood of 18 cents a gallon, and much of this gasoline comes from the US in the form of exports. For example, U.S. exports of gasoline to Venezuela climbed to a record high of 85,000 barrels a day in November of 2012, and total petroleum products are well over 200,000 barrels per day of refined products being imported from US refinery operators.
No Incentives
Ergo, the US has a tighter than otherwise refined products market due to increased exports to countries like Venezuela, so US citizens pay higher prices for the illusion of a tighter end products market, and Venezuelans who have no incentive to use fuel efficiently due to below market subsidies, demand more and more exports from the US, raising fuel costs on US consumers, while they pay ridiculously low consumption prices.
What do US Consumers get out of Exporting Gasoline to South America?
Furthermore, Venezuela is a country with leadership via Chavez who routinely bad mouths the US, and nationalized the entire Oil industry in Venezuela, and has neglected to properly upgrade their oil and refining infrastructure.
Why should US citizens be subsidizing big oil refiners, and in the process subsidizing Chavez`s inefficient use of energy, when these resources could be better used at home.
Let Chavez procure all his refined products from China, it would raise his costs enormously, and he would have to modernize his oil operations thus boosting efficiencies, given the higher costs of importing refined products from China.
What`s in it for the US, besides higher profits for US refiners? It isn`t good for US consumers, or our political interests in the region. The sooner the Chavez regime is forced by market forces to embrace capitalistic ideas the faster the economy in Venezuela starts to use energy more responsibly and efficiently.
In fact, if Venezuela had their act together given their cheap input oil cost structure, provided they upgrade their infrastructure, the US should be importing gasoline and refined products from Venezuela at much lower costs than products cost today. The Adam Smith argument for maximizing global economic goods and services through country specific efficiencies and scale is underlying my assertion here. 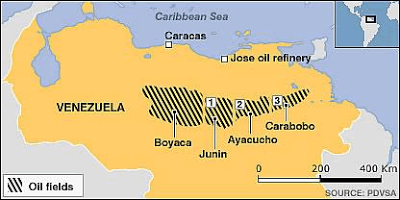 Exports shouldn`t sacrifice US Consumers in the process
I am all for exporting, but not at the expense of our own citizens, and not for the purpose of subsidizing inefficient uses of energy, and governmental policies worse than our own, and we are pretty bad on a lot of governmental policy fronts.
The US should be encouraging Venezuela which is sitting on the second largest supply of proven oil reserves, to enable free market forces to come in and maximize those resources, so the world can benefit from cheaper energy.
The last thing the US should be doing is helping subsidize Venezuelan socialism through cheaper refined products at the expense of US citizens than they could otherwise get from China or other parts of the globe. It’s just bad policy all the way around unless you’re a US refinery along the gulf coast! 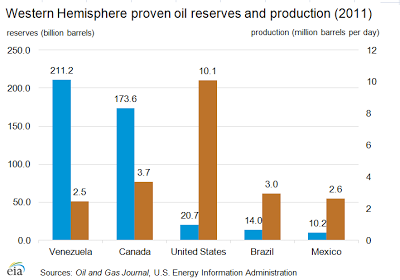 Yes, 18 Cents a Gallon
The next time your filling up at the pump for $4 a gallon just take solace in the fact that Venezuelans are paying 18 cents a gallon, too bad Dow Chemical hasn`t represented your interests on this issue in the past!