Consumers only focus on Inflation, they ignore deflation areas

It seems that to exclusively focus on one side of the equation can be human nature at times, and with regard to inflation concerns humans never see the other side of the equation, i.e., areas where they are actually experiencing deflation in their lives.
The Housing Market
Let`s start with housing, the Case-Shiller 20-City Home Price Index shows quite clearly that after years of inflation, consumers are getting a large break on prices due to the deflationary effects in the housing industry over the last five years. 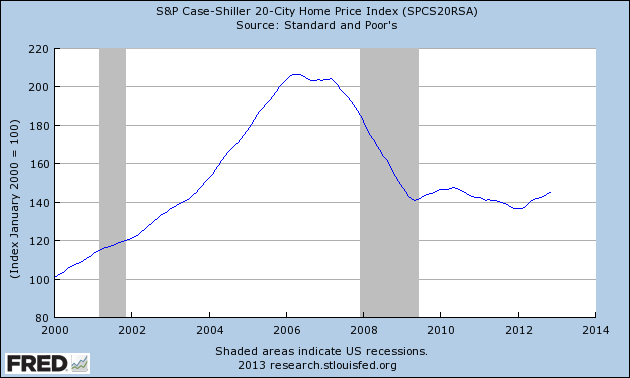 Mortgage & Interest Rates
How about interest rates, rates for getting financing either to finance a first purchase or refinance an existing loan have been a real boon to consumers, and rates generally have been coming down for twenty years. I am sure your parents or grandparents can tell stories of 18% mortgages; we are definitely experiencing deflation in financing costs around borrowing money. 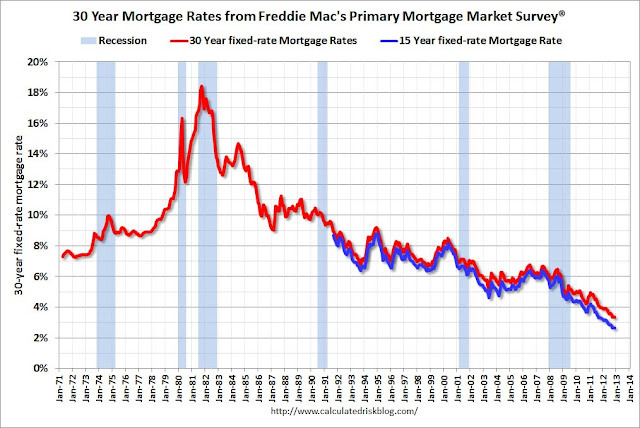 Copper Prices
Next let us look at Copper prices for the last five years down over 2%, and that is after a price spike for the first quarter, wait for the first major selloff in markets and copper will be much cheaper, i.e., Copper prices can easily sell off 30 cents or more per pound when assets sell off over the annual summer selloff.
The first quarter the last three years has been good for asset prices, but it is important to take the yearly average in prices to smooth out the fund inflow noise that look to make a quick buck on the first quarter ramp up in investment flows.
But again Copper is a major component used for industrial & commercial economic projects and an inflation hedge, and it is exhibiting deflationary effects the last five years, especially when you factor in ‘real terms’ it is even more deflationary.
Natural Gas Prices
Let us next take Natural Gas prices down over 40%  for the last ten years, but consumers don`t want to factor the areas where they are doing much better in regards to the “pernicious effects” of inflation.
Yes Natural Gas prices are another major economic input cost for many manufactured products from plastics to chemicals, and this major economic input commodity is in a major deflationary cycle.
Gasoline Prices
Now let us take everyone`s poster child for inflation gasoline prices; over the last five year`s they are up 20%, but this is misleading as we are at the highest point ever for this time of year, and gasoline like oil prices are quite volatile.
For example, they were down 10% over a five year period in June of 2012, so again it is important to take the yearly average in gasoline and oil products.
But even one of the worst categories for inflation, at the height of a recent influx of capital, is only averaging 4% annual inflation.
Plus there are other factors at work here including the newly minted exporting of gasoline and petroleum products that has occurred as a trend the last three years in these markets that are making these numbers worse than they otherwise would be.
Just be patient folks gasoline prices will come down as high prices are actually deflationary for the product, and the old adage applies, there is no better cure for high prices than high prices for economic sensitive goods.
Expect a pullback in gasoline prices for the second half of the year, and when we revisit these numbers I can envision a negative print for gasoline prices over the last five years.
Electronics have built in Deflationary Cycles
But we haven`t even gotten into electronics, televisions, computers, cell phones etc. there are many other areas which continually have deflationary product cycles that help cancel out the areas where we do have inflation effects, and even some areas that are indeed “pernicious”!
I am not saying there is no inflation, clearly even the government numbers show over a 2% annual inflation rate. But the exercise is meant to show that there are major deflationary pressures still at work in our economy, and they are worth taking notice of to balance some of the inflation rhetoric that seems built into our psyches.
Wholesalers Probably Take Advantage of Inflation Fears
I think a lot of wholesalers, middlemen, retailers, etc. actually fatten margins because consumers believe inherently in the “pervasiveness” and “perniciousness” of inflation; why not tap into this and confirm their worst fears, and gain some pricing power along the way.
The input costs that I have presented over these two articles are actually quite deflationary, and I can keep going as there are so many examples of deflationary price pressures in many commodities.
The fact that I can easily find so many examples should in itself say something regarding the inflationary environment in the economy. I literally just started pulling up charts and indexes, and was not cherry picking for results.
Sure I can find many areas that are inflationary, but if inflation was really as “Pernicious” and “Pervasive” as everyone seems to believe these days, I shouldn`t be able to find so many counterexamples to their argument so effortlessly.