Everyone is currently worried about inflation with the central banks printing like there is no tomorrow. But the actual inflation numbers are much less than people think inflation is in their everyday lives.
For example, Let`s look at Cocoa prices, literally at the bottom of their five year range at 2,227 per ton, well below the 3,800 per ton level established in March of 2011. 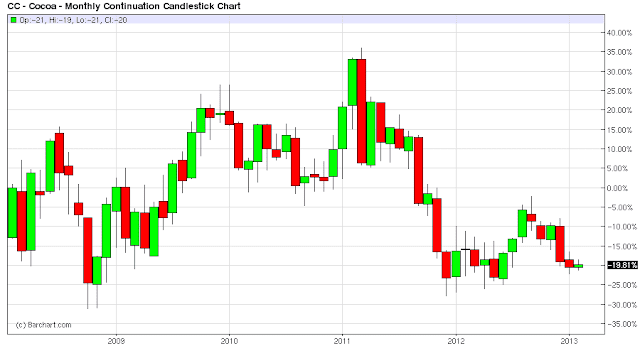 Rough Rice Prices & Inflation
If we take Rough Rice which closed at $16.34 per cwt. it is well below the highs of $22.65 and $19.02 per cwt. established in April 2008 and September 2011 respectively. Sure there is a general trend higher in Rough Rice if we go back to 2003, but how actively traded was the instrument back then from an overall investment standpoint? However, the bigger picture of the last five years shows no real signs of inflation for a major food staple in the world`s diet. 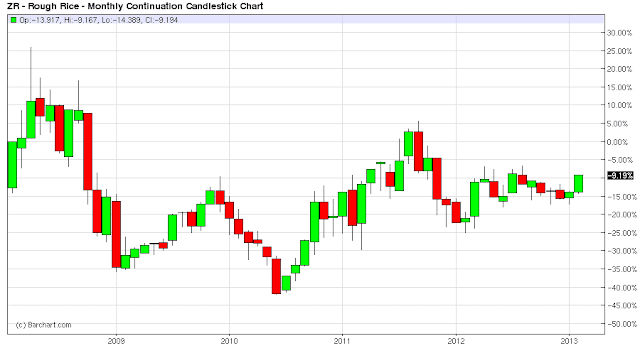 Wheat Prices & Inflation
If we look at Wheat prices which closed at 756 cents per bushel or $7.56 per bushel these prices are also well below the highs of $13.00 per bushel and $9.65 per bushel established in February 2008 and April 2011 respectively. Again Wheat prices are much higher than 2003, but markets were so much smaller back then from a global and fund perspective. 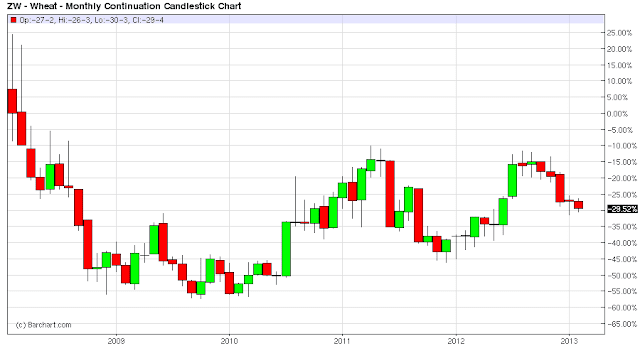 There are just a lot of investment dynamics that modern markets with ETFs opening up additional investment options, and electronic markets allowing for greater participation levels, plus the natural progression of inflation of assets over time that play a large role in these elevated prices during a 10-year time span.
However, it should be noted that despite the price spikes, and inflation fears in the media and the investment community, Wheat prices for the most part have been pretty stable the last five years. Not exactly runaway inflation for a mass consumed food staple!
Emerging Markets & Inflation
There is no doubt that there is food inflation in emerging markets with some of the cause due to central banks exporting some inflation pressures, but most of the food inflation these countries experience is due to inefficient food supply chain issues, and poor governmental policies regarding currencies and financial market structural issues.
Of course population factors in many of the emerging economies add their own set of price pressures as well. But these issues are nothing new and not a direct result of central bank monetary policies in the developed world for the most part.
Higher Spending Levels & Inflation
In conclusion, for there to be runaway inflation in the developed economies that everyone fears right now it is going to take much more spending pressures by consumers along the entire supply chain of goods and services needed for everyday living. Not just a couple of areas like Healthcare or Education which exhibit definite higher inflation trends, and are actually mainly the result of government, corporate and insurance related subsidy issues.
Fed Injected Liquidity Chases Stocks & Bonds Not New Clothes
There just isn`t the demand needed to push up spending levels to the point necessary for more capital chasing fewer and fewer goods and services. It is still skewed in the opposite direction, despite all the increase in monetary capital, but this capital isn`t chasing essential goods and services in the economy.
The loose monetary capital is meant to fill the void and help offset the lack of actual consumer spending in the economy, and the nasty effects of the deflationary, deleveraging process. The one area where we experience inflation due to the central banks is in more capital chasing fewer investment opportunities, and thus prices rise in stocks and bonds as a result during this loose monetary policy period.
But consumers are not so well off, or flush with cash, that they are massively consuming at the levels needed to cause major inflation pressures in the goods and services area of the economy.
The Wealth Effect & Spending
The wealth effect will even be less than policy makers would like because not everyone is invested in 401k`s in the stock market, and investors don`t feel comfortable enough with their retirement levels to start cashing out major amounts, and putting this new found wealth back into the economy. Shoot investors are just now back to the level they were five and ten years ago.
In addition, the problem is not all assets can be reflated as many companies have gone out of business with the tech and financial market collapses, that investment capital is forever lost, and completely deflationary in nature. You can`t get back to even if you were completely wiped out in an invested company, or you were wiped out so bad, that you pulled your money from the market.
Other examples are small businesses that went bankrupt and lost all their built up equity in the business, or homeowners who lost their homes and all the money they invested over the years of home ownership. If you bought at the top of the housing market you are also caught in the deflationary trap.
That is what makes re-pricing in assets such a nasty process, and very deflationary in nature. There is so much personal wealth that is forever lost, and nothing central banks do from a monetary perspective can ever bring this wealth back into circulation chasing goods and services in the economy.
Banks have recapitalized their balance sheets; Consumers still have a long way to go!
Banks and financial institutions have enjoyed the fruits of the asset recapitalization in markets far greater than actual retail investors participating in financial markets over the last 10 years. Maybe if the Dow goes to 25,000 new investors will all be rich and pull this money and put it to use buying goods and services in the economy.
But there just aren`t enough actual consumers of overall goods and services who are doing so well in their personal finances given that wages have been stagnant for seven years to increase the spending part of the curve so that there is more capital chasing fewer goods.
The Underemployed & Unemployed Not Flush with Cash to Spend=Deflationary Pressures
As I said earlier, it is still a buyer`s market, i.e., please buy the goods and services that we bring to the market. With the high number of the total unemployed or underemployed still putting substantial deflationary pressures on the demand for goods and services in the economy because they lack the financial resources we have a while to go before runaway inflation rears its unmanageable head in the developed economies of the world.