With China slowing down, and a recessionary GDP projection (below 3%) for the developed world in the next two years or so, many analysts are also projecting far less bullish commodity prices.  Due to the very limited export capacity, the price outlook of the land-locked U.S. natural gas (Henry Hub) is even gloomier without the cushion of more robust demand from emerging nations.

After hitting a decade low of $1.90/mmbtu last April, Henry Hub (HH) natural gas price has managed to climb almost 80% to $3.398 on Jan. 14.  Unfortunately, the same factors tanking natural gas to below $2.00 — increasing production from unconventional sources via new technologies such as horizontal drilling and fracking, mild weather, weak domestic demand and economic environment – are still alive and well. 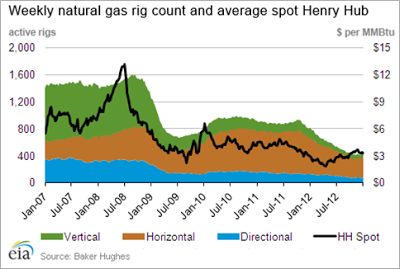 Production has been rising despite a 46% drop of gas rig count during 2012 — According to Baker Hughes Incorporated (NYSE:BHI), the natural gas rig count was 434 as of January 11, 2012, vs. 811 at the start of 2012.  Natural gas working inventories already hit a record-high level in early November, and the EIA now expects natural gas consumption to stay relatively flat year-over-year in 2013 with continued production growth. 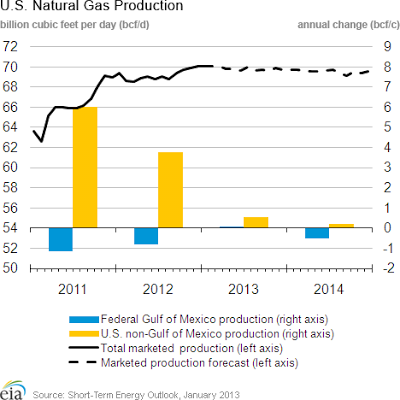 But low natural gas price is actually good news not only to the domestic chemical and manufacturing sectors, but also bring in more jobs as many foreign companies are considering moving operations to the U.S. to take advantage of the lower energy costs.

This has not escaped the attention of no other than the oil industry itself. Apache Corporation (NYSE:APA) just came out and said it has partnered with Halliburton Company (NYSE:HAL) and Schlumberger Limited. (NYSE:SLB) to find ways to use natural gas to power hydraulic fracturing. Caterpillar Inc. (NYSE:CAT) was able to develop dual-fuel kits that would allow the engines to run on diesel while idling and natural gas when they are pumping at high RPMs.  Reportedly, Schlumberger is testing a system using compressed natural gas (CNG), while Halliburton is using liquefied natural gas (LNG).

Frac is one of the most energy intensive processes in the oil industry.  According to Apache, only 1% of drilling rigs and zero full frac spreads are powered by gas.  In 2012, the industry will have used more than 700 million gal of diesel to pump sand and water during fracture stimulation. That’s $2.38 billion spent on diesel at a recent average of $3.40/gal.  Converting the process to using field gas would reduce fuel costs by 70% thus driving down the per barrel cost of oil.  Furthermore, by replacing diesel with gas to fuel frac jobs, the US would import 17 million fewer barrels of oil each year.

With some of the plays such as Marcellus profitable even at $2/mmbtu, it is no wonder that Fadel Gheit at Oppenheimer recently lamented that “natural gas prices will be dead for at least two more years.”  Even the commodity perma-bull Goldman Sachs had to lower its 2013 natural gas price target from $4.25/mmbtu, to $3.75.

In this price environment, a straight-forward natural gas investment such as the UNG or even producers would not be that good an idea unless you are in it for the long haul.  The better investment (and less volatile) prospect would be those service technology innovators like the ones mentioned here (Halliburton Company (NYSE:HAL), Schlumberger Limited. (NYSE:SLB), or equipment manufacturers like Caterpillar), since fossil fuels will not relinquish its lead in the end user sectors in the foreseeable future, and that oil companies have resorted to outsourcing technology development to service companies.

Where supply/demand forces might fall short, count on technology to bring the world into a new Oil [and Gas] Renaissance.