Even though the total employed jumped by 128,000, the jobless rate remained the same, primarily because the labor force increased by a larger 189,000.   That is not a good sign when the labor force is growing faster than job growth, as it suggests the unemployment rate could hit higher if the trend continues.  Out of the total unemployed, 41.9% or 5.4 million is trapped in the long-term unemployed category (jobless for 27 weeks and over), while growth in private payrolls was the weakest in 10 months.

The better news is that the jobless picture, while still gloomy, at least seems holding steady and not deteriorating.  The bad new is that don’t expect we can dig out of this unemployment hole any time soon either.

At an April 25 press conference, Fed Chairman Bernanke said about 100,000 a month job growth is needed just to stabilize the jobless rate, while 150,000 to 200,000 a month of new jobs are needed to reduce it.  The latest estimation from the CBO (Congressional Budget Office) implies that roughly 90,000 jobs a month is needed to keep up with the projected population growth–the underlying rate of labor force growth is now just 0.7% annually.

According to economist Carmen Reinhart, the post-crisis weak period usually lasts as long as the boom that preceded it. The U.S. housing boom lasted 7 years (prices doubled from 2000-2007), which means the job market will also remain unhealthy until 2016, 7 years after the Great Recession officially ended in June 2009.

The more sobering view comes from the Brookings Institution.  As of June, the U.S. faces a “jobs gap” of 11.3 million jobs since the start of the Great Recession in December 2007. Under the assumption of 208,000 new jobs per month, it will take until June 2020 – or eight years – to close the jobs gap.  At 321,000 jobs per month, the economy will reach pre-recession employment levels by August 2016.  (See Chart Below). 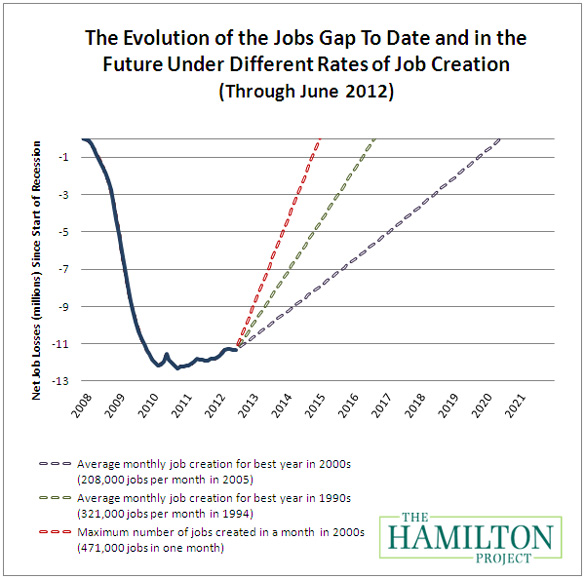 The reality is that regardless which estimate you go by, the current job creation trend still falls short–from April through June, the economy produced an average of just 75,000 jobs a month.

Furthermore, in addition to high national debt, the U.S. would have more than $600 billion in higher taxes and reductions in defense and other government programs starting in 2013 if the Congress fails to resolve the “financial cliff”.  Europe is facing its own “financial cliff” with sovereign debt crisis raging in several Euro countries, while China is also experiencing a significant slowdown, if not an outright recession.

With this high degree of global uncertainty, companies most likely will put off adding permanent positions, and maintain status-quo by either asking existing employees to work longer hours, or hire temporary workers to keep the business going.

The Great Recession and the poor job market in the past five years has stressed the middle class to the limit. The weakening economic outlook has partly prompted the Federal Reserve to expand its Operation Twist by $267 billion till the end of 2012.  Based on the recent language from the Fed, QE3 could be coming as well.  However, the seeds have long been sown from the poor fiscal and monetary policy implementation by the government.  The president’s 2009 stimulus program, and Fed’s two rounds of QE gone to either big banks or non-essential special purpose projects, and very little to where it’d matter in terms of job creation.

Right now, it looks like President Obama likely will get re-elected unless things start deteriorating fast and significantly (That’s more a poor reflection of the current viable presidential candidates, instead of an endorsement of the current Administration.)  So that means we probably should not expect much difference even with a QE3 or Obama stimulus 2.0 after five years into the black hole of jobless.