In their March 2012 paper, “Analyzing Valuation Measures: A Performance Horse-Race over the past 40 Years,” Wes Gray and Jack Vogel asked whether the business cycle should affect our choice of price ratio:

Gray and Vogel analyze the returns of different price ratios over economic expansions and contractions defined by the National Bureau of Economic Research. 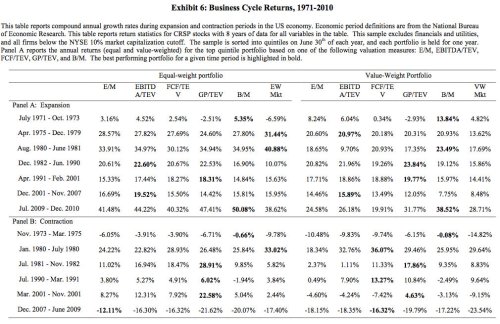 B/M enjoys periods of relative out-performance in the early ‘70s, early ‘80s, and in late 2009. The B/M performance pattern lends weak evidence to the hypothesis that balance-sheet-based value measures perform better than income or cash-flow statement value metrics when the economy generates more returns from tangible assets (e.g., property, plant, and equipment) relative to intangible assets (e.g., human capital, R&D, and brand equity). Overall, there is no strong evidence that a particular valuation metrics systematically outperform all other metrics during expanding economic periods.

[The] results in Panel B suggest there is no clear evidence that a particular value strategy systematically outperforms all other strategies in contracting economic periods. For example, during the July 1981 to November 1982 and March 2001 to November 2001 contractions GP/TEV shows strong outperformance, but this same metric has the worst performance in the December 2007 to June 2009 recession.

[There] is little evidence that a particular value strategy outperforms all other metrics during economic contractions and expansions. However, there is clear evidence that value strategies as a whole do outperform passive benchmarks in good times and in bad. The one exception to this rule is during the April 1975 to June 1981 business cycle, a time when a passive small-cap equity portfolio performed exceptionally well.