China’s inflation jumped to its highest in three years with consumer price index (CPI) surging 6.4% year-over-year in June (See Chart Below). The spike has been fueled by escalating food prices despite that the central bank’s effort to tame inflation by pushing up the RRR (Reserve Requirement Ratio) for commercial banks six times this year, while raising interest rates five times since September, most recently on July 6. 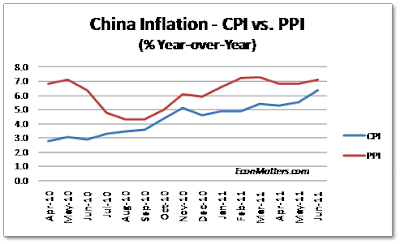 Food prices, which weight about 30% of the CPI basket, climbed 14.4% from a year earlier, and the price of pork, in particular, increased 57.1% year-on-year, and 11.4% month-on-month, is the engine behind the runaway consumer inflation train (See Chart), according to the figures released by the National Bureau of Statistics (NBS) and reported by China Daily.

The price of pork–a staple of the Chinese diet–hit a new high in June due to rising costs and short supply. One analyst based in China warned that price increases in pork, which accounted for 65% of China’s meat consumption, risked sending the costs of grains and vegetables up as consumers seek alternatives to meat.

Bloomberg reported that many investment banks and economists believe that the future direction of China’s CPI will still be mainly influenced by pork prices.

In addition to monetary policy, Beijing is also using other tools, such as sales of grain reserves, to cool prices. But rising food prices is a world-wide phenomenon with FAO food Price Index rising 39% year-over-year in June, according to the Food and Agriculture Organization of the UN.

So Beijing’s effort fell short, and the CPI now stood high above the government’s target of 4% for the year.

Meanwhile, China’s Producer Price Index (PPI), measuring inflation at the wholesale level, rose 7.1% year-on- year (See Chart Above) in June mostly due to production materials costs which was up almost 8% in June.

Many analysts, expecting Beijing’s “intervention” to take effect, have been predicting China inflation to peak each month for the last 9 months. The latest verdict is that the inflation probably peaked in June and will trend down in the second half of this year.

However, the wide differential between the two inflation measures–CPI and PPI (See Chart Above), would suggest increasing pressure to pass on the price increases to consumers most likely well into at least the first half of 2012.

On the other hand, if due to price control by the central government, producers and business are unable to pass through the cost increases, that could mean reduced production and profits for corporations, which is partly why China had to facesummer power shortage. Coal power plants in China cut run rates in protest as producers could not make ends meet amid soaring coal prices and the government-imposed price cap.

China’s expansionary monetary and fiscal policies since the Recession coupled with huge investment inflow into the real estate and other markets has not only exacerbated the pricing pressure, but also has also created overcapacity in some sectors.

The country has introduced a series of measures to curb rising property prices, while construction of 10 million government-subsidized homes is expected to start before the end of October. Price drop in the real estate sector could be in the second quarter of next year when a large amount of government-subsidized houses will flood the market.

China Daily quoted a research report by the National Institute of Property Finance and Beijing Beta Consulting Center that China’s first-tier cities will probably see a 30% fall in property prices. Second-tier cities could see drops of 10-20 % in coming months.

Urban fixed asset investment rose to 9.03 trillion yuan ($1.39 trillion) in the first five months, up 25.8% year-over-year (See Chart), while investment in residential housing reached 1.33 trillion yuan, up 37.8% from the same period last year. This has partly contributed to the current escalating inflation in China. 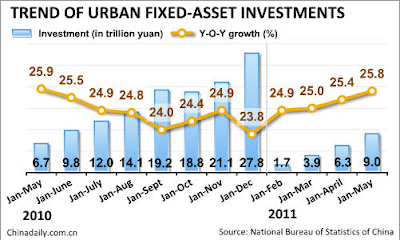 However, there’s no slowing down for construction any time soon even with current rampant inflation levels. Business China, in a June report, quoted an analyst from Northeast Securities that

“Affordable housing projects and high-speed trains ensure the “intensity” of China’s fixed asset investment… [this] will be around 20% per year in the 2011-2015 period, helping the nation’s construction machinery sector to realize its sales target of RMB 900 billion.”

“China’s construction machinery market is expected to grow by about 17% per year over the next 5 years…..citing the 12th five-year plan for the industry. According to the China Construction Machinery Association, the plan has been submitted to senior government departments and is expected to be issued before the end of this year.”

With the increasing bank tightening, many small businesses and companies are getting squeezed.  This news about fixed asset investment seems to suggest Beijing expects a mid-term weak domestic demand and possibly widening income gap that government “infrastructure stimulus” is the only reliable means to fuel growth, jobs and income.

Most likely Beijing is worried once it stops “intervention” and let the chips fall where they may, riots and revolution would ensue.

Nevertheless, China’s leaders pledged to give a greater priority to stabilizing prices in 2011 and better manage liquidity and also noted maintaining proper pricing levels is vital to the country’s stability and security.

So for now, depsite the recent revelation of a ticking bomb from high localgovernment debt, there’s no reason to think China would not come through eventually.  However, in light of many other social economic issues, the battle of inflation most likely will need to go far beyond controlling food and energy prices.  That means it will be an vertical battle climb that could last well into 2013 and beyond, much longer than most market players have anticipated.

Now, in the face of rising inflation, gold is the typical hedge.  But in the case of China, there are a few more options that could also stare down the inflation dragon.

For the ongoing construction boom and monetary tightening in China, listed domestic construction machinery companies like Sany Heavy Industry Co. Ltd (600031.SH) and Guangxi Liugong Machinery Co. Ltd. (000528.SZ) are cited as the most competent candidates for this big pot of government cash.

Metals such as copper, iron ore of which China is a big importer, producers like the World’s Big 3— BHP Billiton, Vale, Rio Tinto, and Cleveland-Cliffs, and Arcelor Mittal, etc. would also benefit from the steady high price supported by strong Chinese demand and the infrastructure build-out for the 2018 XXIII Olympic Winter Games at Pyeongchang, South Korea.

Some “status symbol” consumer goods companies like McDonald’s, Starbucks and luxury car maker like Audi and BMW seem to have better luck (than the coal power plants at least) passing through some of their costs. So companies in this niche sector could weather the coming monetary tightening in China better than some other sectors.
Red Hot Hogs

Another long idea came from Phupinder Gill, president of CME Group who told China Daily that