World crude oil market has been rocked by the surprise announcement of the International Energy Agency (IEA) to release 60 million barrels of oil from member countries’ strategic petroleum reserves (SPR). The US led the effort by chipping in 50% of the planned release, while Japan, Germany, France, Spain and Italy are providing most of the rest.

This kind of coordinated sale from the IEA has only occurred twice before on a supply emergency basis – 1991 Persian Gulf War, and Hurricane Katrina in 2005. This time around, the “supply emergency” cited was the disruption stemming from the conflict in Libya, which started about four months ago.

So just based on face value, the timing seems questionable, and we have not even got into the philosophical debate as to whether SPR should be used as a market price equilibrium tool, which was briefly discussed in my previous article, but will not be the focus of this discussion.

Unlike the two previous releases by the IEA, currently there’s no similar crude supply shortage situation. Libya and Yemen are the two biggest concerns that the unrest could destabilize larger oil-producing countries in the region. However, these two nations produce less than 4% of the world’s oil needs, and Saudi Arabia and others have boosted output to make up for much of the shortfall.

In the U.S., crude inventory remains high at 363.8 million barrels as of June 17, above the average range, and there’s no dire shortage in products either (See Chart Below). 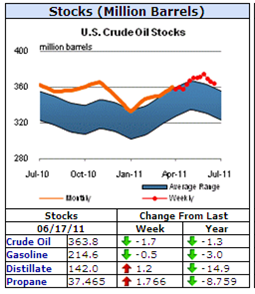 Outside of the U.S., stocks are building as well. From Oil Daily dated June 21:

“OECD commercial inventories for crude and products rose again in May, which came on the heels of an almost 1 million b/d jump in April….At 2.656 billion barrels, OECD inventories provide a solid cushion…”

If there such a “tight” European crude market caused by Libyan disruption as many, including the IEA, cited, then there should not be such a build in inventories in OECD.

Others believe the move by the IEA and the U.S. is to

Regarding the high gasoline and oil prices, the market is already in the process of taking care of that.

Crude oil was already collapsing to around $92 for WTI and roughly $112 for Brent, during the past week or so, mostly related to the deepening debt crisis in Greece, Europe, and a stalled U.S. economy with poor employment, housing reports, and a dried-up QE2.

Meanwhile, the robust China energy demand as touted by many Wall Street Banks is fading fast as China is still battling inflation, suggesting more monetary tightening which could ultimately slow down demand for oil.

Moreover, if the intention is to bust the uptrend of oil price, and since Brent is currently regarded as more of the global benchmark than WTI, there are several technical entry points where the government could have done the SPR release to bust traders’ momentum–for example, when Brent was at $100 to $115 levels in Jan/Feb, or around April when it hit $127 (See Chart Below)–all are more sensible than the current entry point. 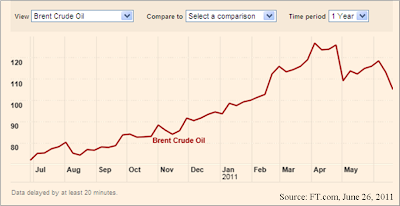 According to AAA, as of Sunday, June 26, the national average regular unleaded gas has dropped to $3.575 a gallon, or 10%, from almost $4 a gallon on May 6. Gasoline price is still up about 30% year-over-year. So if it is really about giving consumers a break at the pump, intervention should have been implemented at least six months ago to nip it at the start of the run-up (See Chart Below). 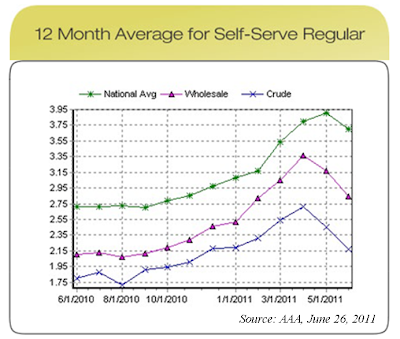 Based on supply and demand analysis, I have long contended that speculation is one significant factor in the recent surge of oil prices, particularly with Brent, since ICE exchange is essentially unregulated.

However, if you want to tap the SPR to quell the speculative enthusiasm, then the most effective timing of an SPR sale would be when players are predominantly long on oil.  In an April 2011 article, I questioned the SPR trigger release of the Obama Administration as despite much rhetoric, there was no action when Brent was reaching up to a record of $127, and gasoline in the U.S. was closing in on $4 a gallon.

Now that the markets are going through a correcting cycle and more speculators are taking the short position, the SPR release, instead of sending a warning message, most likely benefitted a lot of the speculators.

Even if we put aside the supply, price and economic concerns discussed so far, from a pure financial management standpoint, the U.S. government also failed miserably as you should sell close to the top, instead of at a near bottom.

Reuters reported that the U.S. will offer all 30 million barrels in one bid sale with a base price of $112.78 a barrel, which is based on the price of the Louisiana Light Sweet crude (LLS) in the five days prior to Thursday, June 23. Companies must submit their bids by June 29, and may bid above or below the base price. The payment and delivery are to take place in August.

From this SPR sale time table, the final sale price of the 30 million barrels most likely will be far less than the $112.78 base, and could even be closer to $95, as August is almost the end of the summer driving season, and more market weakness will start manifesting two months into the end of QE2.

Brent is already at around $105, and by my projection, WTI would be at $80 levels by September even without this SPR intervention when markets and Ibnaks can no longer ignore the fundamentals. So using the spread between the high of Brent at $127, which is the ideal time to sell SPR, a conservative estimate of the final sale price of $100 a barrel, and at 30 million barrels, it would suggest about more than $800 million of lost gross revenues.

More importantly, although oil prices have come down in response to the sudden additional SPR barrels, the effect will be temporary as it not only does not change the market supply and demand fundamentals, and also has interfered with the progression of a market equilibrium that’s already taking place.

Eventually, all the IEA members will need to replenish their SPR reserves, not to mention China has been busy building its strategic petroleum reserve and storage facilities since 2005, and will definitely take advantage of the newly cheaper crude prices, all thanks to the United States and the IEA.

Can you imagine what a global synchronized government crude buying program would do to prices?

Sell You Lose, Buy You Lose

Since the SPR is sold essentially at the bottom of the market, it mostly likely will cost a lot more to replenish, based on current economic projection.  The most ironic thing is that while trying to intervene the oil market, the U.S. government could end up driving prices further up than it would have been, and lose money both ways–on the sale and on the buy-back.

OPEC is now ever divided than before as evidenced by the failed production increase accord in Vienna. In one camp are Saudi Arabia and its Gulf State allies with a long view in favor of keeping a reasonable world oil price. At the other side are Iran, Iraq, Venezuela and Ecuador favoring a high oil price and oppose a production increase.

Nevertheless, after the failed meeting, Saudi has pledged to unilaterally pump more oil to keep the world oil price in check. Riyadh is the one with the significant enough capacity to influence the oil supply, whereas the Iran, Iraq etc. most likely cannot afford to reduce oil output thus sacrificing the much needed revenue to counter Saudi’s increase.

This coordinated IEA effort is supposed to go along side with Saudi’s planed increase and tide the market over till Saudi’s ramped-up production hits the market.  But on the other hand, this IEA action could tip the balance at OPEC as Saudi may see it is no longer necessary to go against other OPEC members on production issue, and OPEC would be one big happy cartel again.    .

Too Little, Too Late & Too Desperate

All in all, this oil intervention of the Obama Administration came too little, too late. To put it in perspective, the IEA estimate global oil demand for 2011 is 89.3 million b/d, so the 60 million is not significant enough to sway the oil market supply and demand equation.

Furthermore, due to the poor timing, the damage to the global economy has already done impacting consumer and corporation spending pattern, whereas the cost inflation has already built into the goods and services supply chain, and manifesting in the latest U.S. consumer inflation numbers.

And frankly, if the U.S. and other IEA member countries have to resort to SPR as an economic stimulus, it is just a testament to the colossal failure of (1) global monetary and fiscal policies, (2) the global synchronized quantitative easing, and the dire desperation of politicians for re-election.

U.S. Fed Chairman Ben Bernanke has basically admitted the failure of QE2 to revive the economy.  This SPR release acting as QE 2.5 is another waste of resource adding to the unmitigated disaster of the U.S. quantitative easing programs.