Today investors are dying for safe, and high yield. With interest rates close to zero, it is almost impossible to find good bargains in the fixed income sector. Either the yield is low or the bonds are more risky. This appears to be the case both in Government and Corporate bonds across the globe.

I have a friend who left a distressed debt fund about a year ago, because there were simply so few investments available he was scared that the fund would blow up.

Many US investors are either buying low yielding treasuries, or looking at emerging markets for higher yield. Brazilian 10 year bonds are currently yielding 12.5%. However, many investors are forgetting the lessons of the financial crisis mainly that with high yield comes high risk.

One exception appears to be Australia.

The Australian economy has had one of the most stable and sound political and economic systems across the globe. The Australian stock market, was the best performing stock market from 1900-2009, returning 7.5% after-inflation. This does not mean returns will be as high in the future. Rather, it shows how much the country has developed over the past 109 years.

With its well-implemented structural reforms and astute fiscal management, the Australian economy endured the global crisis better than almost any other developed countries.

Current GDP in terms of Purchasing Power Parity (PPP) is higher than that of UK, Germany and France. It has ranked 2nd in UN’s list of countries with the highest quality of life in 2009 and also the Australian economy ranked number 1 on Stanford University’s Sovereign Fiscal Responsibility Index (US ranked 28th). Australia which has an economy dependent on agrarian and resources, has witnessed an economic rebound since 2000.

Keeping in mind the economy of Australia, it is essential to mention some of the various reasons why the Australian bonds are attractive. The first reason is the speculation surrounding the US dollar currency. Over the past few months there have been numerous apprehensive monetary and fiscal policy talks regarding the increased government spending and the ever-increasing already large government deficit.

Such issues have increased doubts pertaining to the stability of US dollar currency and most investors fear the risks associated with currency volatility as the political instability further adds fuel to the fire. Clearly, in order to hedge against the currency risk, most investors find it viable to invest in foreign bonds, and as compared to other foreign currency bonds which are predicted to have almost no or negative yield, Australian bonds seem to be an attractive option as it has a yield of  ~5.4 to 5.6% on bonds maturing in 2015.

Talking about debt, despite the fact that Australia has been facing consistent deficit since World War II, it is impressive that they have been cutting debt at an increasing pace, making their public debt-to-GDP ~22%. Bearing in mind the ~22% debt-to-GDP ratio, the yield premiums on Australian Government debt are 3.25% higher than that of US Treasury debt for 5 year maturity. The fact the US treasuries and Australian Government bonds of the same maturity, considering the health of both economies is almost insane! The public debt to GDP ratio is ~22% in Australia and 92% in America ((IMF 2010 figures), and American debt is yielding 325 basis points more.

Australia is projecting a surplus in 2012. In America even under the most austere plans there is no hope of a surplus even by 2020. There is talk of Australia setting up a sovereign wealth fund, as the economy is projected to return to surpluses starting in 2012 for the next several years.

Australia has a healthy population growth rate, unlike most of the developed world, especially Europe (the topic of a future article) and Japan where the population is rapidly declining.

Additionally, the Australian dollar is more attractive as it is comparatively free from Government pressures and interventions.

However, despite the positive outlook towards the Australian economy, there exist certain problems pertaining to the economy which must be mentioned.

First, Australia is a major exporter of commodities such as iron, ore, gold, coal and wool but there is lack of presence of successful manufacturers which are export-oriented.

Second, Australia’s economy is heavily dependent on trade with China. If China crashes as some expect, there is a good chance it could take down the Australian economy with it.

Finally and most important of all; there is the rising concern regarding the emerging housing bubble in Australia. The inevitable decrease in the housing prices would lead to further increased government debt, as tax revenue falls and Government spending might increase to add stimulus to the economy.

Housing appears to be a massive bubble. A picture is worth a thousand words. So here is one picture: 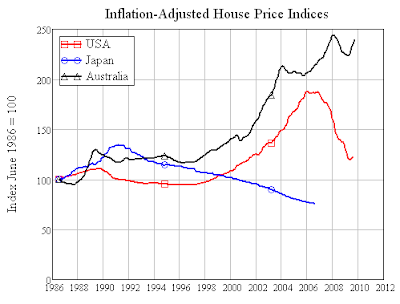 The anticipated burst of the housing bubble, and the consequential (likely) increase in government deficit would likely result in a decrease in Australian interest rates, which would lead to  a rally of Aussie Bonds. Therefore this would actually make Australian Government bonds rise in value! Right now interest rates in Australia are at 4.75%. So if there is a lot of room for them to be lowered in the event of a housing collapse.

However, such circumstances would lead to the Australian currency being devalued with investors impulsively switching to the US dollar as a safe haven.

However, investors might be interested in buying Australian Government debt and hedging against any possible decrease in the Australian dollar against the US dollar. I have not looked into hedging costs (it is not an area I am well versed in, here is a link to a calculator-http://fxconsulting.oanda.com/tools/hedging-calculator), but if they are low, Australian debt seems like a no brainer for any fixed income investor.

Nothing in this post should ever be considered to be advice, research or an invitation to buy or sell any securities. All investors must do their own due diligence.