ValueWalk
Home Technology The Retirement Risk Evaluator: Part One — Why We Need a New...

The Retirement Risk Evaluator is a retirement calculator that reveals to aspiring retirees the safe withdrawal rate (the inflation-adjusted amount that they can take from their investment portfolio to cover each year’s living expenses with virtual certainty that the retirement plan will survive at least 30 years) that applies for retirements beginning at any of the various possible valuation levels. The calculator permits the user to compare the results obtained for portfolios with different stock allocations and for retirement plans calling for different minimum ending balances. 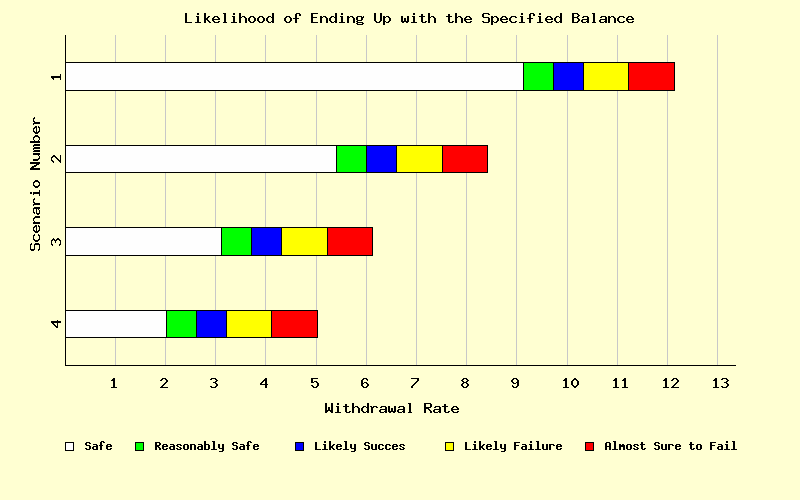 The volatility of stock prices causes particular problems for retirees. No investor enjoys seeing his portfolio value swing wildly upward or downward. But retirees have a special vulnerability. Since retirees are taking money out of their portfolios each year rather than adding money to them, dramatic price drops are more alarming. The combined effect of annual withdrawals to cover living expenses and dramatic price drops can cause retirement portfolios with heavy stock allocations to be reduced to small values in shockingly short amounts of time.

Imagine a retiree who started his retirement with $1 million of savings and who, noting that stocks have provided an average long-term return of 6.5 percent real, planned to withdraw $65,000 (6.5 percent of $1 million) to cover living expenses each year. In the Great Crash of the late 1920s and early 1930s, stock prices declined by 80 percent real. If a retiree were to see a similarly dramatic price crash take place in the early years of his retirement, his account could be depleted by the end of Year Four ($800,000 in losses plus $260,000 in withdrawals). This example unrealistically assumes (for purposes of ease of discussion) a portfolio invested 100 percent in stocks. But the principle being illustrated obviously applies (in a slightly less dramatic fashion) for any portfolio with a heavy stock investment.

Investors still in the process of accumulating assets can comfort themselves that their portfolios will recover in time. Retirees cannot safely assume that. And of course even price drops not dramatic enough to wipe out a retiree’s portfolio can cause great stress to investors no longer in the workforce.

It’s not much of a solution to the problem for retirees to avoid stocks. Non-volatile asset classes often pay returns of only 2 percent real or 3 percent real. Giving up an asset class that pays an average return of 6 percent real for one that pays a return of 2 percent real triples the amount of savings needed to finance a specified amount of annual spending. Retirees need to invest in stocks. But the volatility of stock prices make stock investing problematic for those in the withdrawal stage of the investing life cycle.

Financial planners have been telling retirees for years now that it is safe to withdrawal $40,000 per year from a $1 million portfolio. Since the 4 percent number is described as the withdrawal percentage that works in a worst-case scenario, retirees open to the idea of taking on a little bit of risk often elect to withdrawal something more than that, perhaps 5 percent or in less frequent cases even 6 percent of portfolio value.

A good percentage of the millions of retirements that have been constructed pursuant to these studies (and the retirement calculators constructed in line with their findings) are not safe. The methodology used in the retirement studies is analytically invalid, according to the wealth of research published over the past 30 years showing that valuations affect long-term returns.

It is true that the historical record does not today contain a returns sequence in which a retirement plan calling for a 4 percent withdrawal failed within 30 years. However, this reality should offer small comfort to retirees who took withdrawals for retirements beginning at the valuation levels that have applied since 1996. From 1900 forward, there have been only two cases in which we have seen the insane levels of overvaluation that applied from January 1996 through September 2008. In each of those two cases, retirements calling for a 4 percent withdrawal came within a whisker of falling. The fact that 4 percent withdrawals have come close to failing in both of the two cases in which they were attempted for retirements beginning at times of high valuations shows not that this withdrawal rate is safe in these circumstances but that it is risky in these circumstances.

Imagine that researchers were trying to determine whether it is safe to drive drunk. Say that they ran 50 tests in which sober drivers were asked to drive a 20-mile distance and that all of these drives were completed without incident. Then say that 2 tests were run in which drunk drivers were asked to drive a 20-mile distance and that in both of these cases the drivers were in major accidents that caused them to be paralyzed for life but that in both cases they ultimately pulled through. Would the researchers conclude that it is “safe” to drive drunk because in the two cases driving drunk only caused the drivers to come within a whisker of suffering death but not to actually die? They would not. The horrible results that we have seen in each of the two cases in history when retirees tried to take a 4 percent withdrawal from a portfolio with a high stock allocation for a retirement beginning at a time of high valuations shows us that investors retiring at times of high valuations need to take lower withdrawals if they want their retirements to be safe.

Numerous experts have acknowledged the problems with the Old School safe withdrawal rate studies. William Bernstein, author of The Four Pillars of Investing, has said that any aspiring retirees giving thought to using one of these calculators to plan a retirement would be well-advised to “FuhGedDaBouDit!’ Larry Swedroe, author of The Only Guide to a Winning Investment Strategy You’ll Ever Need, has described the research on which the calculators are based as “Garbage-In, Garbage-Out” research. Ed Easterling, author of Unexpected Returns, has noted that there are likely going to be many retirees working as greeters at WalMart as a consequence of our failure as a society to see that the conventional studies and calculators were corrected when we first learned of the analytical errors in the methodology used in the studies. There have been hundreds of threads discussing the errors in the Old School studies and calculators going back to May 2002, when I initiated the first such discussion at a Motley Fool discussion board.

The studies and calculators have not been fixed because fixing them would require a widespread public acknowledgment of the flaws of the popular Buy-and-Hold model for understanding how stock investing works. Buy-and-Hold was developed at a time of widespread confidence in the Efficient Market Theory, which posits that stocks are always priced more or less properly. Yale Professor Robert Shiller’s 1981 research showing that valuations affect long-term returns challenges this belief (if stocks were always priced properly, the concept of overvaluation would be meaningless and valuations could not predict long-term returns). From 1981 through today, we have been living through a transition period in which the experts’ confidence in the Buy-and-Hold Model has been greatly diminished but in which most experts have felt too cowed by the continued popularity of Buy-and-Hold to develop alternative models more in accord with our new understanding of the message of the historical data.

Rob Bennett is the owner of the www.PassionSaving.com site. He recently authored a Google Knol entitled “The Bull Market Caused the Economic Crisis.”